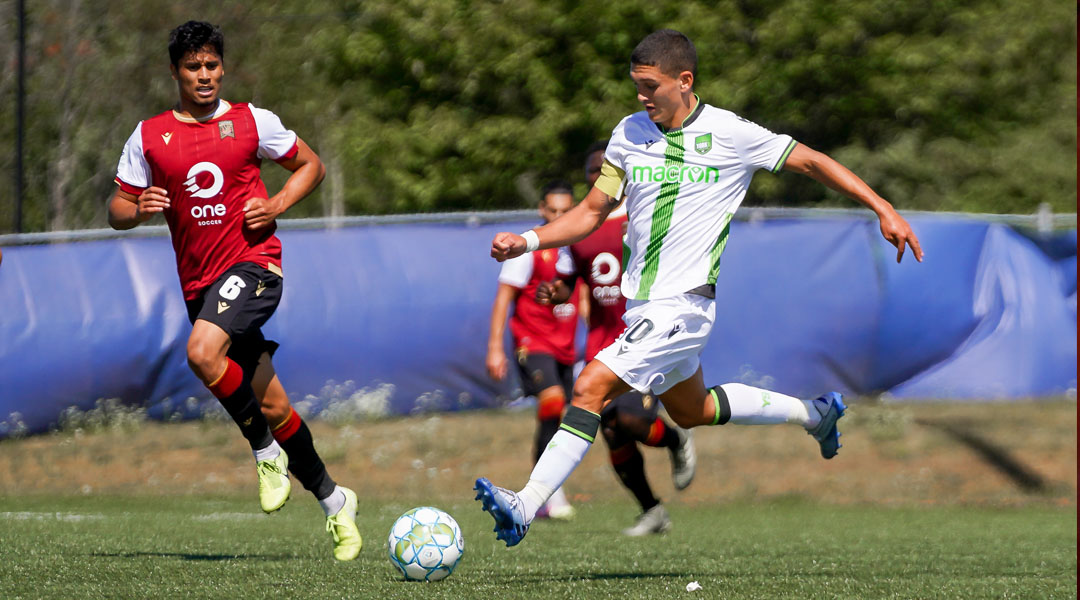 Canadian Premier League sides York9 FC and Valour FC battled to a nil-nil draw on Saturday afternoon, with the typically-high-scoring matchup seeing plenty of hotly contested action without anything to show for it.

The result leaves the Nine Stripes on three points after three games played, while Valour FC rest at four. With the four bottom placed teams each having a game in hand, one feels neither York9 FC (fourth) or Valour FC (third) will be too happy about sharing a point at this stage of The Island Games.


Rob Gale trusted Austin Ricci to make a statement against his old club, with the 24-year-old striker backed by mix of new and old midfielders in Masta Kacher, Moses Dyer, Raphael Ohin, Diego Gutierrez, and Fraser Aird. The centre back pairing of Andrew Jean Baptiste and Julian Dunn didn’t come as a surprise, with the duo combining to show a marked improvement over the side’s defensive performances last season.

Meanwhile, York9 FC gaffer Brennan would start hometown boy Michael Petrasso against his old club while fielding an unchanged back four of his own. Centre-back Roger Thompson has proven to be a physical embodiment of Brennan’s ball-forward philosophy: going into the match, he led the side in attempted passes (129), nearly half of which took place in the opposition half.

The opening first half saw plenty of competitive action between the sides, with both York9 FC and Valour FC registering several shots, getting good opportunities, and showing patient buildup. The competitive spirit shown today led to some physical altercations, with both Manny Aparicio and Raphael Ohin going into the books shortly after Andrew Jean-Baptiste and Ryan Telfer got into it.

The hotly contested match also saw Michael Petrasso go down, with youngster Max Ferrari coming on to replace him. With Petrasso having won 3/4 of his duels with a 100% passing rate, he’s a figure that will be a sore miss for the Nine Stripes – especially since his rocky injury history isn’t indicative of a fast return to action.

At the top of the second half, York9 FC would force the ball into the box with youngster Ferrari finding himself with a good shot chance, but his scuffed effort simply trickled out for Pantemis to collect.

Brennan would hand a debut to former Forge FC player Jace Kotsopoulos as the second half wore on, with the striker coming on for Alvaro Rivero to make his debut for his former rivals.


Minutes later, Masta Kacher would nearly collect a through ball that split the York Region side’s defense, but Nathan Ingham was able to collect the ball and keep it out of the net. Kotsopoulos would then get a chance of his own ten minutes from time, entering a one-on-one race to the ball against Valour FC goalkeeper James Pantemis, with the goalkeeper winning the duel.

Valour FC substitute Shaan Hundal would fire a nicely placed shot beyond Ingham in the game’s dying minutes, but the whistle had already gone for offside and the scores remained level.

After conceding in added time against Pacific FC in their last match, the Nine Stripes almost scored this time around when Ryan Telfer fired a shot just wide of the post in the ninety second minute.

Despite both sides getting a handful of good opportunities, neither side was able to break the deadlock with the match ending nil-nil.

The Nine Stripes will now look towards the 905 Derby this Wednesday, and at this stage of the season it’s fair to say that the club will likely need to pick up momentum against their biggest rival if the side is going to have a good chance of staying in the top four.

Meanwhile, Rob Gale’s Winnipeg-based side will square off against Pa-Modou Kah’s Pacific FC on Tuesday, with the west coast side also slated to kick off against Forge FC in just one hour.