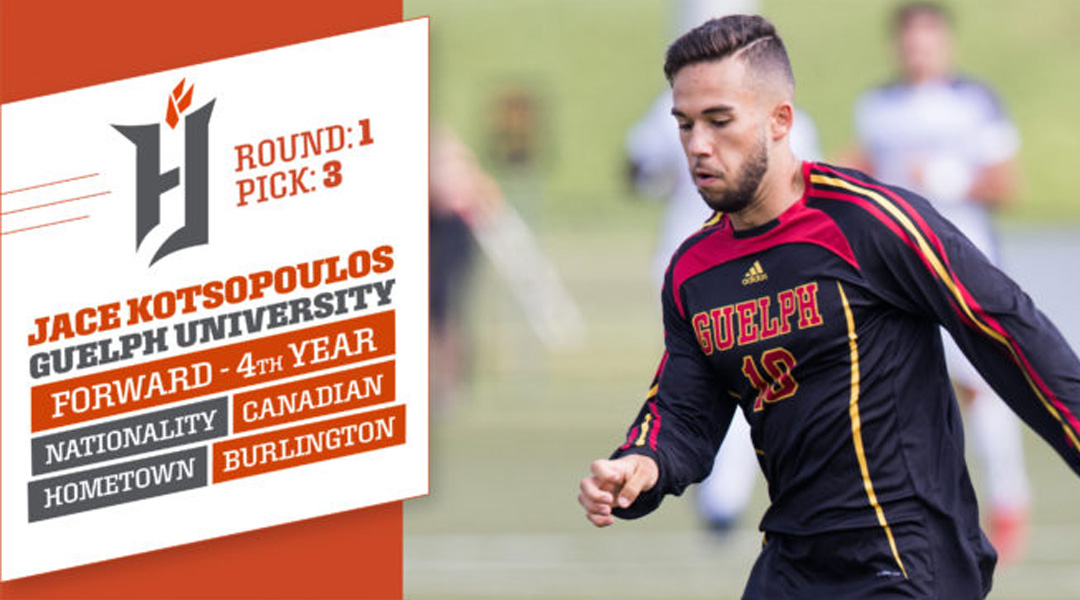 UPDATE: Jace Kotsopoulos has confirmed with us that he’s still keen to sign with Forge FC, stating he hopes to complete the paperwork in the next few days.

The Canadian Premier League made a smart move when it partnered with U SPORTS to allow students a chance to test their mettle at the pro level without ruining their eligibility to return to University-level competition at a later date. A blind draw in November saw Hamilton side Forge FC get third pick overall, with head coach Bobby Smyrniotis quick to claim Guelph Gryphons forward Jace Kotsopoulos – an exciting prospect who hasn’t actually signed with the Hamilton-based side as of yet.

Forge FC‘s Smyrniotis was impressed with how the forward could convert from both inside and outside of the box, where he’s been absolutely ruthless at the varsity level. This efficiency is already paying off for Jace, as he’s just been nominated for the U SPORTS Male Athlete of the Year award.

Hailing from Burlington, Ontario, the Economics major completed four years of a tremendous varsity-level career at the University of Guelph, where he scored an incredulous 53 goals in 57 appearances. His most recent year of play saw him convert 15 goals from 34 shots in just 15 appearances, a feat which made him one of the more predictable first round picks from the CPL-U SPORTS draft.

If Kotsopoulos chooses to take his first post-collegiate steps outside of the Canadian Premier League, he may not be the only first-round CPL U-SPORTS Draft to do so. Gabriel Bitar was picked by Cavalry FC as the number one overall pick, but he hasn’t signed a contract with the Calgary side – and they’ve now filled 22 out of 23 possible roster spots. It hasn’t been all snubs, however, with York University first round picks Dylan Carreiro and Daniel Gogarty both signing on with Valour FC and York9 FC respectively. Plenty of other CPL U-SPORTS picks have signed on, too.

With a good shot at wining the U SPORTS Athlete of the Year award, Kotsopoulos would be an exciting addition to the league. He still has Forge FC listed on his Instagram profile, but with the season due kick off in front of 25,000 fans 4 days from now, it’s really coming down to the wire regarding his potential signing.