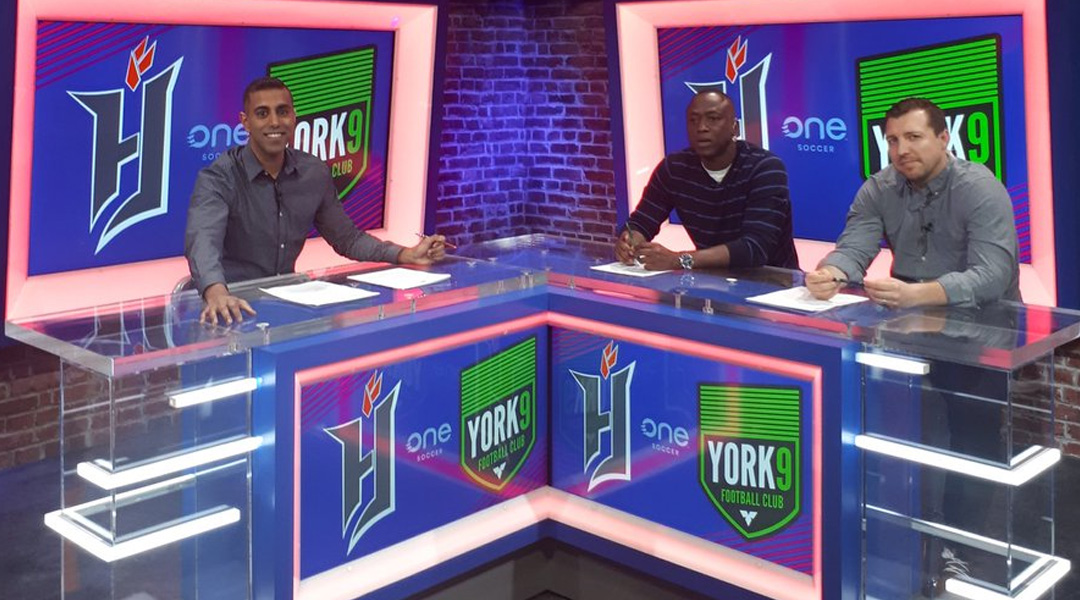 Update: Kyle Bekker has now recurved a two-match suspension for this incident.

It was a well-contested affair between Forge FC and York9 FC as the rival clubs kicked off the Canadian Premier League, with both teams eager to establish themselves as the dominant local side. The 905 Derby set the tone for a physical game, with both sides committing fouls as the league’s first match went underway.

Forge FC Captain Kyle Bekker found himself in hot water halfway through the game when he clashed with Joseph Di Chiara, who was bending over to pick a ball outside of play. Bekker rushed in and caught him with a fast-paced elbow to the face, with Di Chiara going down in a heap. Nearby players immediately swarmed the scene in mass argument, with Bekker pleading his case to the assistant referee.

Bekker made his way out of the incident card-free, but retired Canadian international Alex Bunbury thinks this was one of Gantar’s few mistakes of the afternoon. In Bunbury’s mind, that was a clear red.

That’s a red card. You cannot hit a player off the field, and Bekker should know better. He’s played at the highest level. I think he lost his composure, maybe [got] a little bit frustrated. The result at that time was against them, but you have to keep your composure. He’s the leader on the team, he’s the captain, and you have to set examples when you’re leading and that was not a good example on his part. Hopefully he’ll learn from that, and we’ll never see that again. I have a problem with him not receiving a single card. He didn’t even get a yellow card on that play. For me, that is unacceptable. You have to set an example.
You cannot do that to a defenseless player – I’ll keep saying that until I’m blue. You deserve to be cautioned.

CPL Editor Kurt Larson agreed that it could have been a red card, but this was much clearer with the benefit of replays. The Canadian Premier League doesn’t have the benefit of something like VAR, so referee David Gantar erred on the side of caution before awarding any cards.

Larson also raised another point of contention: because Gantar and the match officials had missed the foul, it’s possible that a disciplinary committee could give out a post-match suspension to Bekker. While Clanachan stated that the league would play a ‘clean game’, the Canadian Premier League hasn’t confirmed that it has a disciplinary committee in place. In any event, Bunbury ultimately thinks that Bekker came away quite lucky to stay on the pitch.

While Forge FC captain Kyle Bekker avoided becoming the first player in Canadian Premier League history to get either a yellow or red for his foul, York9 FC captain Manny Aparicio ended up doing both. He got a yellow for a bad challenge on Borges, and then in the last minute of the game picked up another for persistent fouling. He was emotional after the game, though York9 FC manager Jim Brennan said he was pleased with how well Aparicio had played on opening day.

All-in-all, it was a dramatic opening game for the burgeoning league: 2 goals, a bicycle kick attempt, a struck crossbar, a red card, and several near-misses meant quite an exciting affair. For the most part, it seems, Gantar did quite well in his officiating duties – but Bekker’s foul will be a point of contention between the two sides.

As for Joseph? He’s fine – a strong indication that fans can expect the Canadian Premier League to be a tough, physical environment, even if sometimes unfairly so.

We’re big boys. We can use the physical side of the game to our advantage, and I think today we did.

Fans interested in Alex Bunbury’s punditry should enjoy it while it lasts, as the retired Canadian striker is largely intent on starting a CPL club of his own. Bunbury has been quite public about his intentions on establishing a team in Laval, stating that a Canadian league needs at least three teams in the Quebec region. Reports of at least five ownership groups looking at Quebec have surfaced, meaning the province of Quebec should likely find itself hosting one of the league’s first expansion teams.