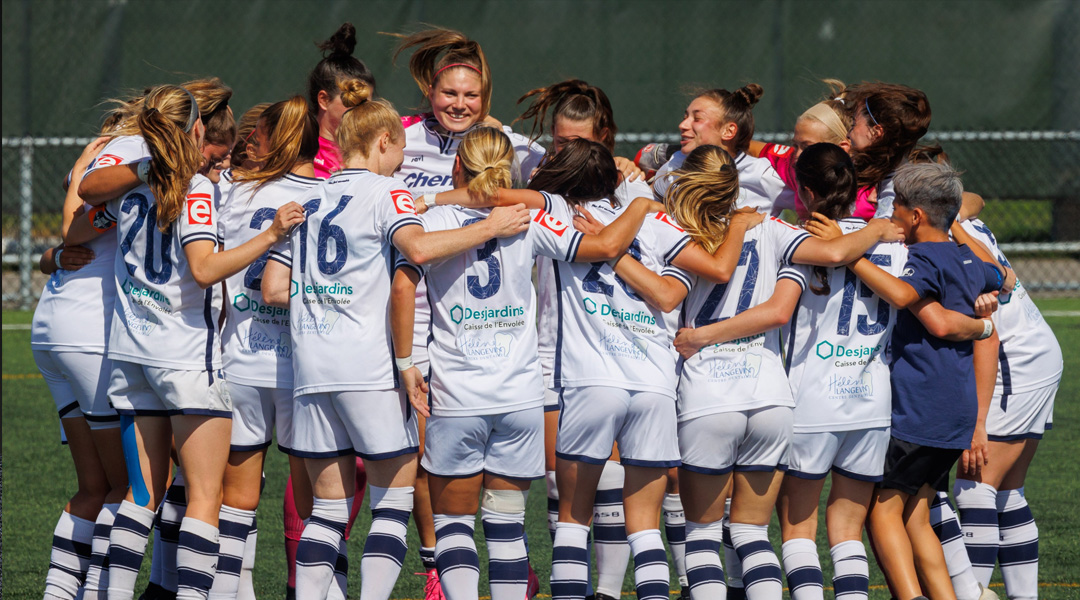 The first-ever League1 Canada Inter-Provincial Championship took place in Laval this weekend and provided goals aplenty as four teams duked it out for pro-am honours at Le Complex Sportive Bois-de-Boulogne.

The competition saw AS Blainville (PLSQ), AS Laval (PLSQ), Alliance United (League1 Ontario),and Varsity FC (League1 BC) compete for the inaugural cup, with favourites AS Blainville putting plenty of proof in the pudding to justify the high expectations placed upon them.

The team entered the competition as the only one of the four to have won their respective league, surmounting second-place regular season finishers AS Laval in the all-PLSQ cup final.

They dispatched Varsity FC 2-0 en route to this, scoring in just the second minute before following up with a second-half screamer from Alexie Bellrose to seal their path to the cup final:

The other semi-final saw AS Laval through to the final after seven rounds of penalties against Alliance United. With a goal apiece after ninety minutes, it was the host team who buoyed themselves on to the all-PLSQ matchup when all was said and done.

Les Blainvilloises got the proverbial ball rolling in the first half through a ferocious driving run from captain Megane Sauve, who used a deft touch to launch herself from between two AS Laval players before running beyond another to fire home the go-ahead goal from a tight angle:

The historic final would be largely decided in the span of just a few minutes in the second half, with Lorie Thibault slamming a right-footed shot near-post beyond Kelly Cantin after muscling her way through the defense. Straight from kickoff, the favourites cemented the status quo by immediately winning possession before meeting a smart run from Audrey Ann Cardinal, who sealed the match with a well-placed low finish.

AS Blainville saw out the second half with a controlling amount of possession, stifling every AS Laval hope of a shock comeback. With the final whistle from referee Myriam Marcotte, the PLSQ champions added a brand new trophy to the club cabinet as the first-ever winners of the League1 Canada Inter-Provincial Championship.

The third-place match between League1 Ontario’s Alliance United and League1 BC outfit Varsity FC ended with penalties required after a fiery 2-2 match, with Alliance expunging their penalty demons to claim bronze in a hearty 4-1 shootout win.

Newly-formed Varsity FC had opened the scoring with a clinical finish from Sophie Damian in the thirteenth minute of the bronze medal match, with the club doubling the lead through Katalin Tolnai not long after. Alliance would claw one back just before half-time through a Chelsea Chung tap-in, paving the way for a stellar comeback as Madison Mariana equalized through a freekick a half hour from full-time. Penalties then proved to be a much less of an even affair.

With the newly-formed competition being hailed as an important step in a national alliance between the three pro-am leagues, Laval played host to plenty of scintillating soccer through an action-packed weekend. The League1 Canada competition is slated to return in 2023, likely with a new host city and, of course, more goals to come.

Next year will also see a men’s inter-provincial championship launch, with a similar format expected.