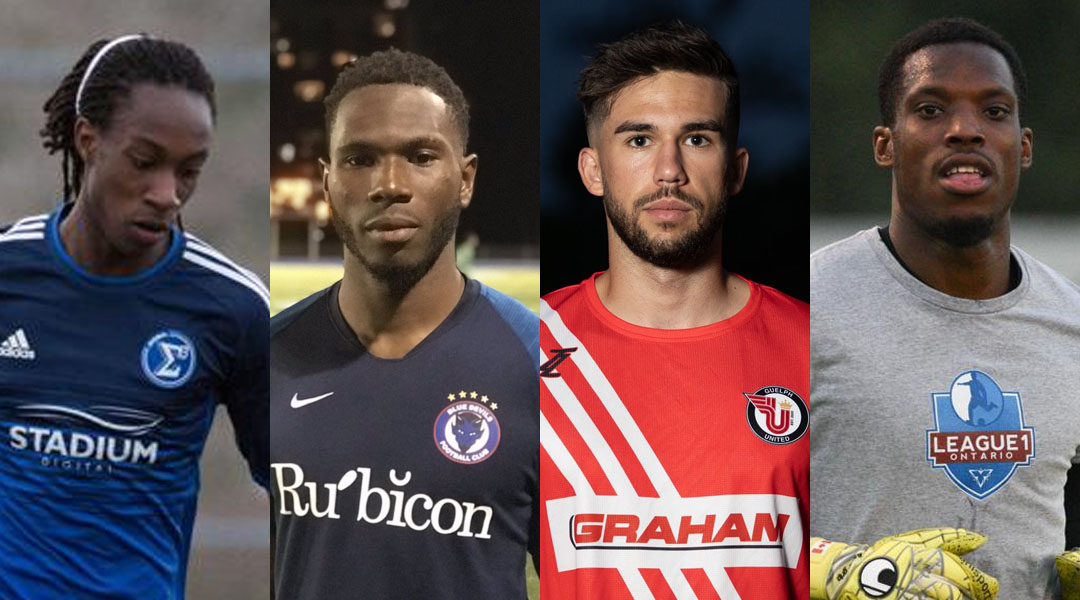 Here’s a quick look at some familiar players that Canadian Premier League fans may want to keep an eye on while they’re in League1 Ontario:

The newest League1 Ontario expansion side has recruited Quillan Roberts as a player-coach, with the inaugural season CPL champion almost certainly expecting to be the club’s top goalkeeper choice.

Before getting his chance at a number one spot at the CPL level, the 26-year-old had spent the majority of his career serving as a depth option in MLS, spending some seven years in the US top flight without making any appearances.

Still, he’s no stranger to League1 Ontario action, either: Roberts spent a year with the Woodbridge Strikers in 2017 before making eleven appearances for Forge FC two years ago, helping the team to a North Star Shield while getting some Concacaf League action under his boot, too. All-told, Roberts is expected to be a highlight keeper in the league.

When Guelph United was announced in January, the club wasted little time in making big moves: the team recruited no less than three former CPL athletes, with an additional two signings having come inches from signing in the professional domestic league, too.

The newly-formed League1 Ontario side made its inaugural signing with Jace Kotsopoulos, who had signed a U SPORTS contract with Forge during its title-winning campaign in 2019 before crossing 905 Derby lines to sign with York9 FC (now York United) at The Island Games. The ambitious League1 Ontario team also brought in former Halifax Wanderers striker Tomasz Skublak and Valour FC midfielder Nico Galvis, too.

The League1 Ontario expansion side will be relying on former Valour FC emergency goalkeeper Svyatik Artemenko to mind the net as the club’s number one, with the 21-year-old now in Ontario after training with Valour ahead of this year’s bubbled start to the CPL season. Guelph United has also recruited former Forge draft pick Alexis Zis, a prolific talisman for the Guelph Gryphons who was selected by Forge in the 2019 CPL-U SPORTS Draft but never ultimately signed with the team.

With those highlight additions among an ambitious squad, perhaps it’s no surprise that Guelph United began its campaign with a 6-0 win over FC London this weekend, with Kotsopoulos landing a hat trick and both Skublak and Zis also finding the net.

Former Toronto FC Academy prospect Cyrus Rollocks had spent time with current League1 Ontario title holders Master’s Futbol Academy before signing with York9 FC (now York United) in 2019, where he went on to make nine league appearances for the Nine Stripes before being released at the end of the season.

He now joins Oakville-based outlet Blue Devils FC, who are led by longtime coach Duncan Wilde. He’s already off to a hot start back in the League1 Ontario level, scoring a brace against North Mississauga SC and collecting man of the match honours on his debut.

Both Christopher Campoli and Danial Rafisamii were drafted by York United in the 2021 CPL-U SPORTS Draft, though neither were included in the club’s travelling roster for the bubbled start of the CPL season.

The duo stem from Ontario Tech University, where the Woodbridge-born Campoli contributed six goals and six assists in just sixteen appearances, while the 19-year-old Danial Rafisamii put in a tireless season in the middle of the pitch that evidently caught Jim Brennan’s eye.

Both are no strangers to League1 Ontario, with the duo having suited up for Toronto Skillz FC whilst Campoli also spent time with the Woodbridge Strikers.

With last season’s Nine Stripes draft picks Stefan Karajovanovic and Isaiah Johnston both playing well in the league this year, there’ll be a lot of eyes on this year’s picks to see if they can eventually get their foot in the door.

This Mississauga-based team was always going to be on the list: as the feeder club to reigning CPL champions Forge FC, fans have already seen no less than five Sigma products sign deals with Forge in the last two months alone.

Former Forge FC players Klaidi Cela and Kadell Thomas have both returned to Sigma, with the former having undergone knee surgery last year while the latter has already impressed during preseason back with Sigma.

While both Robert Cleary and Sebastian Castello are still with Forge on developmental contracts, they’ll be available for Sigma this season too – in fact, Castello put in a shift for the side this weekend, finding himself on the scoresheet just one day after coming on as a substitute for Forge against York United.

All-told, fans will likely see some additional Forge recruits on developmental contracts simultaneously feature for the high-profile League1 Ontario side, too.

It’s also worth noting that defender Kyle Walton will be with Sigma FC this year. He trialed with York9 FC (now York United) in 2019, and was with Atletico Ottawa for its preseason last year before the potential move ended due to an injury.

With League1 Ontario clubs having plenty of roster flexibility, there’s likely to be several more CPL-to-League1 Ontario players to watch throughout the campaign. Still, the above list of athletes represent some key names to watch as summer unfolds for the semi-professional league with fans in the stands.