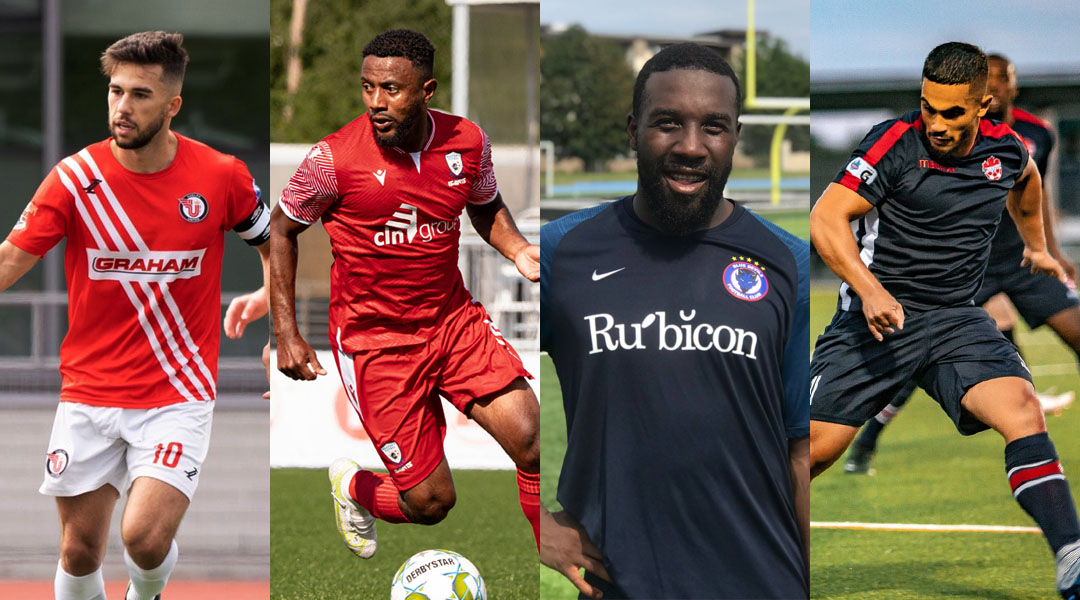 The League1 Ontario semi-finals are set.

Guelph United and Master’s FA will be duking it out at Alumni Stadium on October 30, while Vaughan Azzurri and Blue Devils FC will play their semi-final the following day at North Maple Regional Park.

Expansion side Guelph United finished top of the west with an impressive record of ten wins and two losses through its inaugural campaign, with a league-leading 42 goals catapulting the newly-minted side into its first-ever playoff position.

Related: Guelph United Off To Hot Start In League1 Ontario

The club’s goalscoring charts are led by golden boot favourite Jace Kotsopoulos, who joined as the side’s first-ever signing and has since bagged thirteen goals in eleven matches. The former Forge FC and York United striker isn’t the only ex-CPL athlete on the roster, with Tomasz Skublak contributing nine goals and former Forge draft pick Alex Zis tallying up a further eight.

On the other end of the pitch, former Valour backup goakeeper Svyatik Artemenko has kept the goals against ratio down to 1.27 per game, suggesting that the club enter playoffs with a very real shot of going all the way.

They’ll be hosting reigning champions Master’s FA, who finished as runners-up in the east this year after six wins, three ties, and two losses. Former TFC II prospect Reshon Phillip has been in blistering form for the side, scoring eleven goals in seven appearances.

Club owner Junior Groves says fans will always get their money’s worth when Master’s FA arrives to play, and his team will be hungry to capitalize on a chance to retain its title and get a berth into next year’s Canadian Championship after succumbing to a 5-0 loss against York United this year.

The Vaughan Azzurri comfortably won the right to host the other semi-final after going undefeated in the east to finish top with ten wins and just one draw, which means they’ll also be presented the Supporters Shield trophy ahead of kickoff.

The side scored more goals than any other team in its division, and conceded the least in the league: expect a tidy performance from a familiar favourite that has helped produce players like Kamal Miller, Alistair Johnston, Ryan Raposo, and a significant number of current CPL athletes, too.

What a season for this group of special young men – very proud of their commitment and brand of football played. We aren’t done yet, as the playoffs await us.

They’ll be facing the fourth and final club to have secured a playoff position, with Oakville’s Blue Devils FC securing the spot following a 2-0 win over FC London this weekend. The side has seen good form from forward Leaford Allen and former Nine Stripes striker Cyrus Rollocks, who’ll be facing a tough test against a resolute Azzurri defense.

Related: Canadian Premier League Athletes To Watch Out For In League1 Ontario

Blue Devils defender Adam Czerkawski – who began the season captaining Master’s FA – told Robin Glover that he’d love to advance to a final against his former side, though he’ll need to hand Vaughan its first defeat of the season to have the opportunity – and that’s only if the Saints surpass a prolific Guelph United side, too.

Whoever ultimately champions League1 Ontario are in for more than medals, with the winner set to compete in the 2022 Canadian Championship, too. All but one of the four finalists have participated in the domestic cup before, with the exception being the newly-minted Guelph United.

The semi-professional league recently announced that its next season will see the return of Pickering FC, along with the addition of expansion teams Simcoe County Rovers and Electric City FC, who acquired league licenses from Aurora FC and Toronto Skillz FC respectively.