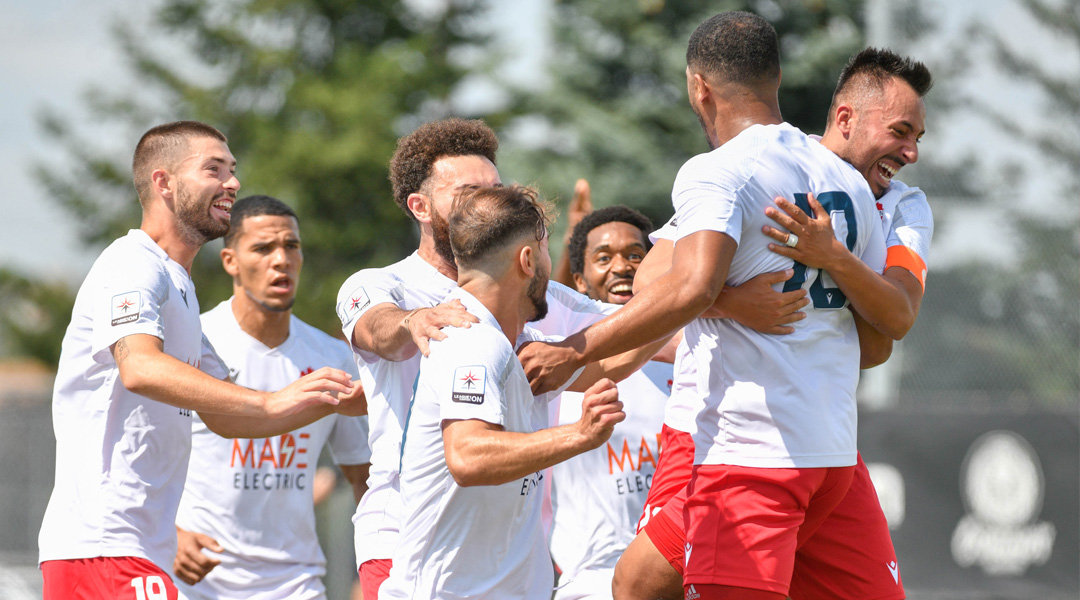 Last night saw Vaughan Azzurri hoist the League1 Ontario 2022 championship trophy after a blistering 5-1 victory over the Blue Devils, with a hot summer afternoon at the Ontario Soccer Centre also cementing an invincible season for Patrice Gheisar and his team.

While the Blue Devils were well-beaten on the day, the two-time champions can reflect on a strong season that saw them come within 90 minutes of their first league win since 2019.

The perennial League1 Ontario favourites booked their tickets to the final after landing first and second in regular season standings respectively. Both earned byes into the semi-finals, where they procured narrow victories over the Simcoe County Rovers and Alliance United.

With that, the 2022 League1 Ontario final was set. Here’s how it went down:

The Vaughan Azzurri marched onto the Ontario Soccer Centre field with a familiar line-up that boasted no less than five former CPL talents, along with tied-for-first golden boot leader Massimo Ferrin. The Blue Devils lineup had League1 Ontario heavyweights aplenty too, with veteran Kyle Porter slotting in alongside the likes of the prolific Taha Ilyass and CPL hopeful Brandon Duarte.

Referee Ryan Schwenger started the proceedings with a short blast of the whistle, and it didn’t take long for warm summer afternoon to procure some goals: Vaughan’s Kosi Nwafornso demonstrated some familiar hold-up play before sending the ball through to Jason Mills, who put the opportunity beyond Lucas Birnstingl to give Vaughan the lead in the 16th minute.

Taha Ilyass – who had scored a brace against Vaughan in the regular season – soon sent in a nice cross to Matthew Santos, who’s volley went off target. Two minutes later, the missed opportunity would sting some more as former Halifax Wanderers defender Alejandro Portal broke through into the Blue Devils box to provide a nice cut-back pass for Kosi Nwafornso. He doubled the lead for Vaughan.

As the first half wore on, Duncan Wilde’s Blue Devils side continued to apply pressure with an opportunity from Khody Ellis that was well stuffed-out. Nwafornso would continue to be a thorn in their side, however, with the forward earning a penalty after getting tripped up in the box. Up stepped Massimo Ferrin, bagging his 24th goal of the campaign to make him the de facto top L1O goalscorer of the year.

Things went from bad to worse for the beleaguered Blue Devils in added time of the first half, with Nwafornso beautifully executing a chip to make things 4-0. Before Schwenger signaled the end of the first half, however, the Blue Devils finally struck back as Taha Ilyass made a quick turn in possession and fired a ball beyond Gianluca Catalano to set the half-time score at 4-1.

The second half was barely underway before Vaughan took the wind out of the Blue Devils’ proverbial sails, with Justyn Thomas sending in Kosi Nwafornso yet again. The forward bagged his championship hat trick to restore a four-goal cushion for the perennial favourites.

The tempo would falter somewhat after that, with both sides carving out a few chances as the clock ticked ever closer to a resounding win for Patrice Gheisar and his Vaughan Azzurri side. With the final whistle came jubilant celebrations for Vaughan, while the Blue Devils will be left wondering what went so wrong on the big day.

The victory sees the Vaughan Azzurri become the most successful League1 Ontario team of all time, having hoisted the championship trophy three times over the Blue Devils’ two. Last years champions Guelph United missed out on a postseason run by one point.

Patrice Gheisar’s side have also qualified for the 2023 Canadian Championship through the victory, which will likely see them paired up against CPL opposition next year. They proved worthy competitors in the domestic cup back in 2019 when they fought the Halifax Wanderers to a 3-3 aggregate result that only saw them bow out through away goals.

For now, however, it’s a well-deserved moment of celebration for an invincible Vaughan Azzurri side that plays host to a wealth of talent in the province, and several faces that seem worthy of a new opportunity at the professional level.