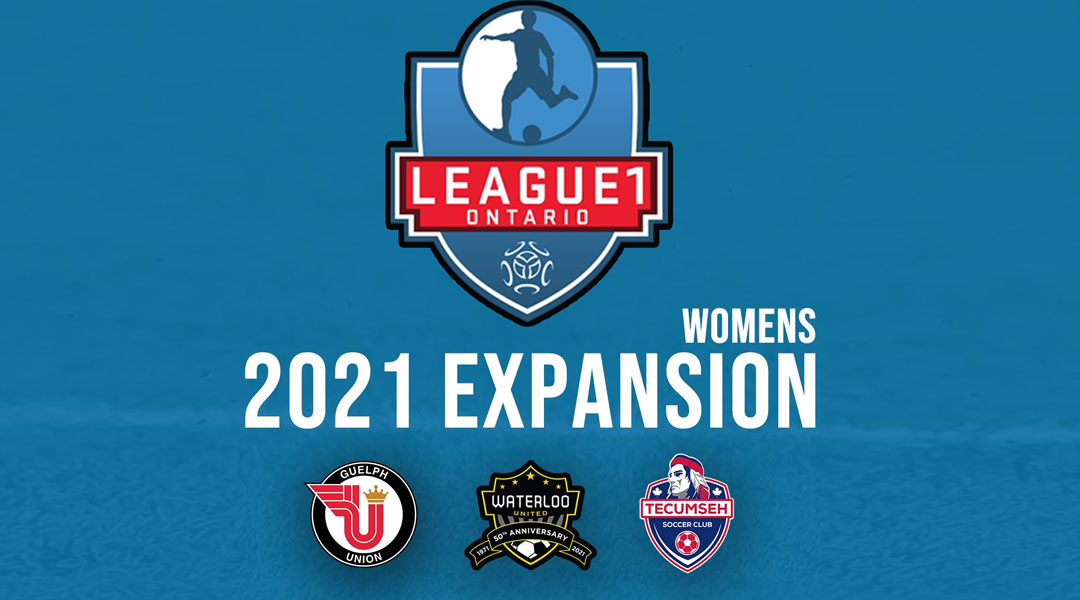 The Women’s Division of League1 Ontario will see three new expansion sides join the semi-professional league for the 2021 season, with today’s new additions stemming from Waterloo, Guelph, and Windsor.

All-told, that means that fifteen clubs are currently set to participate in the seventh League1 Ontario Women’s Division campaign, which saw its sixth season cancelled last year due to the COVID-19 pandemic. Evidently, however, that hasn’t halted its overall growth.

We are delighted to be able to significantly expand the footprint of the Women’s Premier Division across Southwestern Ontario, creating fantastic new opportunities for talented young women to play at the highest level in their home community or region.

Here’s a breakdown of the new clubs, two of which were also revealed to be launching a men’s expansion team last week:

Establishing a League1 women’s program is an exciting next step for our organization and our community. This program aligns with our efforts to get more women and girls playing and remaining in the game. Our vision as an organization is to keep high-level female athletes visible in our community and inspire our players to dream big.

The team has also partnered with the University of Guelph, the Lang Innovation Team, and a local advisory committee to help launch the club.

The Tecumseh Soccer Club was formed in 1999, with the Windsor-based side first obtaining an OPDL license in 2017 and a National Youth License in 2019. As a leading Southwestern Ontario club that already has two established U-21 sides, expanding to League1 Ontario now allows Tecumseh to offer elite football on the women’s side of the game, too.

We are excited to complete our female high performance pathway with the addition of a League1 Ontario team. With two established U-21 teams, and a large youth OPDL player pool, joining League1 allows us to continue to offer the top level of girls and women’s soccer in Ontario. As a club, our key objectives are to continue to provide players the pathway to maximize their potential and prepare them for the optimal level of competition, whether it be NCAA, U-SPORTS, CCAA, or professional.

The top level women’s team of the Waterloo Minor Soccer Club (also known as Waterloo United), the side is celebrating its fiftieth anniversary by launching League1 Ontario men’s and women’s teams at the same time.

Waterloo United is pleased to add a women’s team to League1 Ontario. It is important for us to offer this level of competition for both the young men and women of our Club.

Despite the COVID-19 pandemic ultimately resulting in the cancellation of last year’s season, the semi-professional league states that an unprecedented number of organizations are in the midst of applying to join the League1 Ontario Women’s Division, with Rossi stating that the league expects to pursue more sustainable growth in the coming years.

Out west, the impending (though still unconfirmed) launch of League1 BC will see the women’s game grow at a higher level in British Columbia, too.

Despite the positive news, York United Club President Angus McNab also recently revealed that the Canadian Premier League’s prospective affiliate League1 Ontario Women’s Team was not a near-future possibility, though the club was looking to support and champion the women’s game by alternative means. Further north, Aurora FC was not included in the 2021 club list for both the men’s and women’s division this year.

In December, Women’s Division Commissioner Carmelina Moscato stepped down from her role with the league. Her replacement has yet to be announced.

The last full season of action in 2019 saw the Blue Devils win the regular season, though it was FC London that ultimately lifted the trophy once playoffs came to an end. The 2020 season was then cancelled, with the league evidently hopeful for a return to play this year.