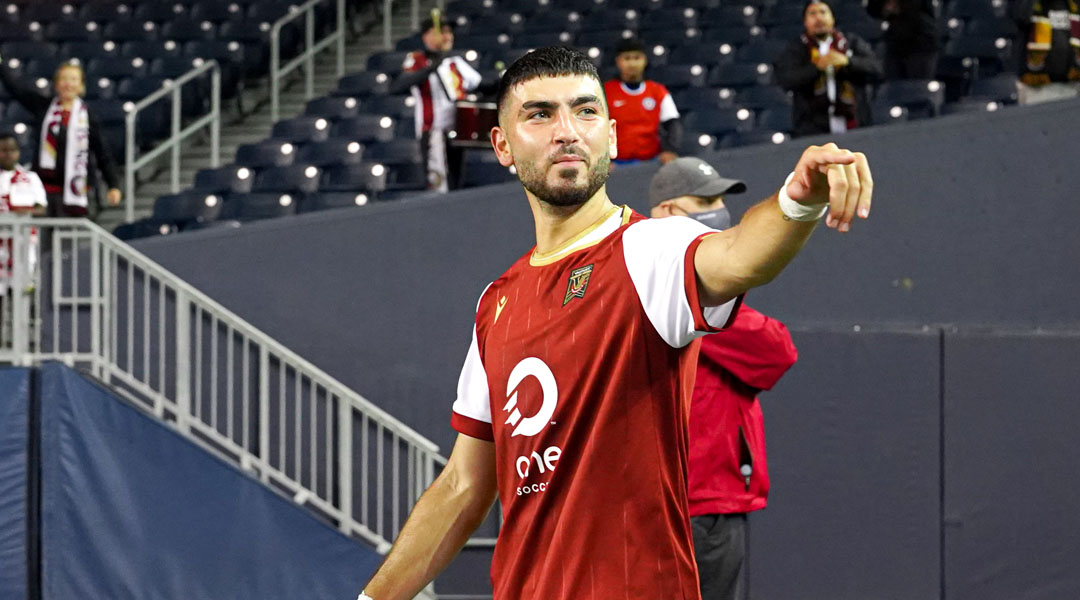 This October will see Valour FC defender Tony Mikhael enjoy two separate stints with the Lebanon U-23 national team, with an important stretch of club matches placed in the middle amidst a crucial playoff push for the Winnipeg-based CPL team.

For a 21-year-old in his rookie CPL season, the odds that he would find himself in the midst of such a packed month weren’t high, but Mikhael always says he’s always been ambitious – and a bit unrealistic – with his goals. This October, that appears to be paying off.

This weekend, the Lebanon U-23 side announced that Mikhael has been called up for the West Asian Games in Dammam, Saudi Arabia. Described as a friendly tournament aimed to help countries prepare for the AFC U-23 Asian Cup qualifiers later this month, the experience will be his third stint with the youth national team, and one where he’s expecting to see game time against the United Arab Emirates, Iraq, and Palestine.

The Valour FC defender has already departed for Dammam, where he will join the Lebanon U-23 side from October 4 to October 12. Instead of remaining with the U-23 side straight through until the Asian Cup Qualifiers begin on October 23, however, Mikhael will return to Valour FC for twelve days during a pivotal moment for the Winnipeg-based side.

With the club having slipped out of a playoff position, it says a lot that new boss Phillip Dos Santos wants an in-form Mikhael available during a stretch that includes a clash against top-of-the-table Pacific FC, and what will be seen as a must-win against bottom-placed Atletico Ottawa.

We had that conversation on the second or third day that was here. Phil is keen on me going, he thinks it’s an important call-up for me and I think he understands the impact it will have on my development. I’m happy that he’s given me the green light to go, and I think he wants what’s best for me, for sure.

Having been called up for Lebanon at the youth level twice before, it was no secret that the Ottawa-born defender would called back into national team duty again: the AFC U-23 Asian Cup Qualifiers were originally set for this March, but the COVID-19 pandemic delayed the competition. In its stead, the Lebanon U-23 side had two friendlies against Bahrain, where Mikhael further solidified his role in the youth national team setup.

While his latest call-up comes as no surprise, his first-ever certainly was: it was the result of a word-of-mouth referral that got the ball rolling without his knowledge. His trainer in Ottawa, Antonios Assad, happened to have also worked with new Lebanon U-23 head coach Jamal Al Haj’s son, and sent the coach a message about a certain six-foot tall centre-back who had some good video footage at Carleton University. Mikhael got his first call from Al Haj last November.

It feels like so much has happened since then, but when I look back it’s only been less than a year. It’s really just crazy.

His first stint with the U-23 side saw him participate in three friendlies against Lebanese Premier League opposition, with Mikhael even being asked to take a penalty against one of them. It’s not something he was expecting, but scoring that goal is now a memory he’ll carry with him forever.

The relief I had after scoring was just amazing. I didn’t even know what to do after. It was a really nice moment for me, and I’ll never forget that one. But it was a friendly, right? So, hopefully I can get my first official one soon.

Having impressed in his first-ever national team camp, he was called up for the Lebanon youth team in March, with the U-23 squad traveling to Beirut for a training camp and then to Bahrain to friendly competition, facing the host country two times. It was a level higher than the Lebanese Premier League competition he’d faced earlier.

It was definitely more tough because of the traveling, and you’re less familiar with the environment. Coming up against those guys, the level was higher, there was more pressure and intensity. It was a bigger test and they were harder matches, but they were also really good: I got some heavy minutes, and I can’t complain. They were good for building chemistry and us getting to know eachother as teammates.

Mikhael’s first experiences against other national competitors allowed him a more in-depth look at the differences between the types of players one faces abroad, and the types he’s accustomed to playing at home. As a result of the different playing styles, the system deployed on the pitch under Al Haj is different than what he’s experienced under Carleton’s Kewsi Loney or outbound Valour coach Rob Gale. Mikhael says it was easy to adjust, however, and he’s a fan of both styles of play.

Coaches have their principals, and most good coaches have similar ones. All three of mine have amazing principals and systems that they like. I found that Rob and Kwesi did have similar systems to the one in Lebanon, but the change wasn’t anything crazy. It’s more things to fit the personnel, if you know what I mean.

When Mikhael departs for his second stint with the Lebanon U-23 side ahead of October 23, he’ll be flying to Tajikistan to jump right into do-or-die cup action. Lebanon finds itself in a group with group host nation Tajikistan, Iran, and Nepal. It’s a group that could go either way, and Mikhael believes that Lebanon can do well: he doesn’t look at the world rankings, but simply aims to stay positive and do the country proud.

Should Lebanon top their group or finish as one of the best four runners-up in the 42-country tournament, the country will earn a berth in the 2022 AFC U-23 Asian Cup set to take place next June in Uzbekistan. The qualifiers set for late October will mark Mikhael’s first true competitive fixtures with the youth national team.

While he’s happy to get heavy minutes at the U-23 level, the obvious that of ‘what’s next’ leads to the possibility of a senior debut. When asked about it, Mikhael remains humble: he’s focused in the here-and-now, but he does admit the thought of a senior debut crops up into his mind.

I do think about it in the back of my head. It’s not my main focus. My main focus is where I’m at right now: performing for the U-23s and Valour. I try to stay in the present, but I know deep down that with some good performance, consistency, and hard work, that this is a possibility and it would also be amazing. I do think about it, but I’m just more focused on getting the work done now. Then hopefully it will come later on.

The 21-year-old is eligible for Lebanon through both of his parents, who have watched him grow and play all the way from youth clubs to provincials and, now, to professional football and the international level. He describes it as a beautiful feeling for the two of them: “that’s where they come from,” he says proudly, “It’s pure joy and honour, and it’s surreal.”

Surreal is a good way to describe his past year: even beyond earning the chance to represent his country at the youth level, his selection by Valour FC in the 2021 CPL-U SPORTS Draft was the start of something big. The club signed him to a full contract, and he left home for the first time to tackle his first professional experience with all he had.

Being in the locker room with all these guys who played year sand years of professional football, learning from them and talking to them, they’ve given me lots of advice. Getting to debut, the highs and lows of the season, the last 5-6 months have been a lot of gained experience and life lessons.

The defender has made twelve appearances for Valour FC across all competitions, making his debut on Canada Day against the Halifax Wanderers. He’s racked up 579 minutes of action on the pitch since, and has enjoyed a few full ninety-minute outings under Rob Gale. He’s still awaiting his first minutes under Dos Santos, but it seems like those won’t be too far away.

I feel like Valour is an amazing team, and I feel really blessed that Rob, Damian, and this club drafted me. They brought me to the end of the season, it wasn’t just that first three months and back at U SPORTS. They really believed in me enough to keep me on for the whole season. I didn’t have expectations coming into this, so for me to get the minutes that I have and gain all of this experience, it’s been amazing and I’m very grateful for it.

Where he is now is something he would have struggled to imagine a year ago, when the Carleton Ravens defender underwent surgery to fix a fracture in his foot that left him unable to walk for months. The rehabilitative process wasn’t an easy road, with this October now representing the fruits of what has been a tremendous year of labour: professional football at the club level, and big opportunities with the Lebanon U-23 side.

For me to be here now, about a year and a half later, it’s crazy. You never know what can happen in a year. Life is crazy. In 2022, September or October, who knows, man? Only God Knows.

With Mikhael having been offered a full contract this season, the fourth-year Carleton University student took a small reprieve from his post-secondary economics studies. He’s set to finish the last of his courses during the winter semester, during months where he’s not in the midst of two international youth call-ups and a play-off push. It’s an understandable decision.

As for what comes next, Mikhael says he would love to return to the Canadian Premier League, where he appears a good fit with Valour. He’ll see what happens at the end of the season following discussions with his family and coaches, where they’ll make some big decisions.

It’s been a whirlwind year during Mikhael’s 21st spin around the sun, and one suspects the next few rotations will witness a lot more to come.