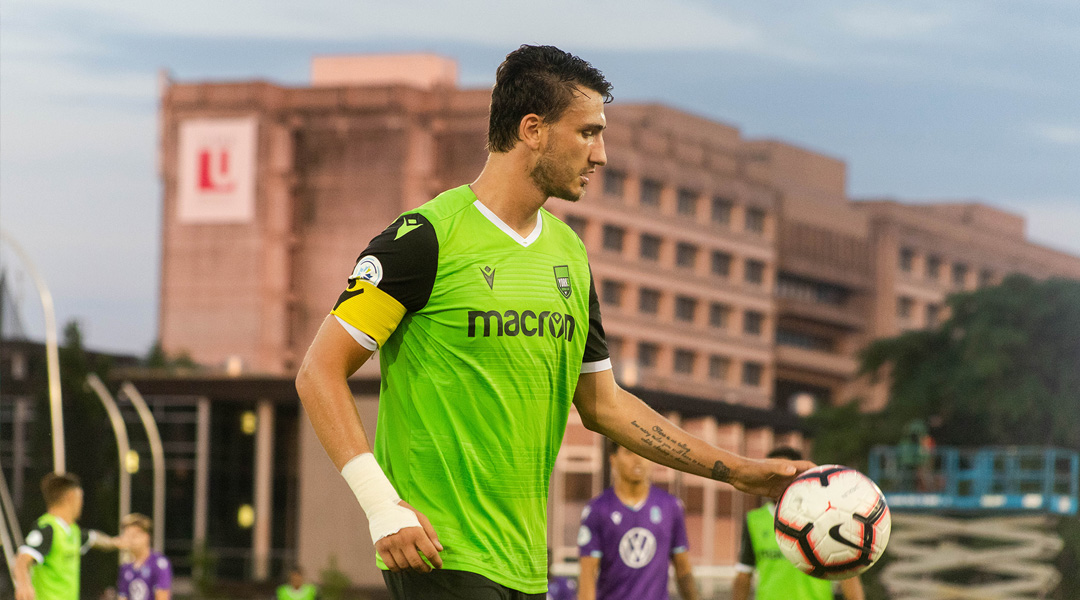 York9 FC appearance leader Luca Gasparotto has announced his decision to step away from professional football in order to pursue another career path.

The 25-year-old Canadian centreback went public with his decision today, departing from the Nine Stripes with 41 appearances, two goals, and one assist under his belt. He departs the only player in CPL history to have played for every single possible minute for their side for two seasons running.

After a career that saw him make over 150 professional appearances, the defender penned a letter reflecting on his career which fans can view here. The Nine Stripes also released a video honouring the Canadian defender:

Gasparotto tells Northern Tribune that the decision was simply a means to secure his financial future for the long term, but made sure to thank the York Region side for giving him the opportunity to play at home at the tail end of a career which largely saw him play in Scotland.

The 25-year-old stated that it was a decision he’d been stewing on for a while now. We’d been reporting that Gasparotto’s contract talks with the club had stalled for some time, with the defender opting to change his career path in order to secure his long-term career plans.

It’s no disrespect to the league, I loved playing in this game. I got to play back home for the last two years. It’s hard to make a living off of what the contracts are in the league. At this point in my life, I’m trying to set myself up for the long term, and that’s the difficult decision that I made, to step back from soccer and to pursue a different career.

Gasparotto has already taken he next steps in regards to this, and is now working with an arborist ahead of his completing his apprenticeship certification from Humber River College at the turn of the new year.

The 25-year-old is now a homeowner in Durham with a mortgage to pay, and felt like securing himself long-term full-time work with a stable income was ultimately the best decision for his future. He becomes the second York9 FC player to step away from the professional game this year following the departure of goalkeeper Colm Vance.

That being said, the 25-year-old hasn’t completely left the game of football: he’ll still be coaching at the Durham FC Academy on weekends for the time being.

I’m going to be working with a program out here in Durham that’s an expansion of the Durham FC Academy. It’s a program that’s going to help kids who don’t necessarily get that extra training that they need in small town clubs. It’s going to be small groups of kids with a focus on position-specific training.

While he conceded that coaching is something he might get into down the line, for the moment his main focus is continuing his first steps as an apprentice arborist. Despite the financial difficulties that can be stressed by a salary cap league like the Canadian Premier League – especially given this year’s hefty salary cuts – Gasparotto said he had nothing but great things to say about the fledgling league and stated he was grateful to be a part of it.

It was great these past years, even though we didn’t really get to play in front of anyone this past year, but just the experience of being back home and being able to play in front of friends and family. We’re starting to build the foundation of soccer in Canada, and I’m proud to have been a part of that. I have no doubt that this league is going to continue to grow and produce the next generation of talent, and help kids get their opportunity to play professional.

Come 2021 and beyond, he’ll be following the league and will continue to support local football, he says. Suffice to say, it wouldn’t be surprising to see a certain six-foot-two figure taking in a game at York Lions Stadium once home games become an aspect of normal life again. In his farewell letter to fans, he even jested that he could still do a job coming in from the stands if there was a defensive emergency.

With that, Luca Gasparotto departs from professional football with 153 appearances and six goals to his name. As York9 FC’s vice captain and all-time appearance leader, he leaves big shoes to fill for a Nine Stripes defense that also sees out-of-contract Roger Thompson in talks with other CPL sides at the present.

We wish Luca Gasparotto all the best in his next chapter and beyond.