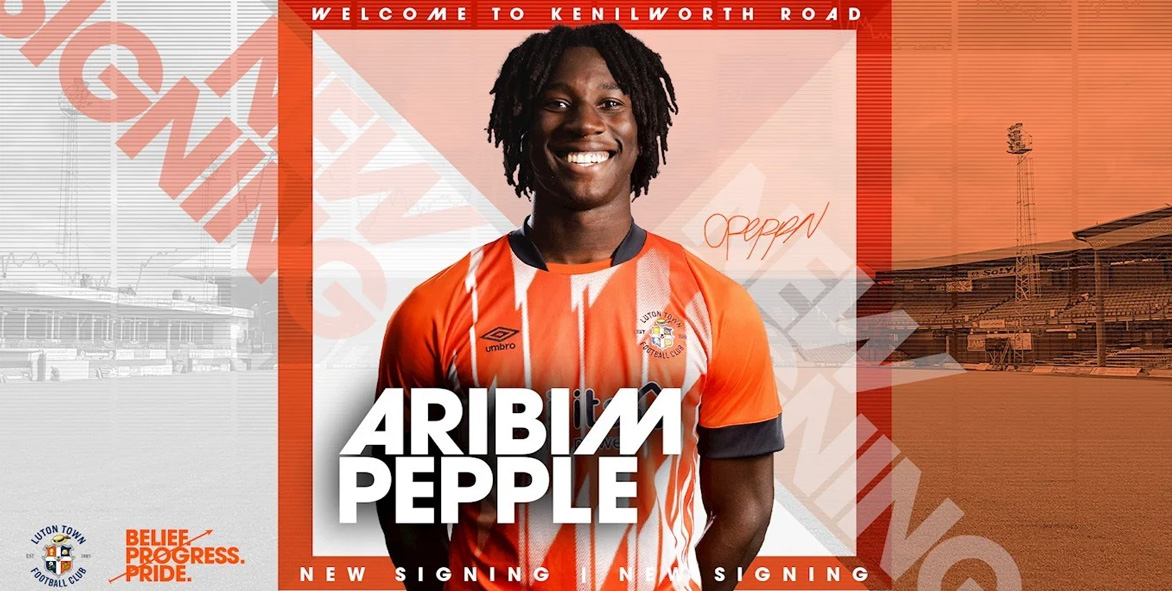 Young Canadian Premier League striker Aribim Pepple has officially joined English Championship side Luton Town FC in a move that has been weeks in the making. The fee behind the transfer was not disclosed.

“We’ve been aware of Bim for a little while,” said Luton Town head coach Nathan Jones. “With the greatest respect, we had to do our primary recruitment first, and there are certain signings that we make that are for the future.”

The 19-year-old Kettering-born striker was in the midst of record-breaking form at the CPL level, with Pepple having scoring six goals in his last five games before the club granted him an ‘overseas leave’ to trial with his English suitors.

Cavalry had confirmed the player’s sale two weeks ago, stating that it was finalizing the paperwork to transfer the club’s record-breaking youngster. By that point, Pepple had been spotted on the bench for Luton’s preseason match against Northampton, suggesting that the hijacking of the Forest Green Rovers‘ transfer target was all but done and dusted.

Pepple had ‘toured’ himself over in England before, having trialed with both Sheffield United and Leicester City back in 2021 before eventually landing with the Getafe U-19 squad in Spain, where he scored on his debut.

Pepple had first inked a deal with his current Canadian Premier League side back when in 2019 when he was just 16 years old youth prospect. He made fifteen appearances for the side before his stint in Spain with Getafe, and then returned this season and absolutely lit the league alight this summer.

The Alberta-based side has had a stellar season for sending its youngster upwards, with Pepple’s move coming just one month after the club sold youngster Victor Loturi to Scottish top flight side Ross County FC. They’ve also worked hard to bring in some replacements, with Spanish full-back Roberto Alarcon and Haiti international Mikael Cantave arriving to Spruce Meadows.

“We’d like to congratulate Aribim on his move to the English Championship with Luton Town FC,” said Cavalry FC manager Tommy Wheeldon Jr. “He is a great example of why our domestic league was created and has grasped his opportunity with both hands. I firmly believe that his character and capability give him the foundations of a big career ahead and we will watch proudly knowing we played a small part in helping the journey of a local kid develop”.

While Aribim’s transfer to the English second tier shows that Cavalry has certainly done a great job developing the youngster, his new team also eyes him as one for the future, too.

“We are looking at developing players and keeping them moving forward within the club,” added the Luton gaffer. “Of course, we want to bring them through the academy. If that type isn’t in the academy, then we have to go and get them really early and work with them. That’s what this is. It’s a great opportunity for Bim, but he’s also a real good blank canvas to develop into our next Elijah, our next Cameron Jerome, our next Carlton Morris.”

“I’m still 19 so I’m still learning and growing so by no means do I know everything or is my mentality complete,” Pepple had recently told Okotoks Today, “from when I was 16 to now there’s already been a difference so as long as I keep my head down and listen to my coaches, listen to my family and keep learning then it’s only going to go up from here.”

Pepple told his new club that it felt good to finally get the transfer completed, noting that the club has a clear ambition to get promoted into the Premier League – a feat just completed by Canadian international Richie Laryea last season.

Pepple contributed six goals from 22 appearances for Cavalry FC, departing on record-breaking form and looking ready to springboard himself to the next level.