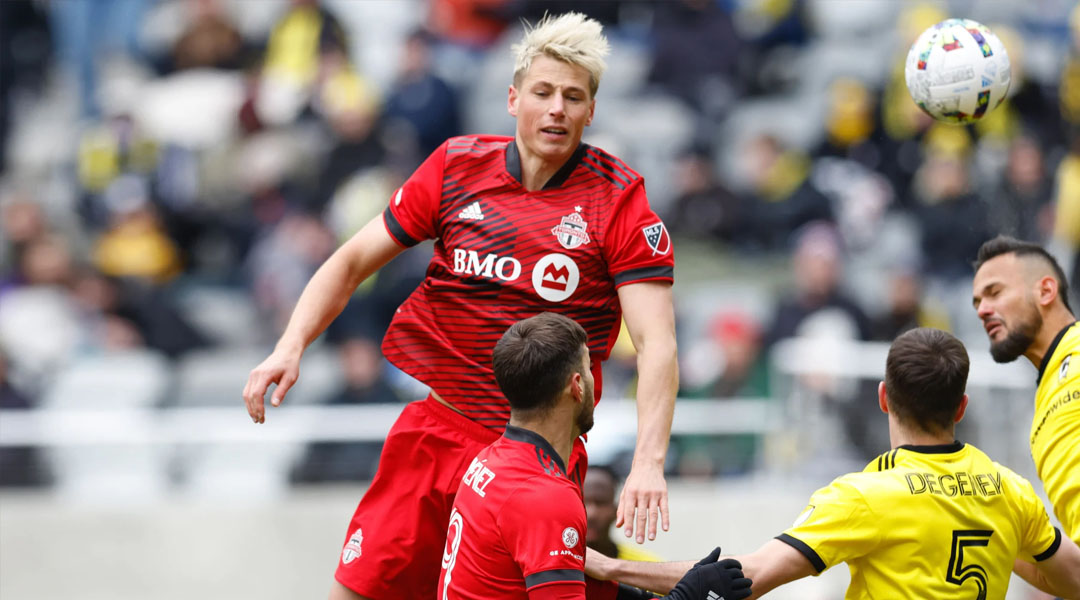 Despite dropping the match after holding a 1-0 lead in the first half, head coach Bob Bradley – among many others – was impressed by how the former Pacific FC duo held their own after stepping into a back three alongside Michael Bradley. Kadin swapped flanks to play on the left, with MacNaughton filling in as a right-sided centre-back.

See Also: Here’s How MacNaughton And Chung Look In FIFA 22

“Both did a good job,” reflected the head coach, “That is not Kadin’s main spot, but he’s been there in training and I thought he responded really well. The understanding between Kadin, Michael, and Lucas was good. They handled situations in a good way, we were able to play from the back when we needed to. Both stepped on the field in their first starts and did well.”

Both athletes made their Toronto FC debuts in the second half of last week’s home opener against the New York Red Bulls, with this weekend’s start reflective of plenty of faith shown by TFC brass in the pair of defenders.

While MacNaughton was given plenty of individual praise, the 27-year-old defender is keen to bring better results for TFC, who – like both the Vancouver Whitecaps and CF Montreal – remain winless after its opening three matches.

“We’re obviously disappointed. If you go into halftime up 1-0 you expect to win the game, especially when you’re playing well and you’re creating chances,” he explained. “and we had a chance, one or two at least, to go 2-0 up and I think at that point, if we do that makes the game quite easy, so we’re disappointed.”

The centre-back recalled that there were moments in the match that were great, but noted that there were periods both as a team and individually that need to be improved upon. The New York-born Belgian-Canadian was playing League1 Ontario football just four years ago, arriving to Pacific FC as a first-year-pro in 2019.

The next three seasons saw him feature in 59 matches for Pacific across all completions, contributing five goals and one assist during his time in purple. Similarly, Kadin Chung was signed by Toronto FC after making 63 appearances for a Tridents side which won the Canadian Premier League last season.

Both had played against Toronto FC in the Canadian Championship last season, dropping a 2-1 result away in BMO Field.

While MacNaughton was signed directly from Pacific not long after helping the CPL club to a North Star Shield, Chung spent several weeks on trial before being added to the squad following the outbound loan move of Auro Jr to Santos FC.

Bob Bradley is showing plenty of faith in several young Canadians, including the likes of Luca Petrasso and newly-converted full-backs Jahkeele Marshall-Ruty and Jacob Shaffelburg. While MacNaughton and Chung made a splash last weekend, there’s a lot more to come from the duo – and, says Lukas, Toronto FC itself.

There have been three CPL-to-MLS transfers to date, with Joel Waterman having been the first in 2020. Former Forge full-back Kwame Awuah trialed with the Whitecaps this season before signing with Saint Louis City 2, whilst it is expected that former Cavalry man Mohamed Farsi will also land in MLS NEXT Pro with Crew 2.

Should MacNaughton and Chung continue to slot in well at the Major League Soccer level, there’ll be more eyes watching the burgeoning domestic professional league that they came from. The Canadian Premier League will begin its fourth season on April 7.