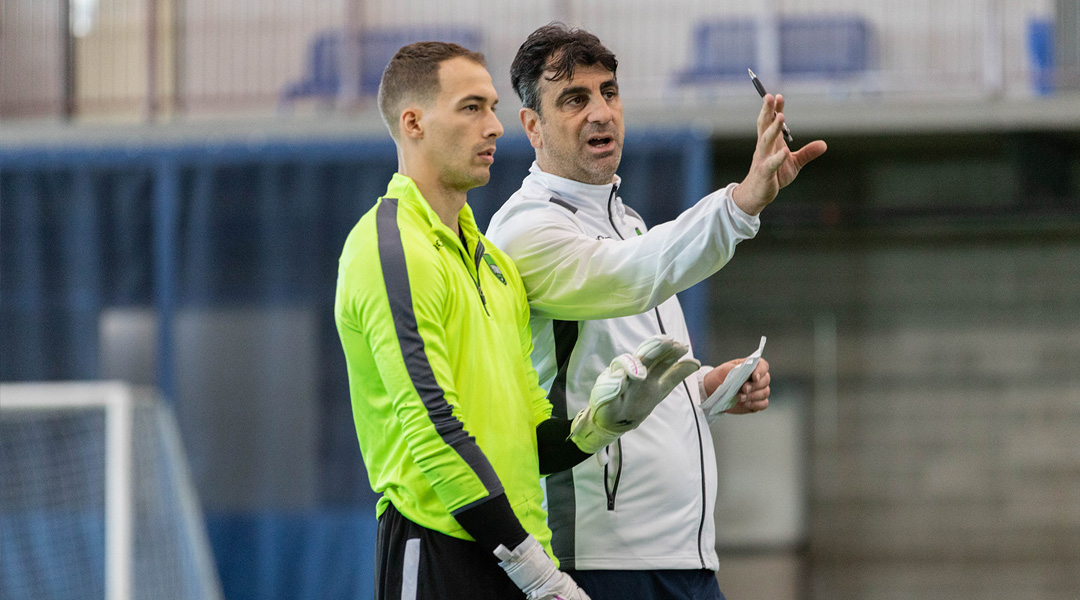 Silva on Y9 Season: ‘Not Time to Hit The Panic Button’

If anyone has a case to be frustrated with the start of the season, it just might be Matt Silva. The 28-year-old Canadian goalkeeper left an overseas career in Sweden to join Canadian Premier League outfit York9 FC, but found his starting spot taken away with the late preseason arrival of Nathan Ingham, who came to the York Region club after a trial with Forge FC.

The latter has started every game for the Nine Stripes, and his impressive performances have left him with a league-high 23 saves. Despite his heroics, York9 FC sits last in Canadian Premier League standings after the opening month saw the club garner three points from four away games and suffer a home loss in the 905 derby.

Silva isn’t worried. According to him, the locker room is full of players who believe that the club will turn things around. Speaking with Michael Miller for Premier Podcast, he reiterated that York9 FC is nowhere close to hitting the panic button yet:

“I say with a different group of players, I could imagine the atmosphere around the changing room would be panic, it would worrisome. But we have a good group of players. We have a great staff that have us prepared. We all know where we are. We’re okay, we’re calm, and we know that it doesn’t happen overnight. It’s definitely not time to hit the panic button.”

When Silva first took a call from York9 Goalkeeper Coach Camilo Benzi and decided to return home, he had just wrapped up a season with Österlens FF in the Swedish second division. He had a trial lined up with Trelleborgs FF, who had just been relegated from the Allsvenskan. The prospect of coming home was a daunting decision, and he didn’t make it immediately – but he’s confident that he made the right choice.

He expects the power dynamics of the league to shift in the near future – especially with the summer months giving way to a healthy number of home games. It’s something that Jim Brennan is also looking forward to.

“Like I’ve said, we’ve drawn a couple games we should have won, and there’s also a couple of games we snuck by and snuck in a point. We’ve been on the road for quite a bit. Even though we unfortunately dropped the home opener, it doesn’t mean that wins aren’t in our future. We’re playing well, we’re getting opportunities, and those will continue to come.”

Beyond that, the Brampton-based goalkeeper has no hard feelings regarding losing the starting spot. He recognizes that Ingham has elevated the standards of what fans can expect to see in the league, and Silva says he’ll be ready to fill in when the time comes.

“First and foremost, Nate definitely has been doing extremely well. That’s what inspires me and continues to keep pushing me to train well, and train hard. It would be a disservice to my team and myself to not train hard, to not be prepared, to not be ready when I get the nod. There’s no reason that if something were to happen or if I were to get my chance, that the level should drop. That goes across across the field for all 11 and the entire 23 man roster.”

Silva’s perspective is one echoed by assistant coach Carmine Isacco, who revealed that fans should expect to see heavy rotation from the Nine Stripes. He stated that any player on the club’s 23-man roster must be ready to jump in at a moment’s notice. Last week, those words rang true with both Morey Doner and Michael Cox making their professional debuts. The former is the first-ever professional soccer player to come out of Collingwood, Ontario.

Out of the club’s 23-man roster, only three other players aside of Silva have yet to make an appearance for the Nine Stripes: Colm Vance, Roger Thompson, and Jose Pina. While Vance has made the bench and Thompson has been on the training ground, the club has remained radio silent on the delayed arrival of Jose Pina. It’s possible visa issues have delayed the Venezuelan midfielder’s start in Canada.

While Ingham has occupied every single minute of potential game time between the sticks for York9, there will come a time when Silva will get his chance. With the Nine Stripes being the only team to have three goalkeepers on its roster, Silva knows he’ll need to be on the top of his game when the time comes. It looks like he’ll be ready.