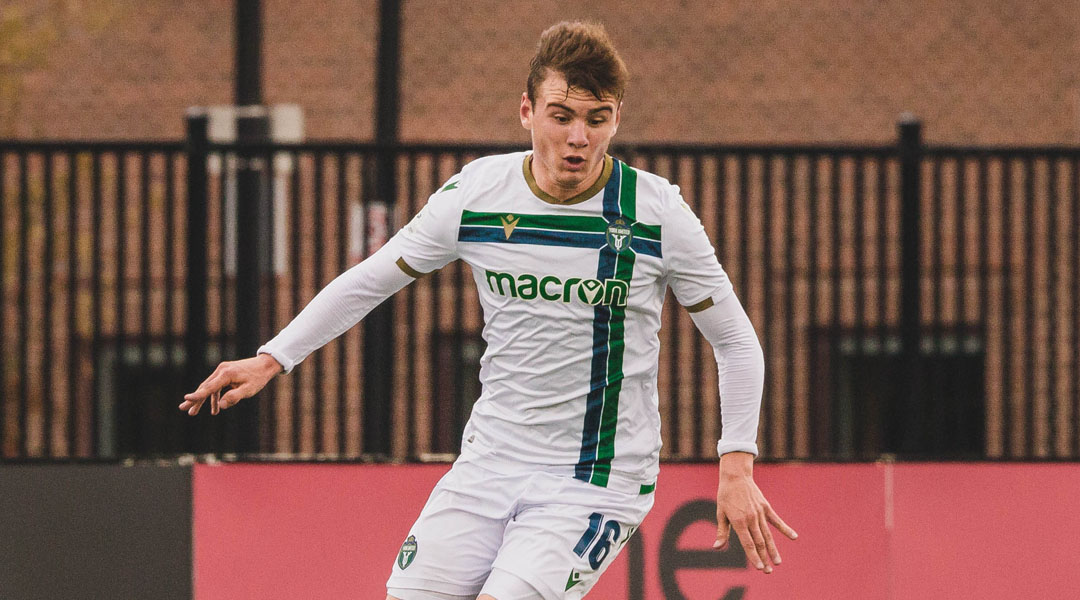 After Northern Futbol’s Thomas Nef stated that 21-year-old Nine Stripes midfielder Max Ferrari had gained interest from multiple clubs in the Netherlands, Northern Tribune reached out to the club for a clarification.

As it turns out, the Canadian Premier League side has had conversations with clubs from multiple countries, though by chance the Netherlands was not one of them.

“We’ve had discussions with people from Europe, North and South America, and Oceania on him,” revealed McNab, “he’s had a great year and as a result has popped up on many people’s radars.”

Ferrari was well-utilized by Jim Brennan throughout the 2021 season, appearing in just about every position for the side throughout a campaign that saw him make thirty appearances across all competitions – the most of any Nine Stripes this year.

Having wrapped up an excellent individual season that also saw him bag his first three professional goals, it’s quickly looking like the club did well to extend his contract through to 2024 prior to the end of the campaign.

The 2021 Canadian Premier League season also saw Max Ferrari earn a Best U-21 Canadian Player Of The Year nomination for the 2021 CPL Awards, which are set to take place next Tuesday.

“I think this would be a good move,” Nef had said on the Northern Futbol podcast, “he has been one of the shining players who has the talent to move abroad.”

In that, McNab offers agreement, while downplaying the expectations of a quick move: “there is a long way to go before any deal, but he’s put himself in the conversation with hard work and his performance last year.”

The former League1 Ontario athlete has developed well at the CPL level, having first arrived to York United as a relatively unknown Aurora FC product. He appeared in all seven matches at last year’s Island Games tournament before cementing a starting role for himself this season. He’ll be expected to be a mainstay in the lineup next year if he doesn’t move abroad.

His second CPL season saw him create the fourth-most chances of any player in the league along with the fourth-most one-on-ones, while his defensive duties saw him block a league-leading eleven shots in the box.

Sportsnet’s Peter Galindo hailed him as a top chance creator in the CPL, stating that he deserves the attention: “Whether he can find the right situation and eventually thrive in Europe, we’ll see, but he definitely deserves the opportunity.”

York United’s last outbound transfer saw the club sell fast-footed midfielder Emilio Estevez to ADO Den Haag last May, through the Taiwan international never made an apperaance for the Dutch club’s senior side before landing in the Spanish fourth tier. To keep fit for international duty, he trained with the Nine Stripes earlier this year.

While the previous offseason saw the club utilize multiple outbound loans to keep some of its talent sharp in the off-months, it remains to be seen if such a strategy will be deployed going into 2022. McNab states that his squad underwent a much higher workload this season compared to the shortened Island Games tournament, with a more traditional preseason potentially preceding the next campaign.

“I’m always open to working with clubs,” he said, “but it’s certainly harder than ever before.”

While York United remains without a head coach following the departure of Jim Brennan last month, McNab states that roster decisions on extensions and new deals can be made ahead of the new hire if needed.

While it remains to be seen what happens with Ferrari, the fact that he’s drawn widespread interest from both North America and abroad is certainly food for thought.