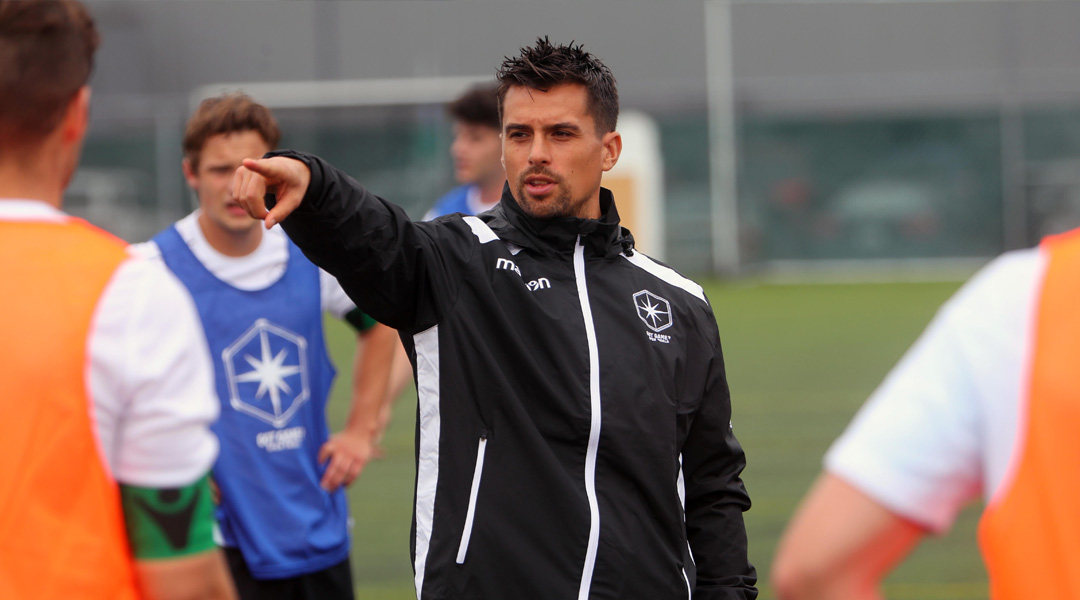 Speaking with OneSoccer reporter Tyler Bennett ahead of Pacific FC’s final game of the season against Valour, interim head coach James Merriman touched on the subject that all Pacific FC fans are wondering right now: what led to the sacking of Michael Silberbauer?

The Nanaimo-born interim coach didn’t offer specifics, but rather than shifting blame onto the outbound Danish coach, Merriman said the onus of responsibility was on the entire club, including both players and staff members.

Pacific FC CEO Rob Friend had previously explained that Silberbauer’s firing wasn’t a reactive decision, indicating that it was one that club executives had been considering for some time. With Pacific FC currently in sixth place in a seven team league, it’s fair to say there’s certainly room for improvement.


To that end, Friend recently stated that the squad had become too complacent as the fall season wore on, and even admitted that up to half of the current roster may find themselves replaced ahead of the 2020 season as a result. This complacency, as it turns out, was one of the killing blows to Silberbauer’s reign at the club:

The inaugural Canadian Premier League season got off to a rough start for Pacific FC, with marquee signing Marcel de Jong rupturing his Achilles tendon before the league had even kicked its first ball. The veteran left-back only recently returned to action, but his on-the-field leadership was certainly missed by the young squad throughout the year.

Despite the harsh reality check from Friend, the 38-year-old former Canadian international only had good things to say about Silberbauer: he recognized that it’s not easy coming into into a new league, a new club, and a new culture:

It’s been an unlucky season, I understand that, and Michael’s done a phenomenal job. Absolutely nothing against him: he’s come, and he’s left Denmark, and he’s come into this new culture and it’s not easy. It’s been challenging, so I can only commend what he’s done. It’s a tough decision, because he’s a great person, and he’s a great coach. We don’t want to make these decisions, but that’s the name of the game.

The news of Silberbauer’s firing sent ripples through the Canadian Premier League community, with many fans being surprised to see the firing come a day before the final game of the season. Friend explained that the rational behind the move was to send a message to the players, while simultaneously testing their resolve to see how they react in the final game.

With Merriman as the interim gaffer, Pacific FC will hope to end the season on a high note at home against Valour FC. Only Rob Gale’s men have leaked more goals than Pacific FC, conceding 35 goals in 17 matches throughout he fall season. If James Merriman can help Pacific FC to three points, the club could usurp Valour’s fourth-place spot in the league table.


Friend made sure to emphasize that the club did not want to instill a ‘revolving door’ mentality when it comes to head coaches, stating that the club will undergo a patient search to find a gaffer who will mesh well with the club’s philosophy of playing young domestic players.

The Pacific CEO wasn’t ready to say any potential names so far, suggesting that the search for Silberbauer’s replacement is in early days yet. With PFC becoming the first Canadian Premier League side to dismiss its head coach, whoever takes the reigns on a permanent basis knows that they’ll need to deliver consistent results.

Unfortunately, the coach is always the first one to get the axe, and it’s not always his fault. It falls on all of us as club. I own it, and we have to make these hard decisions. It’s certainly not easy.

With the offseason poised to bring Pacific FC plenty of change, it’ll be interesting to see how much of the club’s inaugural roster remains for the second season. Contract lengths for Canadian Premier league players aren’t revealed by the league, with many of the Pacific FC players likely on one-year deals. At the present time, no club has announced any contract renewals – though one would expect that the likes of Terran Campbell, Noah Verhoeven, and Ben Fisk will certainly get offers.

Merriman won’t ultimately have enough of a chance to really show if he can impact results this season, so it’ll be interesting to see who fills the head coach role ahead of the 2020 season. A professional club with a focus on youth would sound like the perfect spot for the likes of Nick Dasovic, though convincing him to part from the Vancouver Whitecaps U-23s would be a tough sell.

For now, it’s all just speculation: with a long five-month offseason, Pacific FC has bought itself time to find the right fit. Now the onus has shifted on Rob Friend and the ownership group to do it.