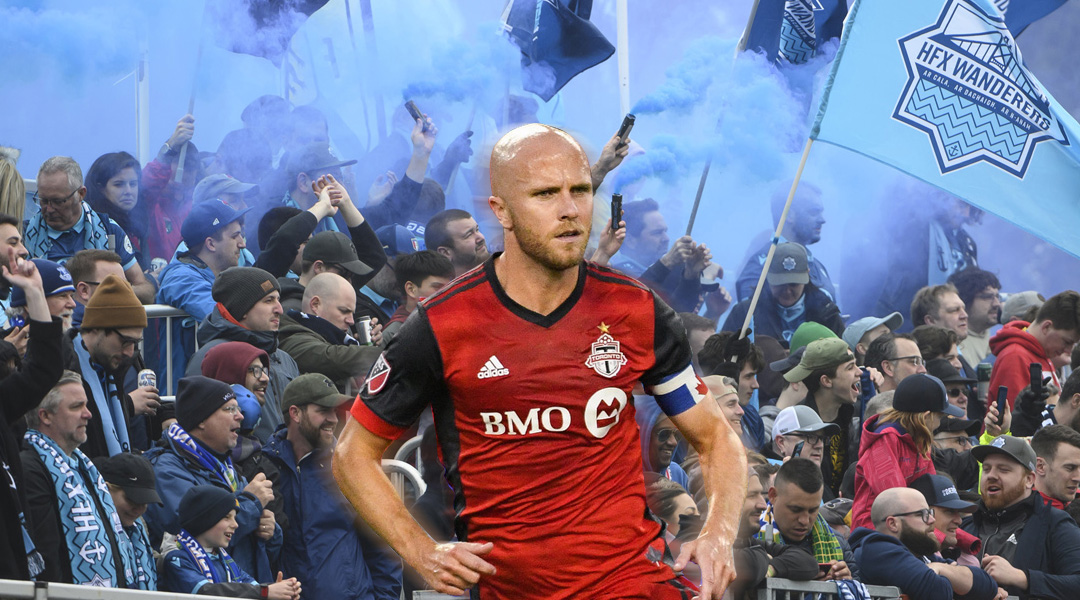 Ahead of the first leg of the Canadian Championship that took place on Wednesday, Toronto FC Team Captain Michael Bradley admitted that he and a few other members of the Toronto FC squad had hoped to square up against Canadian Premier League opposition.

Bradley, 32, is in the final stages of his contract with Toronto FC. It’s not known if the club will splash the cash to retain its most decorated captain, but it’s fair to say that the man who goes by ‘Captain America’ and ‘General Bradley’ has seen it all: he’s won three Canadian Championships, one MLS Cup, and a Supporters Shield with the Reds, with many of his opponents becoming quite familiar over the years.


So, perhaps it shouldn’t be surprising when Bradley revealed that he was pulling for the Halifax Wanderers to win over the Ottawa Fury, so that TFC would have an opportunity to play in one of Canada’s smaller, more unique stadiums.

As per Armen Bedakian of the CPL, here’s what the team captain said on the potential cup matchup:

We have a tonne of respect for Ottawa, but I know that when Ottawa were playing Halifax, there were a few of us who were hoping to see Halifax go through. To have a new experience and go there and play in a tight little stadium like that? That’s what these cups are all about.

Wanderers Grounds fits just over 6,000 spectators, and the newly-founded Canadian Premier League club has managed to fill this up on a consistent basis. The result has been a wonderful atmosphere filled with noise, flowing beer taps, and an all-around great vibe that has evidently caught the attention of Michael Bradley and his teammates.

The stadium is located in downtown Halifax, meaning match day becomes a city-wide occasion: supporters fill up the pubs in the city, group together, and march to the match in numbers. If one happens to be downtown, it’s impossible to miss a matchday.


While this year’s Canadian Championship final ended up between two regulars in Toronto FC and Montreal, 2019 marked the largest edition of the tournament yet: the Voyageurs Cup has more than doubled in size, jumping from six to thirteen, thanks to the inclusion of Canadian Premier League clubs.

It’s so important for the competition itself, but also for football in Canada, that it’s a bigger tournament, that it’s a more open tournament, and that you have games in places like Calgary, Halifax, or Vancouver Island. The magic of any cup competition is the opportunity for smaller teams to play bigger teams, and know that, on the day, anything can happen.

The potential for upsets was certainly on the cards: York9 FC nearly came away with a 2-1 win over the Montreal Impact before conceding a penalty in the game’s dying minutes, with Joseph Di Chiara striking the crossbar to finish out the game. Cavalry FC brought the only real upset of the tournament, besting the Vancouver Whitecaps at BC Place to head to the semi-finals against Montreal.

Even the competition’s two semi-pro teams, AS Blainville of the PLSQ and Vaughan Azzurri of League1 Ontario, provided some tough competition in their bouts against York9 FC and the Halifax Wanderers in the opening Voyageurs Cup qualification round.


Toronto FC head coach Greg Vanney has kept an eye on the competition, and believes the CPL teams did very well in their first showings. Indeed, many had expected the MLS sides to win by a blowout over CPL competition, but such an event never happened.

Whether Toronto FC captain Michael Bradley gets a chance to represent the reds against Canadian Premier League opposition in the future remains to be seen, but one thing is for sure: more upsets will be on the cards in the future, and the Canadian Championship is all the better for it – though Bradley would have had a better chance of playing CPL opposition if the winners didn’t get a bye all the way to the semi-finals.

The second leg of the Canadian Championship final will take place on Wednesday, September 25, 2019 at 7:30PM. It will be streamed exclusively on OneSoccer, who will offer both English and French commentary for the match.