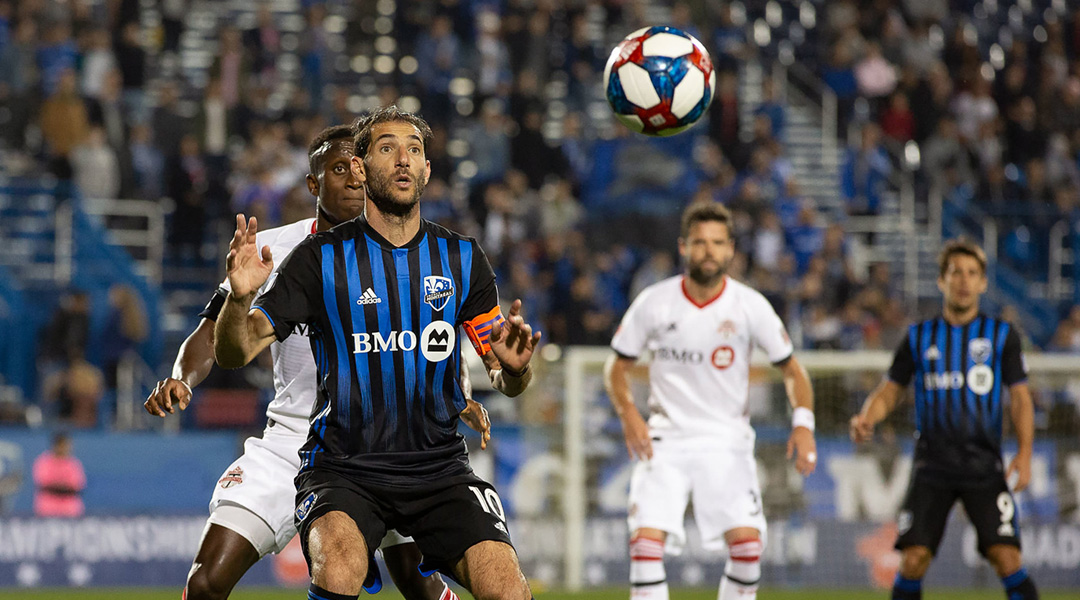 Toronto FC may have won the last three Canadian Championship titles in a row, but it was their fierce rivals Montreal Impact who finished the first leg on top: an absolute rocket from Ignacio Piatti (who else?) separated the two sides after ninety minutes of action, with the Impact set to carry a one goal advantage to BMO Field next week.

Wilmer Cabrera, the newly-appointed Montreal Impact manager who had watched his MLS side fall to three losses and one win before tonight’s first leg title bout, knew how much a victory at Stade Saputo would mean for his squad:

It was really important for us to take this heavy load that we’re carrying off our shoulders after two losses at home. Nobody likes that. We didn’t like it, and we were feeling really bad about it, so today, it was a very good opportunity, in the first leg of the final, to try and go out and shake that off our shoulders.

The winner of the Canadian Championship, besides getting bragging rights over its biggest rival, will also get entry into next year’s CONCACAF Champions League. There’s a lot of prestige and money to be made if one can advance far enough in the tournament.

Toronto FC, as the current holders of the Voyageurs Cup, got a bye to this year’s Voyageurs Cup semi-finals where they safely bested the Ottawa Fury. Montreal almost dropped a shock loss to Canadian Premier League side York9 FC, and then dispatched CPL spring season winners Cavalry FC to reach the finals. Impact midfielder Samuel Piette finished the bouts impressed with the quality of Canada’s domestic league.

Last night Piatti – who has spent most of the season on the sidelines through an injury struggle – was the difference maker. With four goals scored in this year’s cup competition, he’s leading the golden boot race a single goal above now-eliminated Halifax Wanderers players Mohamed Karouma and Tomasz Skublak. His presence has been a boost for a struggling Impact side:

Of course, it’s still all left to play for: with the second leg due to take place at BMO Field next week, Toronto FC will likely be going all-in from the start: don’t expect to see Jozy Altidore and Alejandro Pozuelo on the bench. Fans who want to watch what will certainly be a night of hotly contested football can tune in on OneSoccer, the global streaming service which has exclusive rights to the competition.


When it comes to MLS league action, Montreal currently finds itself on the outside looking in with regards to playoffs. A recent resurgence in form has seen Toronto FC climb to fourth in the east – a stark contract to just one month ago – but Montreal’s margin of error to make the playoffs is much smaller. Hoisting the Canadian Championship ahead of their fierce rivals may be, perhaps, Cabrera’s best chance of shining a bright light on what has been a fairly dim season for fans.

Toronto FC will host Montreal Impact for the second leg final on September 25, 2019 at 7:30PM.

OneSoccer To Stream Canadian Championship Final In Both English And French