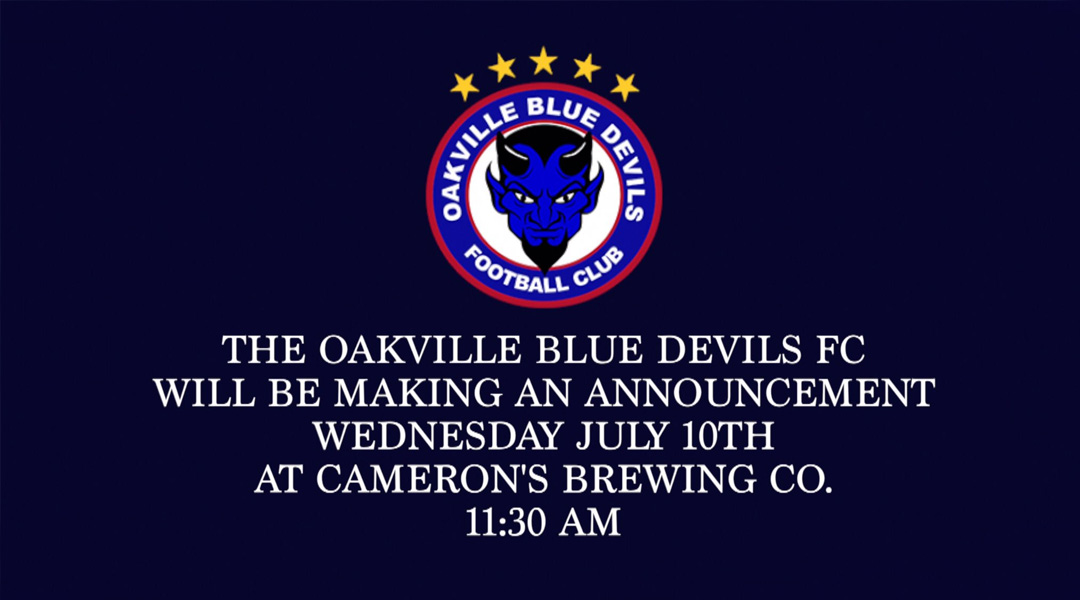 Oakville Blue Devils To Announce ‘Next Chapter’ On July 10

Today, League1 Ontario side Oakville Blue Devils has announced that it will be announcing the ‘next chapter’ of the club on July 10, 2019 at Cameron’s Brewing Company at 11:30AM.

The club joined League1 Ontario in 2015, and won the provincial league in its first year and in 2017. As a result, The Oakville-based club made its first appearance in the Canadian Championship in 2018, where it fell to AS Blainville courtesy of a goal from Diyaeddine Abzi – who now plies his trade with York9 FC.

The Blue Devils have remained quiet on what the next chapter ultimately is, but having brought on former Toronto FC captain Steven Caldwell as club president this February, the League1 Ontario side certainly has large ambitions.

Given that the club already has both male and female squads in League1 Ontario, the fact that it has a ‘next chapter’ to announce is certainly bound to arise curiosity from Canadian Premier League fans – though such an idea should be taken with a grain of salt.

While there’s been plenty of support for a Mississauga-based CPL team, the Oakville Blue Devils haven’t made any noise regarding a potential jump to the professional level so far – though this remains a possibility if it had the appropriate financial support and a worthy stadium to play in, and an ownership group with ambitious goals.

For what it’s worth, CPL commissioner David Clanachan has revealed that there are multiple interested ownership groups in Ontario. There’s been reports of a rumoured Durham bid backed by Steve Apostolopoulos, while it is believed a potential Mississauga expansion will be determined by a stadium feasibility test.

Of course, it’s more likely that the upcoming announcement from the Oakville Blue Devils has nothing to do with the Canadian Premier League at all. There could be an internal restructuring, a total rebranding (which is something familiar to the club, à la Brampton United), or plans for a new stadium venue. With Caldwell having played for TFC and the club plying its trade in the Greater Toronto Area, an affiliation with Toronto FC is also on the cards.

Still, the CPL would be the most exciting ‘next chapter’ for a club in the next-highest level of domestic play within the country – even if this is the less likely outcome.

It’s going to be an interesting week.