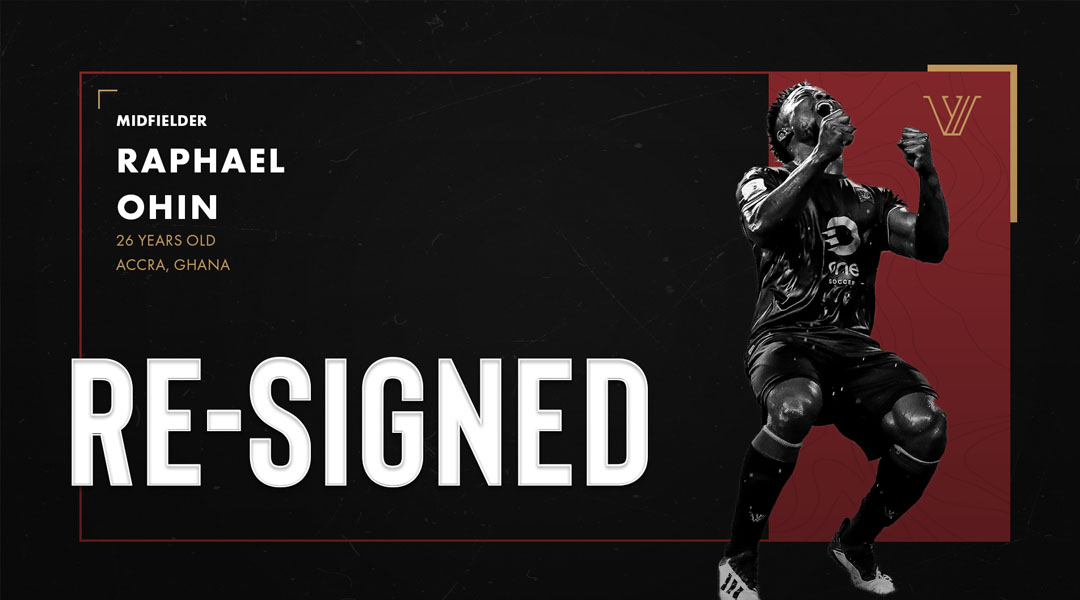 Raphael Ohin is staying in Winnipeg.

The 26-year-old midfielder has been re-signed by Valour FC, with the CPL side now releasing a formal announcement one day after it had mentioned his return for the 2022 season in an club-based interview with Phillip Dos Santos.

He becomes the first of only three possible inaugural squad members to return for a fourth season, with the futures of Federico Pena and Jose Galan still unknown.

Raphael has been here since day one and is a part of this club’s identity. He’s committed to the club, to himself as a pro and how he comes into work and gives his best every day.

The 26-year-old has matured well during his tenure with Valour FC, where he’s proven to be a crucial cog under both Rob Gale and new boss Phillip Dos Santos. He’s made 57 appearances across all competitions for the Winnipeg-based side, 28 of which came last season.

His third season with Valour also saw the midfielder score his first professional goal, with emotional reaction making it clear how much the moment meant to the midfielder:

“This isn’t the time for me to close this chapter,” he stated in today’s Valour FC press release. “This is my city. I love my city, I love the people here, and there would be nothing better than winning a championship with my home club.”

The midfielder aims to help guide Valour to its first-ever top four finish, with Dos Santos saying that it’s not easy to find a player in the market with his high ceiling. The 2021 CPL season proved to be a big one for Ohin, who finished second in the league for recoveries and seventh in successful duels from his defensive midfield role.

Dos Santos believes that Ohin – who has earned the nickname ‘The Rhino’ within the locker room – can build on that momentum for an even better 2022.

He’s a strong player and is someone who I feel hasn’t reached his maximum potential. I’m looking forward to helping him take the next step and I’m really excited to have him back. We know he’ll come into preseason eager to compete for a consistent spot in our midfield.

Ohin first arrived to Winnipeg in 2016 after playing for academy sides in his native Ghana, Switzerland, and Thailand. After settling in Canada, he spent three seasons developing with PDL side WSA Winnipeg (now FC Manitoba) before signing with Valour FC ahead of the club’s inaugural season.

Four seasons on, Valour’s all-time appearance leader is expecting a big year as the local face of the franchise. With new boss Phillip Dos Santos stressing the important of roster continuity, fans can expect to see several other familiar faces returning alongside him, too.

The Canadian Premier League side has also confirmed the return of Andrew Jean-Baptiste, Stefan Cebara, and Diego Gutierrez thus far, with Dos Santos distancing himself from MLS loans for the time being.

The length, terms, and financial details of Ohin’s new contract were not disclosed by Valour FC.