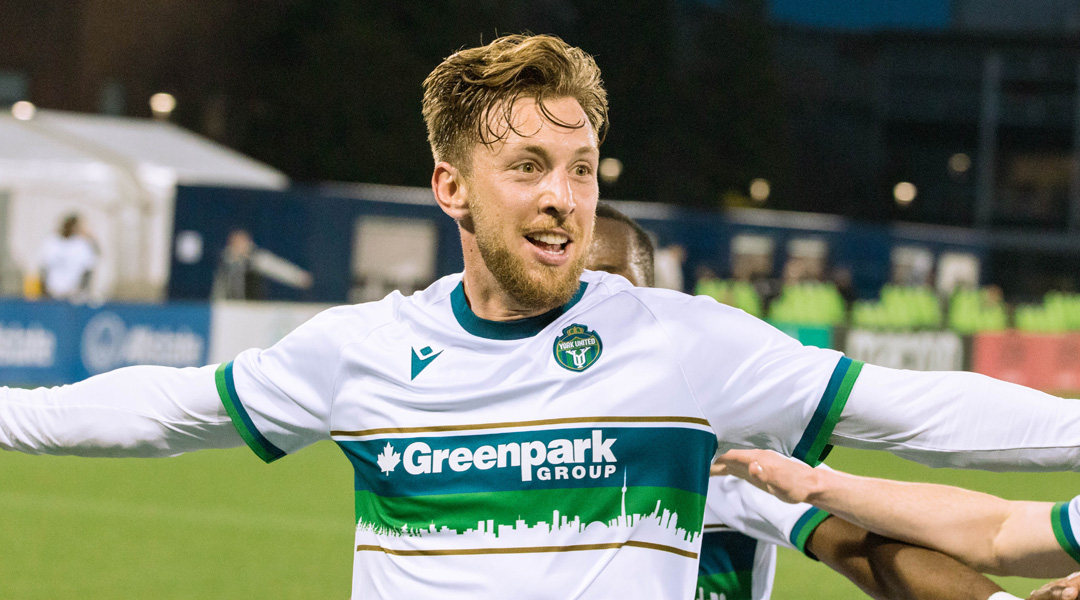 Brazilian midfielder Oliver Minatel has announced his retirement following the end of the 2022 CPL season, effectively calling curtains on a playing career that spanned twelve years.

The 30-year-old forward spent the last season with York United, but was sidelined for most of the season through injury. With the attacking midfielder just just two years removed from a tib-fib fracture that had ended his 2020 season and sidelined him for much of 2021, his plight with injuries have ultimately led to his career ending prematurely.

His time on the pitch now concludes with Minatel being a well-known presence in Canadian soccer circles after having played for both the Ottawa Fury and Cavalry FC prior to his last dance at York United this year, where he scored one goal in six appearances.

Minatel’s career saw him contribute some twenty goals in 130 appearances throughout his time playing in Portugal, Brazil, the United States, and Canada, with highlights including a Europa League appearance in 2011 and helping Cavalry FC to a fall season win in 2019.

Here’s what Minatel wrote in his retirement nnouncement:

Football was my first passion and I am extremely grateful for having lived my childhood dream for 12 years.

Unfortunately, despite the endless efforts to overcome the severe injury I sustained in 2020, I was not able to reach the physical levels required to perform consistently at a high level. Therefore, I have made the decision to retire from professional football at the end of the 2022 season.

Alongside the remarkable memories on inside the pitch, football has given me the chance to meet extraordinary people. I also learned that with hard work, discipline, resilience, and belief that anything is possible.

Special shout to everyone at York United for giving me my shot, I wish the club all the best in the future.

Thank you to everyone that supported me in my football journey, including my family, my friends, my agent Axel Dierolf, my teammates, my former coaches, and my fans – all you guys play a huge role in the growth of football in Canada!

The best is yet to come!

Minatel’s time in Canada began with a hot start in Ottawa back in 2014, when he led the club in scoring after completing seven goals in 22 league appearances. After another season in the nation’s capital, he spent stints in with Puerto Rico FC and South Melbourne before securing a return to Canadian soil through Cavalry FC, becoming the club’s first-ever international signing in 2019.

Minatel accriminated back to life in Canada quickly, bagging eight goals in 29 appearances throughout an inaugural season that saw him help the side reach the CPL Finals. He had featured in every game throughout the following Island Games season until fracturing both his tibia and fibia in a match against York United, with Minatel undergoing rehabilitation in Brazil before re-signing with Cavalry for a third season which was, unfortunately, largely spent on the sidelines due to his prior injury.

York United then took a shot on the midfielder, but further injuries have curtailed what could have been. The Nine Stripes saw several players sustain season-ending injuries this year, with Austin Ricci, William Wallace, and Martin Graiciare all succumbing to year-ending incidents, too.

Prior to his North American chapter, Minatel had developed in his native Brazil before making waves with the PSV Eindhoven U-19 squad and CD Nacional, where he became the youngest player in club history to start an international match after featuring in a UEFA Europa League qualifier as an 18-year-old. He then spent time with Velo Clube before his move to Ottawa.

Minatel’s penultimate appearance came as a late game substitute against his former side Cavalry FC on August 27, where he was tremendously unfortunate to have broken his hand during his three minutes on the pitch. His final appearance came this week in the regular season closer against Atletico Ottawa.

What’s next in Minatel’s career remains to be seen: given that he says the best is yet to come, one imagines that the well-liked attacking midfielder has some plans in place for his post-playing career.

We wish Oliver Minatel all the best in his next chapter.