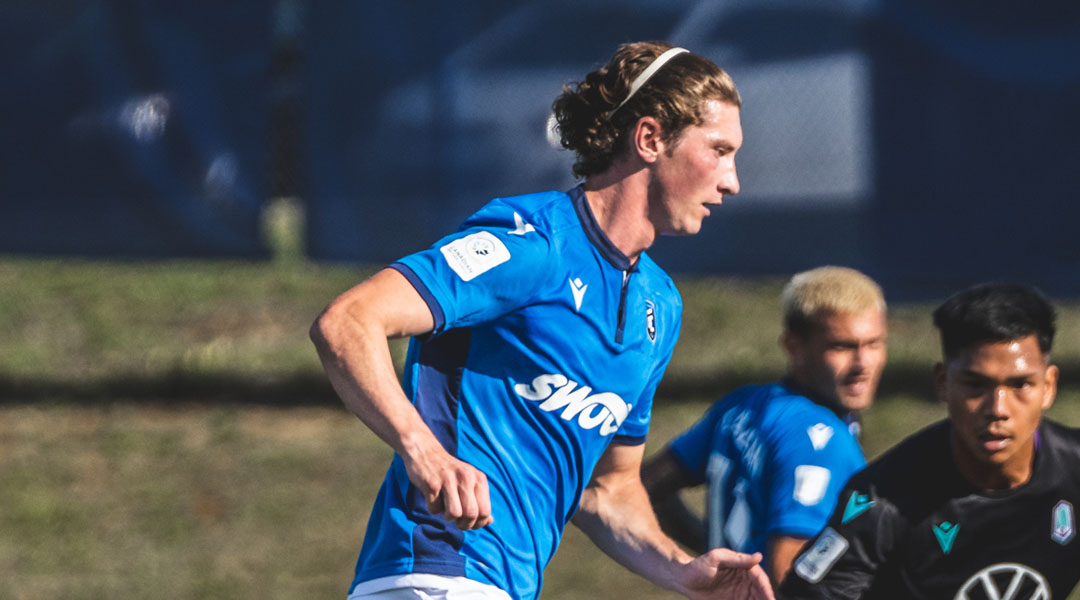 Easton Ongaro is back home, and he’s ready for a third Canadian Premier League season.

The 22-year-old striker has been a consistent highlight for FC Edmonton in its Canadian Premier League era, with the six-foot-six forward having contributed 13 goals in 29 appearances across all competitions. His return wasn’t always a sure thing, with his most recent loan move to Danish second division side Vendsyssel FF having included an option to buy.

He made his debut for the Hjorring-based club in a Danish Cup fixture just three days after the move was announced, eventually making eight appearances in all. After a slow start as he adjusted into being thrown into a new playstyle, he bagged consecutive goals in his final two appearances before his time in Denmark came to an end without an offer to buy from the team. Describing the experience as ‘eye-opening’, he returns from his stint overseas ready to join yet another new system under new Eddies boss Alan Koch:

I think it did transform me a little bit as a player in terms of how to deal with a different style of football. You learn a lot on loan, there’s different methods, so many different kinds of players and athletes. It’s really eye-opening to the world of football. Even though I was just in the second division of Denmark, it also gives you the idea that you’re not that far from the top. You’re playing with guys who have played in the top leagues in Europe and have competed at higher levels, and you start to realize that it’s more than what you thought originally and you really do have an opportunity to go a lot further with it.

Ongaro says his time with Vendsyssel FF benefited him greatly, challenging him as a player to come into a new environment on a natural grass pitch – something he wasn’t accustomed to in the Canadian Premier League – and test his mettle against more seasoned opposition.

Having signed a two-year extension after the conclusion of the inaugural Canadian Premier League season, Ongaro is back in Edmonton after Vendsyssel FF opted not to exercise its option to purchase the 22-year-old striker in favour of a large-scale rebuild. Still, Ongaro had spent a good amount of time thinking about a permanent move to Europe, noting that it’s still on the top of his career aspiration list and where he ultimately wants to end up.

Presently, the young striker has returned to a hometown club in the midst of a large-scale rebuild of its own: after going winless at The Island Games, former head coach Jeff Paulus stepped down after suggesting a new voice in the locker room was needed.

There’s been plenty of change at Clarke Stadium since, with the Eddies bringing in former FC Cincinatti head coach Alan Koch and finally securing itself a new general manager with the arrival of Eric Newendorp from Oklahoma. Together, the duo aim to put in the building blocks for long-term success for fans who endured a tough season in Charlottetown.

With three goals in seven appearances at The Island Games, Ongaro was one of few highlight notes for Eddies fans taking in the bubble tournament. Like a few other returning Eddies who commented on the experience, he states that collectively the group wasn’t good enough.

It’s easy to say the results could have gone our way, but when it’s seven games and none of them go your way you’ve got to start looking at yourselves. Personally, I was happy I was able to score a few goals. I had a couple decent performances, but overall you leave disappointed when you don’t win any games and you leave last place. It’s hard to feel okay with that and feel like you really did something, regardless of an individual’s performance with the team, it’s hard to feel good about it. Like I said, it’s nice to score a few goals, but at the end of the day I was disappointed.

Of course, it’s not all doom-and-gloom now: the FC Edmonton camp is operating at full steam ahead, with the Alberta-based side bringing in one new player signing for every day of the past week. With the return of former Eddies Kyle Porter and Shamit Shome, big defensive re-signings like Ramon Soria and Mele Temguia, international players like Sharly Mabussi and Raul Tito, and some of the highly-touted academy products (among others), it’s been a sharp-looking rebuild so far.

I think it’s really exciting. It seems like every day a new guy is coming in, and we have a different team this year, a new dynamic, and a new mindset. It’s going to be a different FC Edmonton than what people are used to. With all these players coming in and the changes in management, it’s going to be a big year for us. We have a lot to prove and I think everyone realizes that. It’s really just a matter of everyone coming together and clicking as a unit, and I think it can be a really great year for us.

It’s not an unwarranted to suggest the rebuild can result in quick improvements, either: both the Halifax Wanderers and Valour FC showed after the inaugural Canadian Premier League campaign that a significant rebuild can lead to success in the following campaign, with the Wanderers going from the bottom spot in 2019 to a CPL Finals appearance in 2020.

The team was led up top by Trinidad and Tobago international Akeem Garcia, who Ongaro now finds himself tied with in a three-way-tie (along with Tristan Borges) as the top all-time Canadian Premier League goalscorer. Each player has thirteen goals to their name, and while Ongaro recognizes that he’s within touching distance of being the league’s top-ever goalscorer, he’s keeping his goals simple.

Going in to this year, that’s not necessarily on my mind but it’s a goal of mine. Obviously, I need to score goals, that’s my job, that’s why I have a contract here. As long as I do my job and I score goals it’s going to happen regardless. Going into the year, the plan for me is to score goals and be on top of the scoring charts and really lead the team as best I can.

Few would have guessed Ongaro would be on the precipice of this bit of Canadian soccer history a few years ago, and not just because the league itself is relatively new: the 22-year-old comes from a largely non-traditional player pathway, having not gone through academies, the semi-professional system, or provincial rosters.

I attribute that to being a late bloomer. I developed late, I wasn’t always six-foot-six. Physically, I was slow, I was weak. I just didn’t have it at a young age to be a part of those professional academies. Then you go up to the amateur ranks and play men’s soccer at university, and even my first year at university I struggled and wasn’t good. I finally flipped a switch and broke out, and had a good season, and things took off for me from there. I think there’s definitely a lot of players that are like that, because everyone is going to develop at a different stage. It’s not always going to be 14-15. I think it’s a matter of getting exposure, and I think the CPL is the perfect pathway for someone to go from university to the professional game and get that experience.

In that regard, Ongaro also gave thanks to Jeff Paulus for giving him the opportunity to break through at the professional level. While he found himself largely utilized as a late game impact substitute in the 2019 spring season, a hot run of form saw him rack up minutes in the fall, with the striker finishing with 10 goals from 16 appearances. He hasn’t looked back since, opting to put his university education on hold to see where his professional football career can take him.

Last February, his scintillating form in the inaugural Canadian Premier League season saw him named as one of eight Canadian Premier League athletes to be listed in Canada’s preliminary Olympic Qualifying roster. While the striker hasn’t heard from the national team setup since both the camp and the tournament have been nixed due to the COVID-19 pandemic, he isn’t worried: he’s had to wait to prove himself every step of the way so far.

If I do get included in that final squad, it’d be massive for me and a dream come true. It’s one day at a time, and if it’s not now, there’s no reason it can’t be in the future. It’s been like that my whole life. Like I said, I’ve never been a part of academies or anything, it’s just a matter that my opportunity will come and I stay motivated and hungry.

With 15 career goals across 37 professional appearances to his name so far, it looks like Ongaro has a ceiling to match his height. He’ll be an important piece for the 2021 FC Edmonton roster, with Koch having done a good job on paper to work towards his goal of seeing the side ‘catch up’ with its CPL competition ahead of the upcoming season.

While it remains to be seen if home markets will be allowed this year or if it’ll be a bubble tournament once again, Ongaro is confident that he can capitalize on his opportunities in front of the net as they arise. While he hopes to land in Europe to continue his career long-term, right now one of the CPL’s top goalscorers is ready to help push FC Edmonton up the domestic ranks.