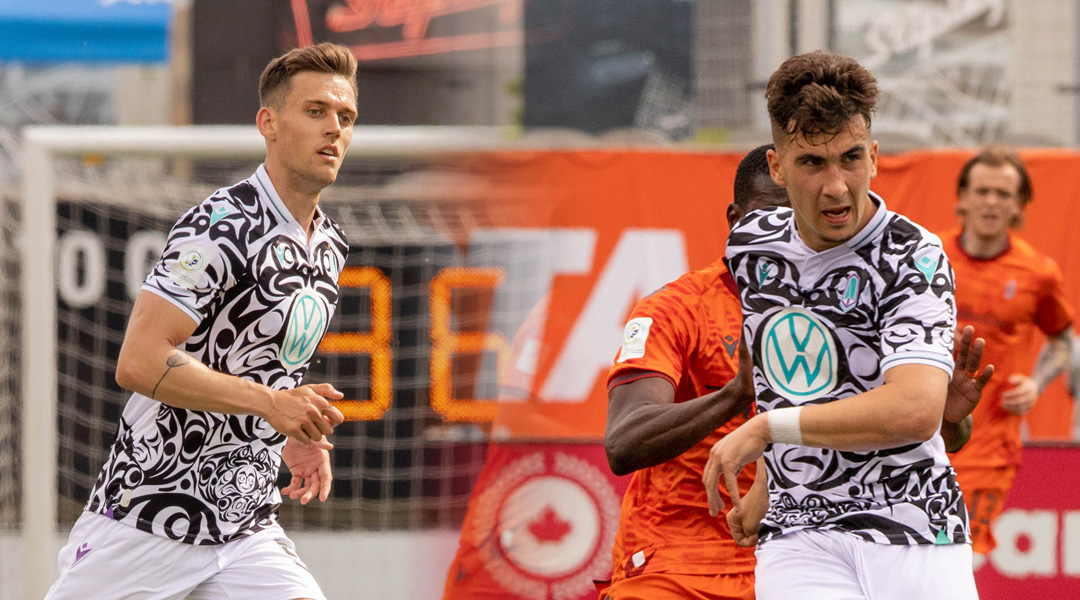 The 2023 CPL season will mark Meilleur-Giguere’s fourth season with the club, while it’ll be former Eddies talisman Amer Didic’s second year out west.

“TMG and Amer formed an excellent partnership towards the end of the season and put in some very strong performances together,” stated head coach James Merriman, who was happy to see the duo back for what will be back for his second year in charge of the club.

Meilleur-Giguere had made 34 appearances for the Tridents this year, scoring a goal in the club’s playoff near-comeback against Atletico Ottawa. Merriman says the Quebecois defender has proven to be an absolute warrior who has developed both as a centre-back and as a leadership figure within the club, where he collected a North Star Shield last year.

Amer Didic had arrived to Pacific FC this year ready to feed off of the club’s championship intensity. While the club’s title defense wasn’t successful, the sizable six-foot-three figure of Amer Didic proved to be a sturdy one on the backlines throughout 33 appearances. He was also dangerous up top on set pieces, contributing two goals throughout his first season in purple.

“Amer grew into the season, adjusting to our way of playing. He is a top defender in this league and incredibly motivated for more next season,” added Merriman.  “We believe in his potential and that his best football is in front of him.”

This season will see Didic re-unite with his former FC Edmonton teammate Easton Ongaro, who arrives to Starlight Stadium as one of the CPL’s most proven goalscorers. With the likes of Josh Heard and Djenairo Daniels returning up top, along with Toussaint in the middle, the start of Pacific’s offseason has looked promising.

Pacific FC did not disclose if their deals include options beyond 2023.