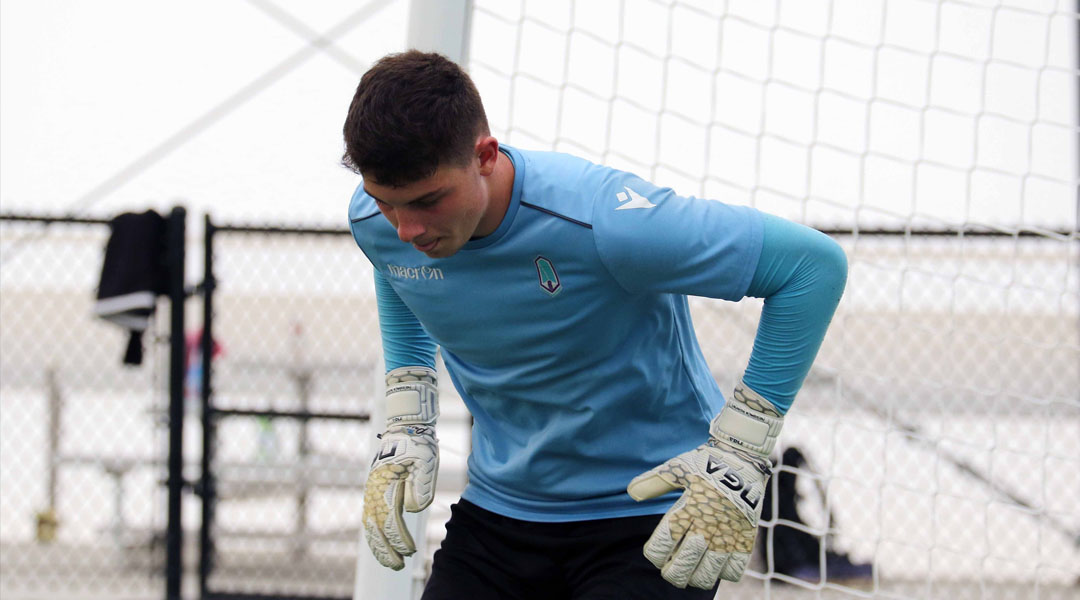 Emil Gazdov is the youngest player currently on the Pacific FC roster, and the club’s newest signing is hoping his first season of professional action will give him a chance to grab opportunity by both gloves.

Gazdov was quick to making a correction in that he stands at six-foot-four as opposed to the previously reported six-foot-three, and he’s excited for the opportunity to train everyday in a professional environment. Now that the 17-year-old is contracted to Pacific FC, he says he’d like to stay there for the foreseeable future if he can prove his worth.


Gazdov says his mother got him an early start in the sporting world, enrolling him in every sport she could, even including Go Karting. Soccer, however, is the one that really stuck with him. His interest, talent, and appropriate stature led him to play with Mountain United FC in the EA Sports BC Soccer Premier League, which is what got the proverbial ball rolling.

Like many players from the youth club, he was then selected to join the Whitecaps Residency Program and made the U-15 age group in 2017, where current Pacific FC goalkeeping coach Mark Village was helping coach at the time. While Pacific FC youngster Alessandro Hojabrpour was in the Residency U-18 group at that point, the duo didn’t actually meet back then – but one imagines they’ll get plenty more familiar in the near future.

Gazdov had traveled with the U-15 Residency side to compete in the Rotterdam Cup, with the squad playing against the likes of Besitkas, Feyenoord, and even a young Irish national side. While the games were short and the Whitecaps found themselves beaten in the tournament, Gazdov said it was a great experience for him overall.

When Village went to FC Cincinnati in 2018 during what turned out to be Gazdov’s last year in the Residency program, the two kept in touch. This year, that communication eventually led to an opportunity for the 17-year-old to train with the Pacific FC squad. It was an ideal situation for Gazdov, who wasn’t training with a professional side after departing from the Whitecaps Residency program. Suddenly, he found himself thrust back into a professional camp featuring Callum Irving and Nolan Wirth, back under the tutelage of Mark Village once again.


The club helped the youngster with housing back in March, having moved to evidently serious discussions with his agent about potentially signing a third goalkeeper. He’s been there ever since, separated from his family throughout the COVID-19 pandemic.

Despite the loneliness that many have felt amid these strenuous times, he’s in good spirits about continuing his training and has been able to keep in touch with his family virtually. He was originally going to switch highschools before the pandemic struck, but then the physical closure of schools meant his alma mater went online and he was able to continue his education without transferring. It’s a small blessing in what has become a tough time for many.

With Pacific FC having resumed training on June 1, the youngster is back to observing Callum Irving and Nolan Wirth, describing the duo as very different goalkeepers. Taking inspiration from both, he says, will help make him a more complete player. He’s also very comfortable with his feet, taking inspiration from Bayern Munich legend Manuel Neuer. While it’s unlikely that Pa-Modou Kah will be deploying a true sweeper keeper in the near future, it doesn’t hurt to have a young keeper who’s confident on the ball, even when outside of the box.

Village has been working hard getting his goalkeepers back to top form, though the goalkeeper coach admits it has been a difficult task without being able to practice one-on-one situations due to social distancing protocols.

With the side having conceded 46 goals across 28 games last season, Pacific FC is now preparing for a 2020 modified season with three goalkeepers and new defensive-minded additions like Jamar Dixon, Thomas Meilleur-Giguere, and Abdou Samake. The fact that Canadian veteran Marcel de Jong isn’t sidelined with injury will be a significant boost for the Pacific FC backline, too.


Still, the west coast Canadian Premier League side only has 17 players on the books, so one imagines that Gazdov may get a few more teammates in the near future. The league is expected to make an announcement this week regarding a modified 2020 season, with Charlottetown’s bid recently becoming a frontrunner. Still, both Langford and Moncton remain possibilities. After the CPL season plays out, Pacific FC will jump into a knockout bout in the Canadian Championship, too.

In the long-term, Gazdov still intends on finishing highschool and pursuing an education. His parents have impressed upon him the value of post-secondary schooling, and he’s committed to balancing both his fledgling professional sporting career and his educational opportunities. It’s a sentiment he shares with York9 FC goalkeeper Nate Ingham, who credits coach Tom Croft for convincing him to get an education simultaneously as well – something he believes gives players important opportunities following their playing careers.

Described as one of Canada’s top goalkeeping talents by Pacific FC CEO Rob Friend, it remains to be seen if Gazdov will have an opportunity to prove himself in the club’s 2020 campaign. The youngster – who also has Bulgarian heritage – hasn’t participated in any national youth camps, so it’ll be interesting to see if Village has indeed made a good move in bringing in a young former Residency player who, without the Canadian Premier League, may have ended up quietly falling through the cracks.

Pacific FC did not reveal the length or financial terms of Gazdov’s contract.