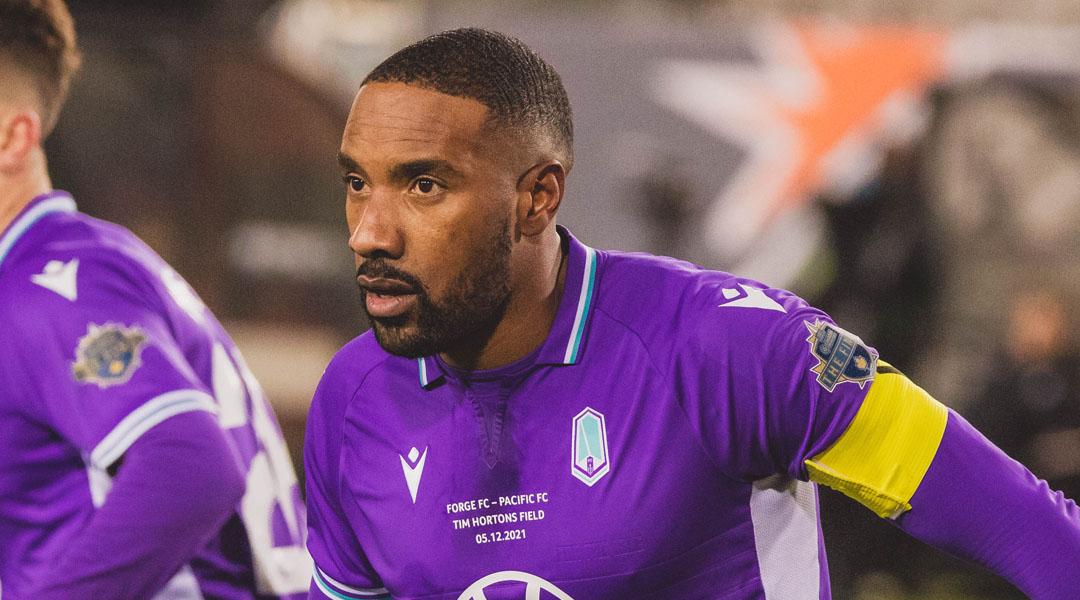 The 32-year-old midfielder was just formally announced as the club’s first returning player for Pacific’s upcoming title defense. He’s made 38 appearances for the Tridents since arriving in 2020, with the highly-physical midfielder contributing one goal during last year’s Island Games tournament.

Dixon has proven to be a key cog in the Pacific midfield, breaking up play and helping the club define its high-paced transitions. He had taken the captaincy role left vacant by Marcel de Jong following his retirement in 2021, with Pa-Modou Kah saying that the veteran midfielder had earned the opportunity – and excelled in it, too.

Jamar’s first season as club captain proved to be a big one for the west coast side, with Pacific FC hoisting the North Star Shield to record Vancouver Isle’s first national sports league in 55 years. Jamar featured twenty-nine teams for the Tridents across all competitions last year, with highlight matches seeing the side defeat the Vancouver Whitecaps in cup action and Forge FC in the league final.

Dixon first arrived to the west coast side alongside Thomas Meilleur-Giguere almost exactly two years ago, with the former Ottawa Fury man always expecting to don a leadership role. He had spent three years with the Ottawa Fury, making 89 appearances and proving to be a solid option in both midfield and a back four when needed.

The veteran midfielder had started his playing career out west with the Victoria Highlanders in 2009, with stints in Sweden and Finland taking place over the next few years before a return to Canadian soil with hometown side Ottawa Fury. Dixon has also made three appearances for the Canadian national team, making his debut against the USA in 2016.

His title-winning 2021 campaign saw him finish with the fifth-most minutes of any purple-clad athlete, with the defensive-minded midfielder hoisting the North Star Shield after a campaign that saw him lead the team with the second-most tackles and third-most blocks.

Jamar’s new deal with Pacific FC will see him remain in purple through 2022, though it’s unclear if there are any options on that – which is food for thought given that the club just saw Terran Campbell and Alessandro Hojabrpour get poached by Forge.

The Isle-based club has confirmed seven player departures thus far, four of whom were just announced yesterday. Jamar is the first officially unveiled returnee, though it was let slip earlier that both Marco Bustos and Matthew Baldisimo would return, too. While defender Lukas MacNaughton has picked up MLS interest, it is expected that the bulk of the squad will be back.

The financial details or any potential club options with Jamar’s contract were not disclosed by the club.