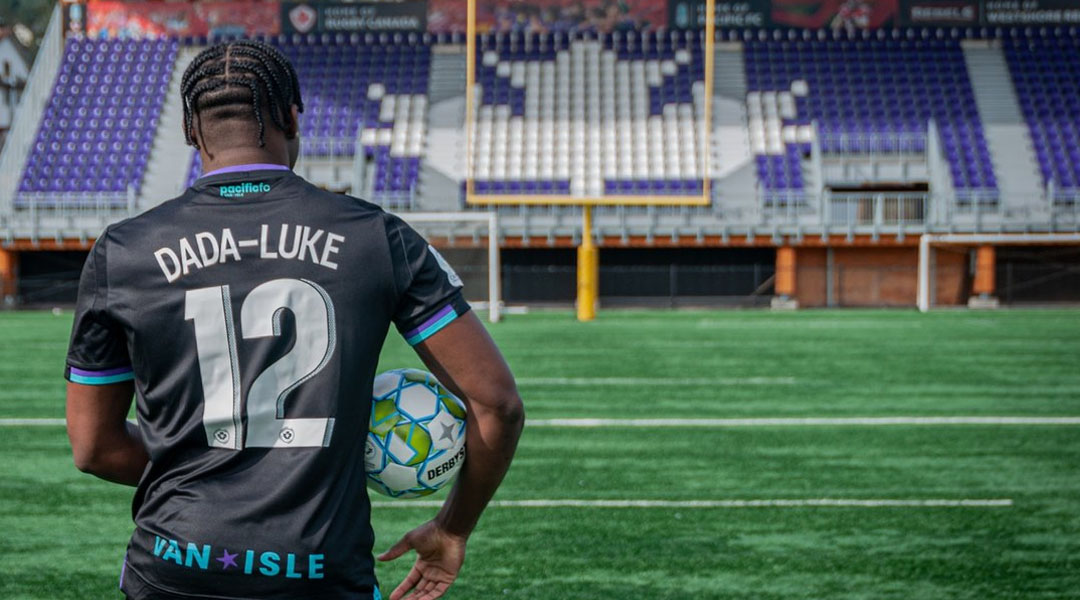 When 21-year-old full-back Kunle Dada-Luke was announced as Pacific FC’s newest signing just a few days ago, he arrived with a lot of unknowns: having missed the last CPL season, he hasn’t actually played club football since the 2018-2019 season, and now arrives on his final year of domestic U-21 eligibility.

Those pressures, however, don’t seem to faze the full-back in the slightest: calm and collected, Kunle simply says he’s ready to prove himself on the west coast, and is quite pleased to have the opportunity to do so.

It was about a month-and-a-half ago that PFC head coach Pa-Modou Kah reached out to the 21-year-old, with Dada-Luke explaining that the head coach’s mentality and a conversation about Kunle’s role with the club left him confident that a move to the west coast was the right choice to make. He spoke with his agent about the opportunity, and the deal came together fairly quickly after that.

Kunle has yet to make an CPL appearance, though he isn’t new to the league: he was signed last year by expansion side Atletico Ottawa, but picked up a preseason injury that saw him remain home while the rest of the team travelled to the Charlottetown-based bubble tournament. He’d felt some discomfort in his ankle and had it checked out, and was advised that he needed to rest and slowly rehab his ankle that summer. Playing on it, he was told, could lead to long-term issues.

So, he watched from television back home as Atletico Ottawa underwent its inaugural season out east without him.

It was brutal for me, honestly. I knew I could have been some help for the club. I knew what I brought for the team, but for me personally, it was a big blow. I was able to cheer them on and I’m happy for them with what they did in the first season.

While Kunle wishes Atletico Ottawa well, the side didn’t actually give him a mention during its final roster update regarding the inaugural squad. Now that he’s with Pacific FC, of course, that’s all in the past: he’s focused on his next steps. With his ankle now fully recovered, he’s ready to show what he can do at the Canadian Premier League level, with his belated debut now set to come nearly a full year after what fans would have originally expected when he first arrived to the league over a year ago.

I’m not feeling any pressure at all. I know what Pacific FC expects from me going forward, I know we have  a good game plan with the preseason coming up and I feel like when the time comes I will prove myself and show people what I’m capable of.

While Kunle’s time in the Canadian Premier League has always seen him described as a right-sided full-back, he had been a winger prior to transitioning to a full-back role with FC Helsingor two years ago. His positional versatility is something that Pa mentioned during their initial conversations, though Kunle ultimately expects to be playing out of the back this season.

Whether he comes in as a right winger or a right full-back, he’ll have some of the toughest competition in the CPL: those spots are occupied by Marco Bustos and Kadin Chung respectively, some of the league’s top performers in each respective position. That doesn’t bother the 21-year-old, though:

I love it. I just love the competition. You’re just ready to prove yourself and you have so much to push you day-in and day-out. I just need to prepare myself as much as possible, do what they ask of me, and just prove myself and leave it in the coach’s hands.

Kunle has already arrived out west, noting that the coastal weather has been a pleasant surprise – he packed a heavy coat, but has only had to deal with a bit of rain so far. It’s a far cry from what the weather in Ontario was like when he departed.

Kah describes him as a player with physical attributes to match the modern game. Last year saw Pacific FC impress with its quick and fluent attacking prowess, and that’s an area where Kunle will feel right at home out west:

Honestly, I feel like they benefit me more than I benefit them! I’m a very pacey player going down the line, cutting in, so their fast football really spoke to me. I know what I can do for the team going forward, it’s going to be a surprise – you’ll have to watch the season to see!

Coming from a family high on football, Dada-Luke began playing youth soccer at the age of three (yes, three) when he saw his brothers playing early on and wanted to join in. The organizer was okay with Kunle doing so, and his first little league game saw him bully his opponents with an estimated eighteen-goal performance – as he puts it, he knew he’d fall in love with the game after that.

His progression through youth football saw the Toronto FC Academy pick him up, and he gives a large credit to the MLS side for helping him develop into the player he is today. He describes it as a great experience, once making headlines for scoring an equalizing goal against Serie A giants Juventus in the Viareggio Cup. The following year saw him promoted to the first team’s USL affiliate, TFC II, where he was called up to make five appearances as a forward.

Like many domestic athletes, Kunle craved the chance to ply his trade overseas, so he secured a move to Europe to trial with Danish second division side FC Helsingor. He impressed the side, which believed he could successfully make the transition from a winger to a full-back.

I said if that’s what they believed, I believed it too. I stuck with the game plan and they transitioned me into how a full-back plays rather than a winger and helped me develop.

While his time with the side was ultimately short, he stuck with the transition to full-back and says he’s confident in his own defending, and evidently knows what he can bring forward. Now ready to train with Pacific FC, he’s fine-tuning his game with a few tweaks here and there, but expects to be fully ready when the team kicks off its third season.

Of course, it’s clear in Kunle’s comments that he’s quite keen to help on the aforementioned attacking end:

I like to size up the defender beforehand and see how his game is. If it doesn’t work against me, he’s going to have a really tough day.

While he’s familiar with a few current CPL athletes from his TFC Academy days, the 21-year-old has mostly kept his head down and focused on himself leading into the season: he says he likes to stay in his own lane and go from there, focusing on himself. He’s eager to experience what it’s like to undergo a CPL season without others telling him what it’s like.

If all goes to plan, Pacific FC could have an MLS Academy product with a high ceiling on its hands. With his right-back competitor Kadin Chung reportedly on the national team doorstep, Dada-Luke believes that he could be in national team contention following a strong CPL showing, too – and not just for Canada.

Yes, I believe anything is possible. It doesn’t matter where you play, there are always eyes out there watching you. If I have a very strong CPL performance, it can definitely put me back on the Canada radar, or even Nigeria’s radar as I have dual citizenship. I’m just keeping all my doors open and I just want to have a very good season. We’ll see what goes from there.

It’s a year that will be a real proving ground for Dada-Luke: he’s certainly got the potential, but the last two years have built momentum against him. Despite that, the 21-year-old seems more than ready to provide receipts that he can flourish at the Canadian Premier League level.

Pacific FC did not disclose the details of Dada-Luke’s contract.