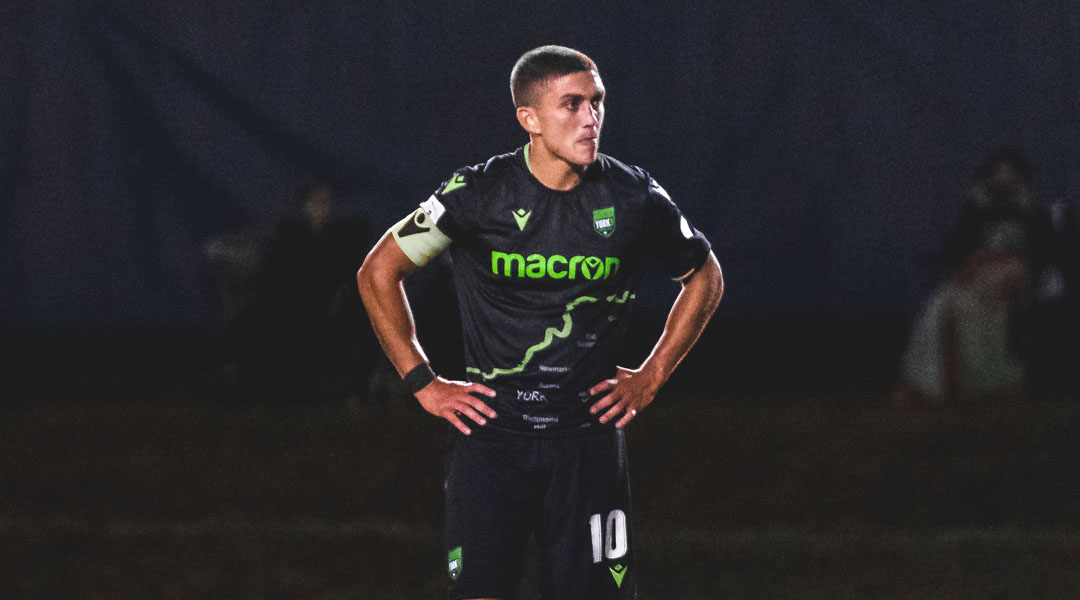 We have confirmed with PFC CEO Rob Friend that Aparicio has indeed signed on a multi-year deal.

We had previously speculated that the 25-year-old was in talks with the west coast club prior to the former York9 FC Captain penning a farewell letter to Nine Stripes fans last night.

Following his goodbyes, Pacific FC wasted little time in announcing its acquisition of the attacking midfielder. The signing falls in line with the improvements head coach Pa-Modou Kah hold told us to expect, with the side seeking to bring in goal scoring and chance creating improvements to the roster.

Manny is an ambitious player and a leader on and off the field. He is an excellent addition to our squad and family and I am looking forward to working with him next year.

Aparicio picked up a reputation as a freekick specialist at this year’s Island Games, scoring two well-placed freekick goals across six appearances at the bubble tournament. Overall, he appeared for York9 FC 37 times, scoring four goals and contributing two assists along the way.

The midfielder also has a fiery side, which as resulted in eight yellow cards during his time with the Ontario-based side (including the league’s first red card).

Given that Marcel de Jong has re-signed with the west coast side, it’s unlikely that Aparicio will be carrying the captain’s armband at his new destination. Assuming that the likes of Marco Bustos, Jamar Dixon, and Alejandro Diaz remain with the side for 2021, the west coast side has quite a high pedigree of attacking talent.

The 25-year-old called Toronto home growing up, joining the TFC Academy in 2010 and signing a professional contract with the senior side in 2013. When he didn’t break through there, he plied his trade in Spain with SD Ordenes, CD Izarra, and CD San Roque de Lepe before returning home to re-unite with Jim Brennan and captain York9 FC.

While the official press release states that he has signed for the 2021 season, a comment from club CEO Rob Friend suggests that Manny is on (or has options for) a much longer term deal:

Manny has been one of the most exciting and sought-after players in the league. We are very fortunate to have secured him for the next couple of years.

Aparicio isn’t the only intra-league transfer to make headlines this week, with his former club bringing in Chrisnovic N’sa from the east coast. The York Region club is in the midst of a significant midfield makeover, with Joseph Di Chiara having been released ahead of an expected move to Cavalry FC while Chris Manella has been linked to Atletico Ottawa.

Out west, Pacific FC has announced five returning players so far, while confirming the departure of Zach Verhoven. In our chat with the the side’s head coach last week, he stressed that continuity was key to success, indicating that the core of the squad would be back next year.

The west coast club states that more returning players and new signings beyond Aparicio would be announced in the weeks to come.

Pacific FC did not reveal the full length or financial details of Aparicio’s contract. Aparicio will don the number 34 for the club.