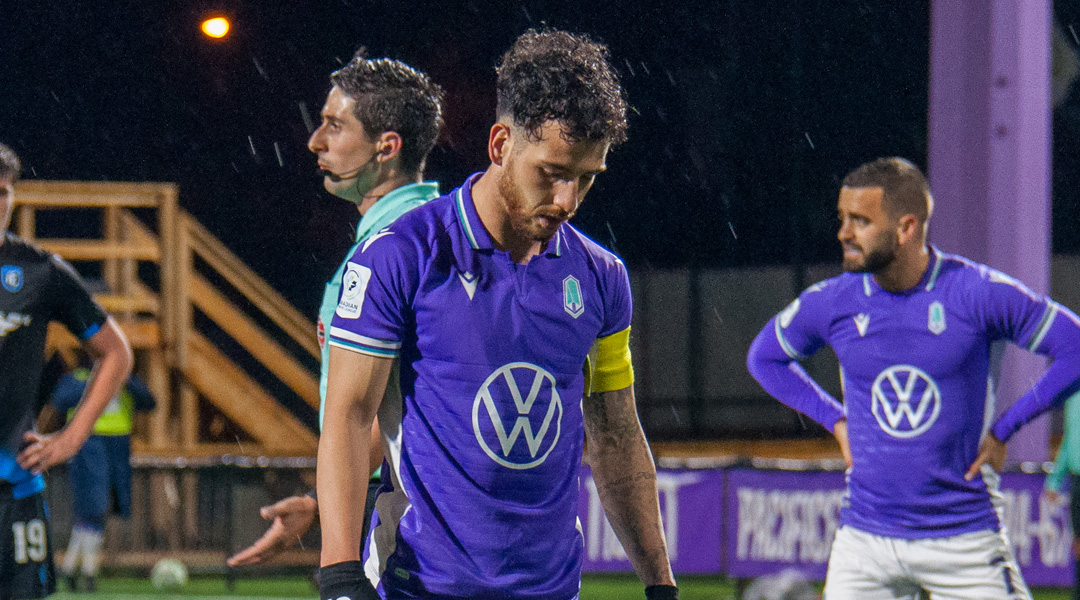 Pacific FC isn’t ruling out a return for Marco Bustos during the club’s first-ever CPL Final.

The fast-footed midfielder has been out ever since he came off at half-time in a cup semi-final against Toronto FC just under a month ago, with PFC head coach Pa-Modou Kah providing a brief update when we asked about the club’s key midfielder.

The 25-year-old has been a crucial component of a fast-paced Pacific FC attack over the last two seasons, with Bustos contributing an astounding twelve goals and ten assists through 28 appearances in that time.

Having earned an MVP nomination from the league in 2020, the midfielder was in the midst of an impressive follow-up campaign before he picked up an injury in late August. Having missed ten matches prior to his return in October, he scored a brace on his first full ninety minutes back ahead of the club’s cup tie against Toronto FC.

Perhaps having pushed himself too far to be there on the big occasion, Bustos came off injured at half-time against TFC and remained sidelined as the club powered its way towards its first-ever CPL Final half a month later.

The midfielder has kept his head down to focus on his recovery in the time since, ‘drawing the blueprint for the comeback’, as he says on social media. Until now, the club had remained quiet on the status of its star number ten.

As Pacific has proven this year, of course, the west coast side is far from a one-man show: in a previous discussion with Northern Tribune, Kah emphasized the next-man-up mentality the club has seen much success with this year.

The club’s attack put forth 47 goals throughout the regular season, eight more than the top-placed side that Pacific FC will now face in the final. That being said, Forge finished with a better goal differential, conceding a league-best 24 to the Tridents’ 34.

While it’s clear that Bustos would be a big boost to the side should he regain his fitness in time for the 2021 CPL, an earlier chat with Pa-Modou Kah showed that the head coach has several attacking players capable of stepping up when asked to:

For Marco, when he is on he’s one of our best players, but then when he’s out you want players like Terran Campbell stepping up at a huge level, or Alejandro Diaz, or Manny Aparicio, or Josh Heard. You want these people stepping up, because it’s important and that’s why we’ve been able to maintain our form and keep our levels high, because we have everyone stepping up when their number is called upon.

Between the two sides left in the running for the North Star Shield, the league’s goalscoring charts favour a westward wind: Terran Campbell has eleven goals in his second double-digit season, Alejandro Diaz has ten, and Bustos has seven alongside Forge’s Molham Babouli and Woobens Pacius.

While it remains to be seen if Marco Bustos will see any minutes in a CPL Final for the first time, it’s certainly food for thought that Kah has opened the window of suggestion. In any event, the side has played big matches without him with favourable results, like its 4-3 cup win over the Vancouver Whitecaps or its 2-1 league semi-final win over Cavalry, for instance.

Still, for a player who has shined brightly ever since the CPL’s first whistle, one can’t think that Bustos deserves to be there. The realities certainly show that this will be anything but a guarantee, though fans won’t have to wait too much longer to find out: the 2021 CPL Final is set for this Sunday at Tim Hortons Field.

The other CPL Finalist isn’t without its own key player injury worries, either: Daniel Krutzen didn’t travel with the squad to Honduras this week after picking up a worrisome injury against FC Motagua last Wednesday. This casts a doubtful look for him in the days ahead of the final.