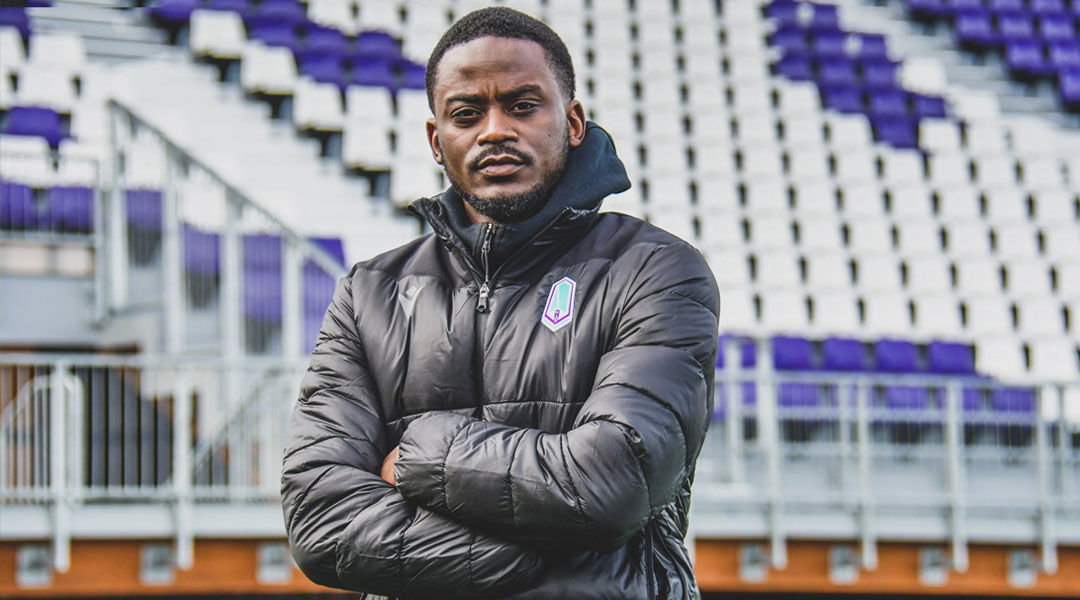 Mavila Reflects CPL Return: ‘I Always Said I’d Be Back’

Nathan Mavila’s journey away from the Canadian Premier League and back to it is a layered tale.

The 26-year-old left-back had first arrived to Canada by way of Cavalry FC in 2019, where the West Ham Academy product established himself as a top left-back in the burgeoning domestic league. After two years and 41 appearances with the Alberta-based team, he spent a year outside of the CPL before inking his return with Pacific FC.

Reflecting on the journey, the reason for his departure actually began during a time when the world was facing plenty of uncertainty: the outbreak of the COVID-19 pandemic in 2020. The CPL was still pivoting from a full length season to a shortened bubble tournament in Charlottetown, and Mavila was preparing as best he could for a second season in red-and-white.

When the calendar turned to May, however, his focus shiftily largely away from football when his partner’s father – an opthalmologist who was working in the London hospital during the pandemic – passed away after contracting the virus. Mavila yearned to be there for his missus, his family, and a tight-knit community that he knew was reeling.

“He was a pillar in our community in London,” he reflects, “he was a top doctor, and was treating patients during the pandemic. He was also a pastor, and he left behind a wife and a lot of kids. He was a massive pillar not just for the community, but for my missus and myself also.”

By this point of the pandemic, travel was heavily restricted for international athletes like Mavila. He knew it was a risk going back to England, but he was ready to take it in order to there with his family during such a difficulty time. He has no regrets in putting life first, and for its part his club understood.

“Football will always be there, but those moments with loved ones are not always there. Sometimes there are situations that are bigger than football, and this felt like it was one of them. I told them I was going back for two or three weeks to be there for my missus and whatnot. It made a massive difference. I was able to go to the funeral.”

Mavila’s return to Canada went smoothly, and he was able to get in a few weeks of training before travelling with the squad to Charlottetown for The Island Games. It ended up being a stellar season for the left-back, with Mavila bagging a team-high three goals – yes, as a left-back – before the team bowed out in the group stage.

Mavila was offered a contract extension from Cavalry following his performances in the shortened season, but after a summer that had taken its emotional toll he wanted to be closer to to his partner. Pa-Modou Kah had also reached out to him following The Island Games, but he opted to pursue a return to Europe instead.

The left-back then signed a two-year deal with Swedish side IK Brage and reunited with his former West Ham academy teammate Moses Makasi. While he was happy to be closer to home, he didn’t fit into the environment in Borlange and that reflected in his performances: after six months, a clause in the contract allowed the defender to go his separate ways by mutual consent.

He looks back at is as a simple matter of not being the right fit, but it was somewhere for him to be for six months and build experience on. Returning to England, he was reunited with his family, helping his brother in a family business, doing some coaching, and back to all the normal life stuff. It kept him busy, but he soon grew an itch to get back out on the field.

Mavila says a return to Cavalry would have been nice, but by this point the club had already brought Tom Field to replace him. A return to Spruce Meadows was thusly ruled out.

“I had such a connection with the fans and the club, but it wasn’t meant to be,” he reflects. He had previously told Pa-Modou Kah he’d consider Pacific, and so he looked out west. He liked Victoria, and was intrigued by the squad that was being assembled to retain its North Star Shield.

“I knew some of the players here like Bustos, who is magnificent, or Jamar Dixon. I saw that Didic had signed, and it was like they were going for it all again. I thought for sure, I’ve got to be part of this.”

To keep his fitness levels up as a move got sorted, Mavila had been playing for local sides Lambeth All Stars and his old non-league team Wingate and Finchley. It felt good to be back on the ball, which really reignited his desire to get back into the pro game.

“Sometimes it takes you taking a step back to appreciate and love certain things. I felt really hungry and I felt like I need to do this and do it properly, you know? I’m not a young boy anymore. I need to really, really put my head down and put my foot on the gas and keep going.”

By this point his previous contact with the club, Pa-Modou Kah, had left Pacific for an opportunity in MLS NEXT Pro, but any worries he may have had about James Merriman being the helm didn’t make it past his very first conversation with the new gaffer.

“When you’re a good person, especially as a manager, players will want to run through brick walls. James is an amazing human being who know what he wants, and knows where he’s going – he demands more of everyone, but he doesn’t go about it the wrong way: he tries to understand the person as well as the player,” he says, certain that it’s a good fit. “The way he sees football is the way I see football. He sees talent, and he doesn’t look at things that often ruin our game with all the politics behind it.”

His immediate connection with Merriman gave him a massive push to sign for the club, and things were made officially not long after that. The club held off on its announcement of the left-back until he’d safely arrived in Canada, where he’s settled in well with the squad.

“It’s a fantastic group, and I feel happy and priviledged to be here,” he says. The club’s preseason camp has seen it climb to wins over both the University of Victoria and York United, with Mavila contesting for game time with Jordan Haynes. Mavila had actually taken his spot with Cavalry ahead of the league’s inaugural season in 2019, but there’s no bad blood between the two.

“Jordan is a good guy – we’ve spoken and joked about lots, and we encourage eachother on the pitch. He’s a good player too, so it’ll be good competition. That’s what you need for a championship winning side.”

See Also: From Rejection To Redemption – The Story Of Jordan Haynes

The Tridents have done well to replace the defensive holes left by Lukas MacNaughton and Kadin Chung, who were both picked up by Toronto FC in the offseason. Mavila and Didic have proven themselves to be top CPL talents in the past, and both arrive hungry to earn medals out west.

The fact that Pacific FC is set for Concacaf League action is icing on the cake, though it wasn’t a selling point for Mavila – in fact, he had even declined to replace Kwame Awuah in a Champions League-bound Forge side before locked in his move out west.

“I couldn’t do that to the Cavalry fans,” he laughs, “if continental games were a contributing factor, I would have went there. It wasn’t. I’m looking for longevity, not only in football but outside of it. If I broke my leg today, would I be able to settle? I feel like with a few of my ideas to come, there’s a big market and holes to fill in Victoria. I’m really looking forward to being here and seeing what happens.”

Pacific FC will kick off its title defense with a home match against Forge on Sunday, April 10.