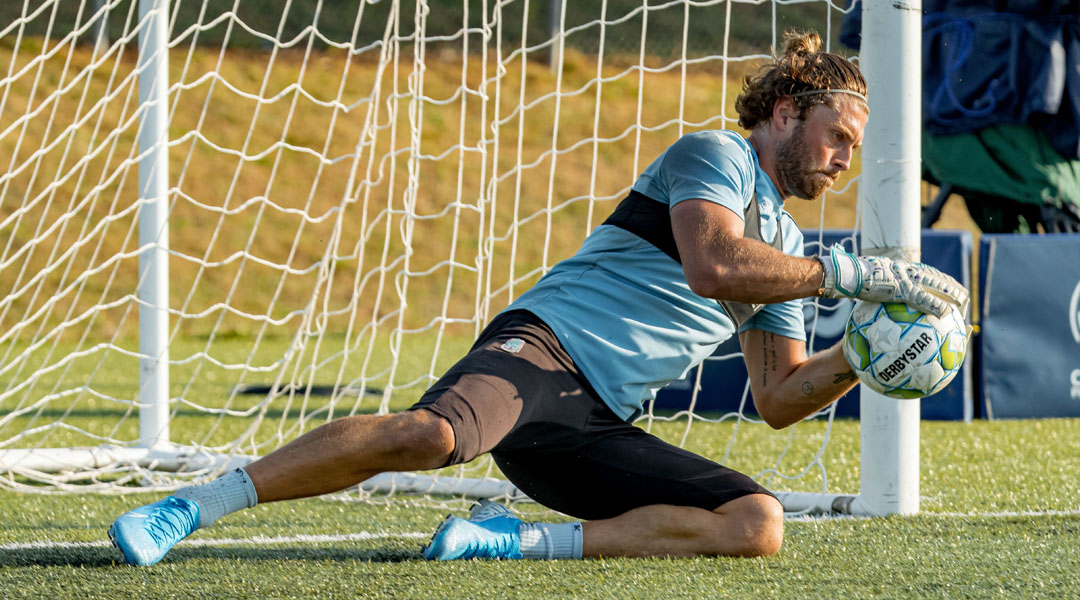 While there were many Canadian players who got their first minutes of professional in the inaugural Canadian Premier League season, not all of them are still left standing as the league approaches its third year.

One of these returning players is Pacific FC goalkeeper Nolan Wirth, who re-signed with the club after making four appearances at The Island Games this year. Out east he split time between the sticks with fellow Whitecaps Residency product Callum Irving, who many had assumed would edge into the starting spot given his time in the USL. Instead, the duo divided starting duties almost right down the middle.

Born a few hours north of Langford in Comox, Nolan didn’t presume he’d be able to play professional football so close to home after he departed from the Whitecaps Residency program back in 2013. While he continued developing with clubs like the Calgary Foothills and the Victoria Highlanders, a brief stint in the USL with Pheonix Rising – for whom he rode the bench twice – had been his closest brush with earning professional game time.

That all changed with the arrival of Pacific FC, with the 25-year-old now having made 17 appearances for the west coast side. With next season’s roster seeing almost no departures, Wirth and Irving will once again be competing for minutes under head coach Pa-Modou Kah next year.

The former FC Cincinatti assistant coach has instilled a growth in character and culture in the west coast side, replacing Danish coach Michael Silberbauer after a tough inaugural season.

It’s never easy as a player to see your coach get sacked, and then have a quick turnaround for the next year. I think when Pa came in, he had a plan, and I’ve enjoyed every day with Pa. I look up to him a lot, and I’m excited to play for him again next year.

Wirth notes that there are a lot of improvements comparing the 2019 and 2020 squads after Pa took the reigns, stating that the group went into the Charlottetown-based bubble tournament brimming with confidence and a solid game plan for the tournament.

While the club showed a remarkable improvement over last year’s campaign, not everything went without a hitch: the club bowed out in the postseason stage, conceding more penalties than any other CPL side in the bubble tournament.

The club ended their impressive campaign on a high note, dispatching CPL finalists Halifax Wanderers 5-0 after the Tridents were already mathematically eliminated from contention. Wirth collected his sole clean sheet from the campaign that night, and believes that the match can be used as a building block for the 2021 season.

I think that was just the mentality of everyone, we went out there and had nothing to lose, and I think that took a lot of pressure off of us. I think next year our goal is to do that with the pressure on.

Before Wirth and Irving both re-signed for another campaign, Pa-Modou kah made it no secret that he wanted both goalkeepers back. While Irving came in with more professional minutes in his gloves, the four-and-six match split between the duo implies that next year will feature a good goalkeeper battle, too.

As Pa says, nobody comes in with their name on the team sheet: whoever is training best will get the start. Wirth is relishing the battle.

I hope the competition between Callum and I stays and we feed off of eachother, because when we’re in training and he’s fired up and we’re going at it head-to-head, that’ll only push me to be better and vice versa.

The duo will have a familiar backline in front of them, with Pacific FC re-signing all of its defenders. Pa hopes to bring in more high quality competition to drive improvement, but so far only the midfield has seen this with the addition of former Nine Stripes captain Manny Aparicio.

The club conceded thirteen goals from ten matches at The Island Games, which lands them in the middle of the road in terms of defensive performances. It’s fair to say that a strong attack built around Marco Bustos proved the difference between a successful season and a quiet campaign, so perhaps some fresh blood in defense is called for.

Pacific FC only brought 19 players to The Island Games this year, so there’s no telling how many additional players the club intends to bring in for the 2021 Canadian Premier League season. Since the league doesn’t publish player salaries, it’s not clear how much cap space the club had remaining even with several roster spots left unused this year.

In preparation for whatever comes, the 25-year-old will return to training following the holidays to keep sharp, with Langford benefitting from a relatively tame Canadian winter out on the west coast and the significant addition of the Island Training Centre, too. Since a few of the Pacific FC roster have remained local to the area during the offseason, they plan to get together and train there.

Once the club officially begins training, Nolan will be back working with his 2019 season roster competitor in Mark Village, who took the vacant goalkeeper coach post left by Marius Rovde earlier this year.

It’s been a great transition having Mark as my teammate last year and my goalkeeper coach this year. I feel like both Callum and I were able to learn a lot from him, and he was able to pave that stone path for us to follow. He makes that job easy for us, which is all you can ask out of a goalkeeper coach.

With eighteen players from the Island Games roster now returning for the 2021 Canadian Premier League season (eight of whom were part of the inaugural squad roster), the club is enjoying a lot of roster continuity that Nolan suggests is a crucial ingredient for chemistry on the pitch.

Pacific FC has presently confirmed that all but two of the this year’s roster will be returning, with Noah Verhoeven the only unknown and Zach Verhoven the only confirmed departure. The club has also added former York United FC captain Manny Aparicio to its midfield contingent, which saw players like Jamar Dixon, Sean Young, and Marco Bustos impress in the shortened season.

The length of Nolan’s current contract with Pacific FC was not disclosed by the club.