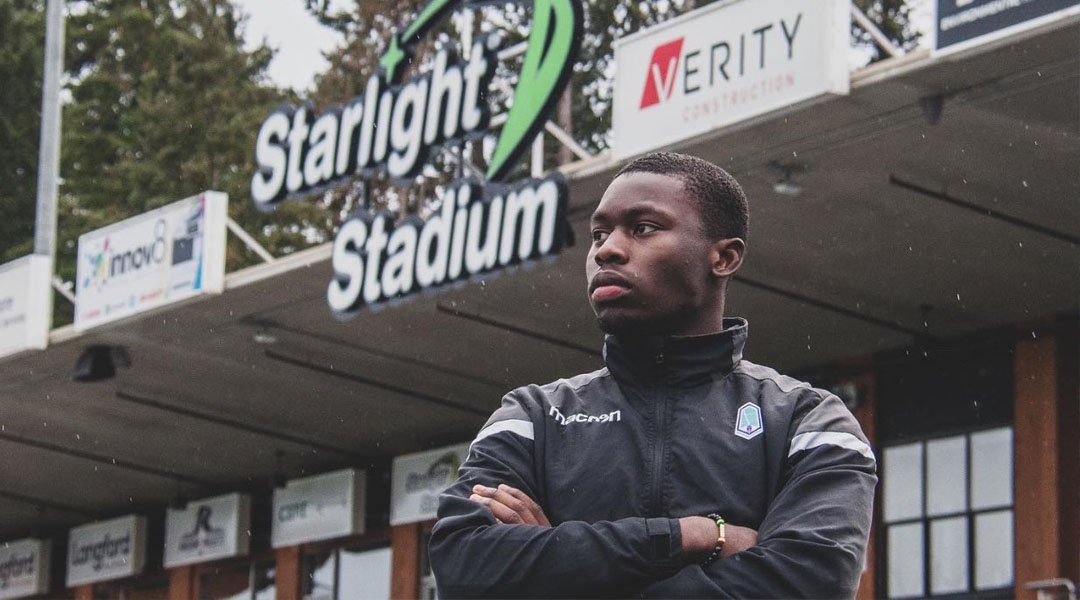 West coast Canadian Premier League side Pacific FC has signed 18-year-old midfielder Paul Amedume to a developmental contract. The six-foot-two teenage athlete is expected to stay with the west coast side for the remainder of the season.

Prior to landing in the CPL, Amedume was a member of the Whitecaps Residency Program and has been a longtime member of the Edmonton-based BTB Academy. He’ll wear the number 28 for Pacific.

I’m very happy and thankful to have signed a development contract with the club. I would like to thank all the coaches that have helped me up until now, my family for supporting me from the beginning, BTB and ATG for helping me grow and open doors for me, and to the coaching staff here in believing in me and giving me this opportunity. I am excited to continue working and growing with this club.

Amedume’s youth career got its start locally with Edmonton Internazionale SC and the St. Nicholas Soccer Academy, with the right-footed youngster eventually signing on with the BTB Academy prior to his first stint out west with the Whitecaps Residency Program. The 2017-2018 season saw him make twenty-two appearances at the U-15 level, where he also scored four goals. He was then added as part of the club’s U-18/U-19 side in the USDA the following season.

Amedume had been training with Pacific FC since mid-October, where he arrived alongside fellow BTB Academy products Dieu Merci Michel and Victor Egwu. Having grown up in the Edmonton area, he has played with and against a number of young faces now showing up in the CPL, including the likes of Ali Yildiz and Joseph Holliday, along with York United’s Matteo Campagna and Muslim Umar. A few years ago, he’d even played with Alphonso Davies, too.

Given the club’s proximity to the Vancouver Whitecaps, there are a large number of Whitecaps Residency products who land with the west coast CPL side after exiting youth system at the MLS level. Ten of Pacific’s first-team members were part of the Whitecaps developmental system at one point, with second choice goalkeeper Isaac Boehmer currently on loan from the MLS outfit.

Any minutes collected by Amedume will count towards Pacific FC’s U-21 minutes tally, with the club having already doubled the League mandated minimum.

The Tridents are currently enjoying a high-tide time under head coach Pa-Modou Kah, who has successfully guided the club into back-to-back playoff positions and has surpassed MLS opposition to reach the semi-finals of the 2021 Canadian Championship, too.

Paul Amedume has signed a developmental deal with Pacific FC and is expected to remain for the rest of the 2021 CPL season. Given the timing of the announcement, it’s likely that he’ll be named to the bench against FC Edmonton tonight.