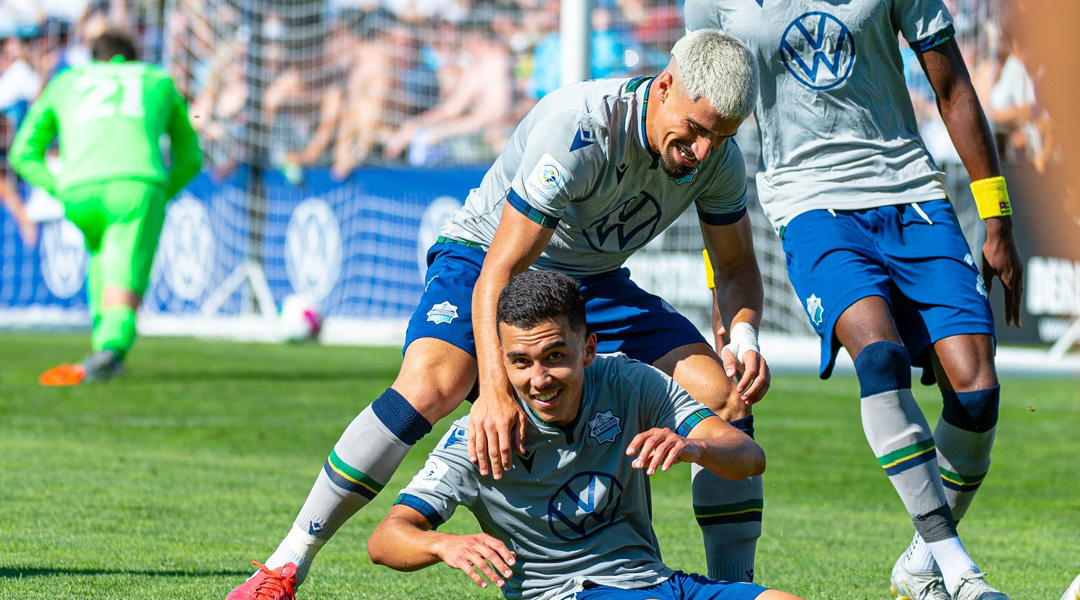 Quebecois midfielder Pierre Lamothe recently traded the east coast for the west, with the out-of-contract Halifax Wanderers midfielder being unveiled as a new addition for Pacific FC earlier this week.

The 25-year-old had made 48 appearances across all competitions for the Halifax Wanderers, adding three goals and two assists during his time in blue. His arrival to the CPL came after many had long-suspected a move to professional ranks, something he described as a big weight off his shoulders.

“In my first years I wanted people to get to me as a a player, and prove that I can play that level,” reflects Lamothe. “There were some hard times because I had to adapt myself to the upper level, and to adapt myself to training five days a week again. And yeah, I had some hard moments because some games I was playing well, and in some games I was frustrated because I knew I could do better.”

“I think in my two seasons with the Wanderers I always finished the season pretty well. If you look at the last few games of both seasons, I started most of the games so that was good for me, and one thing that I’m proud of too: I was almost injury free all the time.”

Pierre had received a few notes of interest after going out of contract with the Halifax Wanderers, who were awaiting to bring in a new head coach before potentially offering to re-sign him. Lamothe opted to take flight, inking a move that sees him fly from east to west and boldly saying that at this stage in his career, he wanted to win.

We asked him to elaborate on the strong statement:

“It was important to me to choose a project that that will allow me to progress as a player and have a chance to win the title, and at the end of the day I think Pacific’s project, system, and playing style will benefit my qualities as a player. I can really see myself performing that team. I think I can add my touch to an already good team. I’m very excited for the challenge.”

The midfield ranks include a familiar face in Cedric Toussaint, who arrived to Pacific as an absolute steal from York United this year, along with forward flanker Josh Heard and Island original Sean Young. It remains to be seen if Manny Aparicio will be remaining with the club, with the key attacking influence telling us he had some choices to make regarding what’s best for his family. With Marco Bustos having trialed with Toronto FC, his offseason is always filled with the question of what might come next, too.

“I know I have to battle for my spot, for sure,” says Lamothe, “I’m confident I can find my place in the team.”

Lamothe proved himself to be an astute passer in the league, and that’s something that lends itself well to Pacific’s method of possession with intent. “I think I can score more and provide some answers there,” adds Lamothe, who was attracted to the club’s purposeful front-foot philosophy that was instilled by Kah and has been carried brightly by Merriman, too.

While it’s no secret that Pierre can get forward, where he hopes to add a few goals and provide some answers for the Tridents at the top of the pitch, he hasn’t set any specific numbers for himself: he just wants to get the most minutes possible and contribute in whatever manner he can.

The collective win is the goal, he says.

Toussaint won’t be the only familiar face in the squad for him, as he knows centre-back Thomas Meilleur-Giguere well from the duo’s Impact days. While he’s looking forward to playing with him again and says it’s nice to have some French-speaking familiarity out west, he says that there’s plenty more of it waiting to be noticed back home in Quebec.

Before his own jump into the pro ranks, Lamothe cut his teeth with CS Longueuil and AS Blainville, clubs that hail a semi-professional level of La Belle province that has also helped produce talents like Mohamed Farsi, Diyaeddine Abzi, and his former Wanderers teammate Zachary Fernandez.

“The PLSQ was very important for me, because that’s when I started playing against men. I think the only difference between the that pro level of the CPL and the PLSQ is maybe the speed of the game, but there are a lot of talents playing right now in the PLSQ who I believe have the level to play in the CPL, for sure.”

While Pierre Lamothe is benefiting from a professional domestic league that didn’t exist just five years ago, like many athletes he has his sights set on someday reaching a higher level, too.

“I think it’s important for a soccer player who is ambitious to have dreams and objectives,” says Pacific’s newest midfielder. “I would like to experience Europe at some point, or even MLS. What’s important for me right now, though, is to concentrate on the present and do what I can do everyday to improve, and I hope my performances will help me get to those objectives.”

Pacific are expected to reveal more player signings in the coming weeks, with the Tridents having also brought Easton Ongaro back into the league.