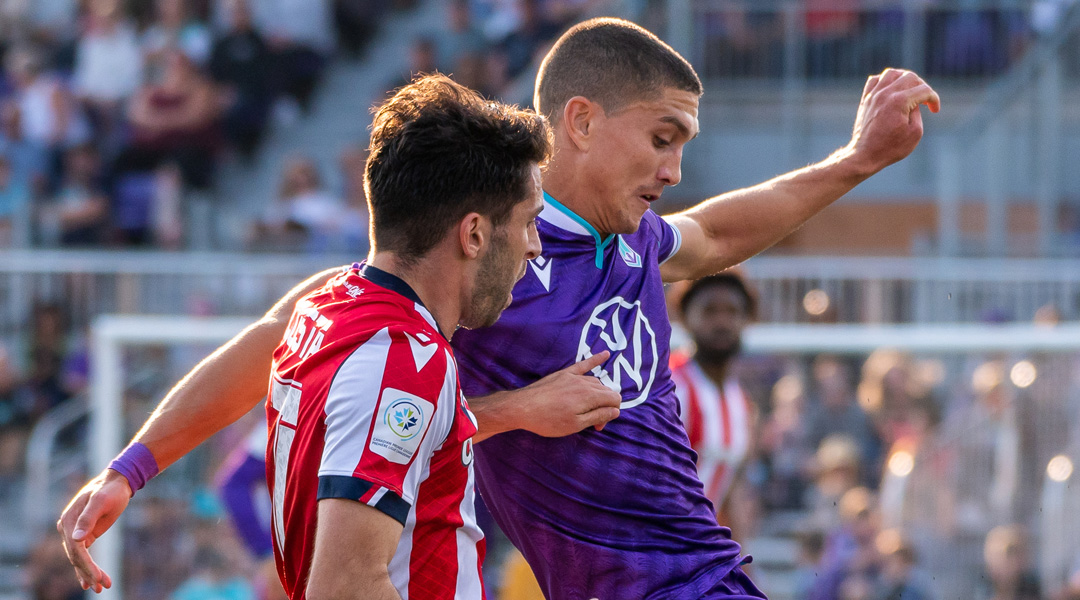 If Pacific FC are to mount a playoff comeback against the the regular season champions this year, one imagines that Manny Aparicio will have played a role in it.

The 27-year-old attacking midfielder has proven himself to be a vital component of a Pacific FC squad who can produce highlight-reel goals and, perhaps more importantly, create them from just about any situation.

Speaking with Northern Tribune, Aparicio confirmed what many had expected regarding tomorrow’s must-win playoff match: Pacific FC are going for broke, and he’s ready to do what it takes to mount an against-the-odds comeback in the nation’s capital.

Pacific had been excited to host the first leg of the semi-finals, but the taste of anticipation turned to ash after the visitors secured a two-nil win away from home. Pacific applied plenty of pressure and struck the post early in the second half, but counter-attacking goals from Ballou Tabla and former Trident Zach Verhoven (credited as an owngoal to Mavila) saw Atletico Ottawa take the first leg.

Having had time to lick their wounds, Pacific has been watching video of the match closely, seeing where things broke down for them and what promising segments they can carry into the second leg. For Aparicio, the strategy is clear: at the first whistle, it’s shock-and-awe time.

“We’ve gotta go guns blazing straight from the first whistle,” declares the midfielder. “It’s not like we didn’t have chances in the first leg. We’ve been looking at what worked and we’re going to try to get more of that.”

The season as a whole has been fairly even between the both sides, with Pacific and Ottawa each winning twice and only one draw. None of those matches saw Pacific score more than one goal, but now that’s a must if the club’s title defense campaign wants to reach the final.

“We’re good when the pressure is on us,” says Aparicio. “We have our back against the walls, and we’ve shown that we can actually be better in those scenarios – and I think we should tap into that.”

Aparicio says the squad will leave everything on the field for what will be team captain Jamar Dixon’s swan song. While Aparicio focuses on what he hopes will be an all-time classic comeback for the Tridents, what happens after remains to be seen: he’s on the final year of a two-year contract after flourishing under both Pa-Modou Kah and James Merriman.

The transition between the two coaches has been smooth, with Aparicio describing Merriman as similarly setting the bar higher and higher, stating that’s the best thing for the club and something other sides from coast-to-coast should have more of.

“We’ve seen how good Canadian players can be and how all these young players are up and coming, and keep on getting better,” he says, specifically sending a nod to local island Sean Young. “He’s been playing excellent, he’s been up and down the field. He’s on every phase of play. A modern day number eight, and he’s only 21. Honestly, the difference between last year to this year, that stepping stone he took forward, that’s been huge.”

Merriman led the club into it’s first bout of continental competition this year, where they experienced multi-legged competition and what it meant to mount a comeback in knockout competition: having lost the first leg against Costa Rican side CS Herediano at home, they went into the away leg with a goal deficit. Through a late Gianni Dos Santos goal, they forced that match to penalties – and while they didn’t win that, they experienced going into a tough away leg with nothing to lose. Aparicio believes they can draw on that tomorrow.

Of course, the former Nine Stripes captain is far from the only threat in the proverbial Pacific toolbelt: Marco Bustos hit the post in leg one, a moment that could have changed the face of the game dramatically. Heard has been ‘scoring goals for fun’, Jordan Brown came ever-so-close to bagging one back in the opening leg’s dying embers, and Kamron Habibullah put in a strong showing in the first leg, too.

“He has amazing qualities,” adds Aparicio on the youngster. “sometimes I look at these guys and I’m like wow, I’m getting old,” he laughs. “He has so much raw talent. He trains hard everyday, and he has go much talent on the ball, shielding it with his body, he’s able to spin off defenders like crazy. He’ll be a good one for Canadian soccer because If he can really tap into it, he has so much potential.”

While we all know Manny has goals in him, he doesn’t care where they come from: he just wants Pacific on the scoreboard.

“If I can get myself in there, even better, but I’m just try to get my teammates in there. I don’t need one for myself, we need to get them as a team to get over this semi-final and get into the final itself.”

While Pacific’s attack has lost a crucial piece following the controversial midseason sale of Alejandro Diaz – something that Langley-bound CEO Rob Friend affirmed the club was keen to celebrate – Aparicio is confident that the goals can come with everything down to the wire.

The excitement hasn’t all been on the pitch, though: Manny got married out west earlier this year, and another ceremony is still yet to come in Colombia. Having the support structure of his wife has helped him a season that has had plenty of highs and lows, specially with two separate suspensions and an injury spell.

“When things are going well then everything off the field is amazing, but the tough parts come when you’re losing and when things aren’t going as well – that’s when the people you lean on, they come for you and make it all better,” he says of his wife.

The development comes at a pivotal time in his playing career: now at the end of a two-year contract, he’s approaching the offseason knowing that his choice on where to play next year has a significant impact on family life, too. The player of the year nominee has already received interest from multiple parties, with the Tridents also interested in a new deal.

For now, however, he’s locked in on spoiling Atletico Ottawa’s first-ever home playoff match. The sharp midfielder – one of the Tridents’ prongs, if you will – is keen to continue the culture that club has pushed for three years now: they’ve got belief, and they’ve got to go for it.

“If we go full out going forward, and then we get scored on and we lose three-nil, four-nil, then overall it’s the same thing as losing two-nil overall already. At this point, we have nothing to lose – if anything, Ottawa should be the ones a little bit more worried and more shaky because if we pop on in the first half, then anything can happen. It’s football.”

It’s looking like fans tuning in to the action on TD Place should gets a ‘guns blazing’ Pacific right from the get-go, with their trademark fluent attacking mentality that has now guided them to three consecutive playoff runs and, of course, a North Star Shield win last year.