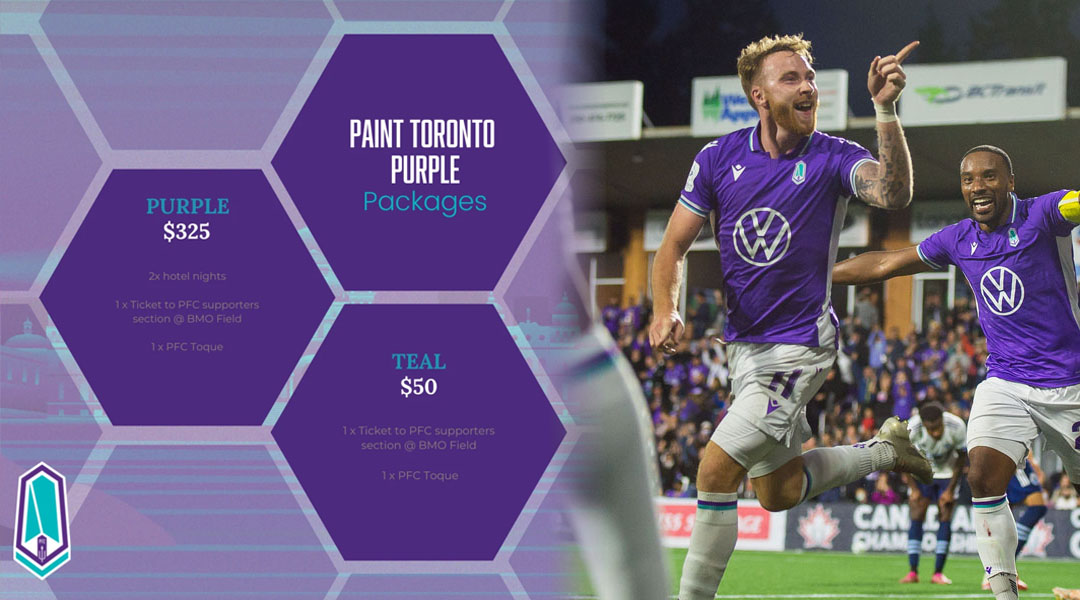 Pacific FC is hoping to provide a splash of purple at BMO Field when it plays a Canadian Championship semi-final against Toronto FC there on November 3.

The Tridents are offering travelling fans an away package that includes a two-night stay at downtown hotel, a supporters section ticket to the match, and a presumably purple PFC toque for the club’s Canadian Championship semi-final.

They’ll be the second CPL side to travel to the venue for the domestic cup this season, with York United having been soundly defeated there on a rainy night in late September. With Pacific’s match set for November, a toque seems a very weather-appropriate part of the package – though whether enough fans take PFC up on the offer to provide a big splash of purple at BMO Field purple remains to be seen.

The $350 package does not include airfare, with Air Canada and Westjet’s return fares between Vancouver and Toronto clocking in around the mid-300s for midweek flights, while discount airlines like Flair drop as low as $200.

Canadian Premier League sides offering travel packages to fans for matches against MLS opposition isn’t unheard of, with Cavalry FC having offered an airfare, shuttle, hotel, and match ticket combination for its eventual win over the Vancouver Whitecaps in 2019.

Pacific FC side had offered a cheeky merch swap deal ahead of its Canadian Championship match against the Vancouver Whitecaps earlier this year, which the CPL side won in a 4-3 upset. The club then secured passage to the semi-final after dispatching Cavalry FC in the quarter-finals.

Pacific FC head coach Pa-Modou Kah had hoped to host Toronto FC for the semi-final, but both sides requested to remain home for the single-leg cup fixture – so a reported coin flip by Canada Soccer decided that BMO Field would be the venue.

The other semi-final will see reigning Canadian Premier League champions Forge FC host CF Montreal at Tim Hortons Field. Forge will also host Toronto FC there eventually for the belated 2020 Canadian Championship Final, though this will likely be delayed through to 2022 after the 2021 victor has already been determined.

Kah’s side is riding high at the top of the Canadian Premier League table, though a potential late season drop in form has now seen the side collect two losses on the bounce. In contrast, Toronto FC is finally beginning to procure results after a horrendous overall season, going undefeated in its last four MLS matches.

Pacific FC is also running an offer for CPL fans who don’t need a hotel stay, offering a supporters ticket and PFC toque combination for $50.

Interested fans can take a look at both travel deals here.