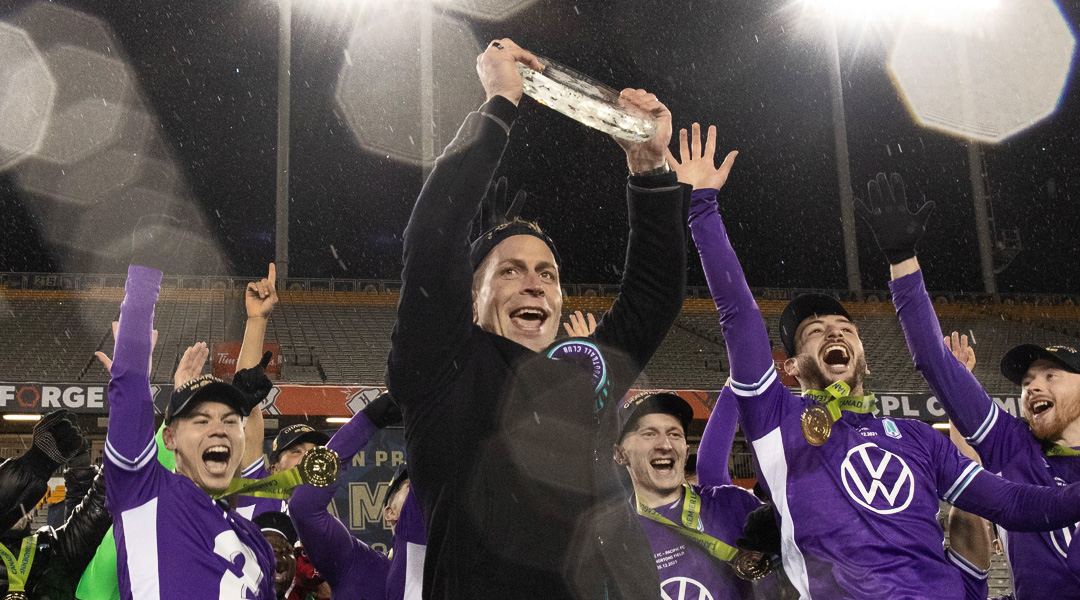 Pacific ‘Has Target On Its Back’, Says Friend

The 2022 Canadian Premier League season is still months away, but there’s already blood in the water.

This weekend saw saw two club originals from reigning champions Pacific FC ink deals with previous two-time winners Forge FC, completing a transfer that both Pacific head coach Pa-Modou Kah and club CEO Rob Friend echoed their disappointment with:”I had bigger hopes for those two, to be honest” stated Kah, who had envisioned the duo moving abroad if they were to depart.

Gone are Terran Campbell and Alessandro Hojabrpour, the former of whom is the club’s all-time appearance and goal leader, while the latter scooped up the league’s Best Canadian U-21 Player award this year after scoring the title-winning goal at Tim Hortons Field.

Forge has yet to formally announce the duo, with Pacific FC’s disclosure of their new destination evidently spoiling the slow-drip media plans of the Hamilton-based side.

Still, their sudden exit provided a sting at Starlight Stadium. In an interview with the Times Colonist this weekend, Friend stated that the upcoming campaign will be a testing one for his side, as everyone will have it out for both the club and its players following the their title win.

We have a target on our backs now and other clubs want our players. I’m disappointed in the decision those players made and I question that decision, but I am very confident in the foundation we have laid, and the squad we have, and the fresh, key pieces we will be adding to the team with some very exciting announcements coming soon.

“That is part of winning,” echoed Kah, “your players suddenly become attractive. In 2019, nobody was looking at these two players.”

With Campbell and Hojabrpour moving to Forge, Toronto FC eyeing Lukas MacNaughton, and Victor Blasco signing with Honduran side CDS Vida, this weekend’s news prompted Pacific fans to ring alarm bells regarding who all would be coming back.

We’d heard a number of players were signed to two-year deals last season, and perhaps to alleviate some concern Kah revealed two of them to the Times Colonist: Marco Bustos and Matthew Baldisimo.

While the 2021 season saw club star Marco Bustos spend a significant amount of it on the sideline through injury, the 2020 CPL MVP nominee still put forth an astounding seven goals and seven assists in 18 appearances. The club talisman has been an absolute phenom at the CPL level, contributing 19 goals and 13 assists after one season with Valour and two with Pacific.

Kah has always said that Bustos could make an impact at the MLS level, but he’ll make an even bigger impact for Pacific should the creative attacker stay healthy for a 2022 campaign that will see him get his first taste of continental action since his days with the Vancouver Whitecaps.

Returning midfielder Matthew Baldisimo had missed nearly all of the club’s third campaign through injury. He achieved just 190 minutes of action across seven appearances, but appears poised to resume regular activities this year after having been a proved in 2019 and 2020.

Last season also saw the former Canada U-17 accept multiple call-ups to the Philippines national team, but he was unfortunate not to make his debut due to both paperwork issues and the aforementioned injuries.

Pacific FC is still keeping most of its cards close to its chest, so it remains to be seen who else will return from the club’s title-winning campaign – and which fresh faces will be sprinkled in. With Friend teasing that news is coming soon, a better idea of the club’s title-defense roster will come in the near future.

While Terran and Alessandro’s exit proved a messy one online, Kah told the Times Colonist that there is no ill-will between the parties.

“There is no bad blood. I have great relationships with both players. After three years, they have an everlasting bond with PFC with a championship, and now they want something new.”

CPL Commissioner Steps Down To Helm New Expansion Side