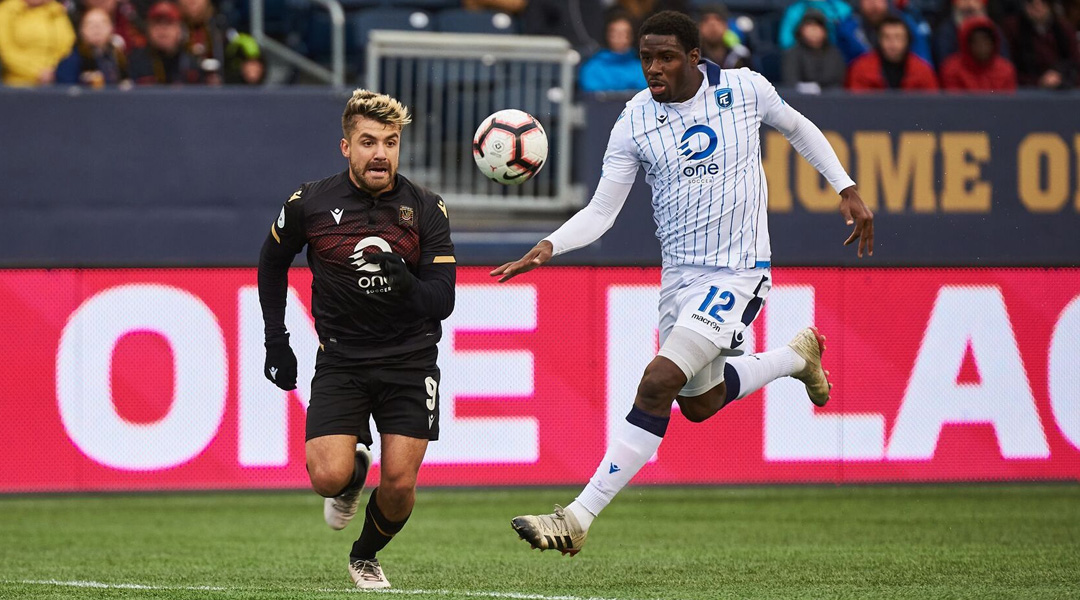 The battle for third place in the inaugural Canadian Premier League fall season has seen the slot change hands several times throughout the last few months, and today the Eddies had a chance to retake the position by snapping a winless streak that stretches all the way back to August 10. Unfortunately for FC Edmonton gaffer Jeff Paulus, Valour FC celebrated fan appreciation night in style with a comfortable 3-1 home win at IG Field, with the Winnipeg-based club climbing to third place instead.

A second half goal from Eddies youngster Easton Ongaro goal prompted thoughts of a comeback result, but a questionable penalty call in the week succeeding plenty of referee-based drama saw Valour FC retake a two goal lead to see out the game.


FC Edmonton gaffer Jeff Paulus wasn’t pleased with his sides performance: even with Valour FC deploying the likes of Ali Musse and Marco Bustos as makeshift wing-backs amidst a season-long injury crisis for the home side, the Eddies found themselves unable to string passes together and get the ball into dangerous channels. Offering a stark assessment of the match, Paulus didn’t hold back his thoughts during some post-match questions:

We’ve been poor. We’ve been poor in possession, it’s just schoolboy errors that we’re making as players. Again, a ball comes from the right, open up, go to the left and there’s no danger, but we don’t. We play it right back where it came from, and they’ve counter-attacked, and there’s their first goal. Second goal, it’s our set piece which was horrendous. At the end of the day, if we can’t get a ball into the box, and we’re a big team that does well at set pieces, but we can’t even get a ball in there, so we don’t give ourselves a chance to win when we play like this. Frustrating.

Having scored just three goals in its last seven games, FC Edmonton’s goal-scoring form has drastically slowed down compared to its strong fall season start, with the club previously utilizing a secret analyst to help end a goalscoring drought at the end of the spring season. Ongaro’s rise in the fall came at a prime time for the Edmonton-based side, with the youngster scoring eight of the club’s fourteen fall season goals so far.


Paulus was also complimentary of the victorious home side, who had started in a 3-5-2 and eventually shifted into a 4-3-3 in the second half after Paulus had attempted to rally his side after it came into the locker room at half-time two goals down:

Well done to them. You know, the first half I thought they were very, very good at going forward. I still felt we held, you know, we did okay. Then the second half was a little more direct, went back to a 4-4-2 because we couldn’t play football anyhow – we can’t pass or receive a pass so you might as well go direct.

While Paulus didn’t shy from digging into his own side’s performance, Valour FC gaffer Rob Gale was a bit more complimentary to FC Edmonton’s threat in the box, which includes several large figures like Amer Didic, who recently received a called up to the Canadian national team.

Full credit to Jeff and Edmonton, because you know they’re going to come at you. They’ve got big boys, they’re going to put pressure on your back line. […] Fair play to them, because they did respond. Jeff gets them always in the second half. I think he’ll feel let down that he doesn’t get them going in the first half, because they’ve got the ability to cause teams problems with their size and their directness, but we manned up well. We went down to two natural defenders and saw out the game. I’m absolutely delighted for the players, they were first class today.

If FC Edmonton wants to improve on its current sixth-place sitting, it’ll need to secure results against Pacific FC and Cavalry FC as the inaugural fall season comes to a conclusion. Having jumped to third place, Valour FC will close out the season against York9 FC and Pacific FC.

With the fall season evidently not going fully to plan for either side, the first-ever Canadian Premier League Finals will take place between Cavalry FC and Forge FC in a two-legged contest set to take place in the last weekend of October and the first of November. It’s not yet known if the historic matches will be broadcast on CBC, though it will certainly be available to OneSoccer subscribers.