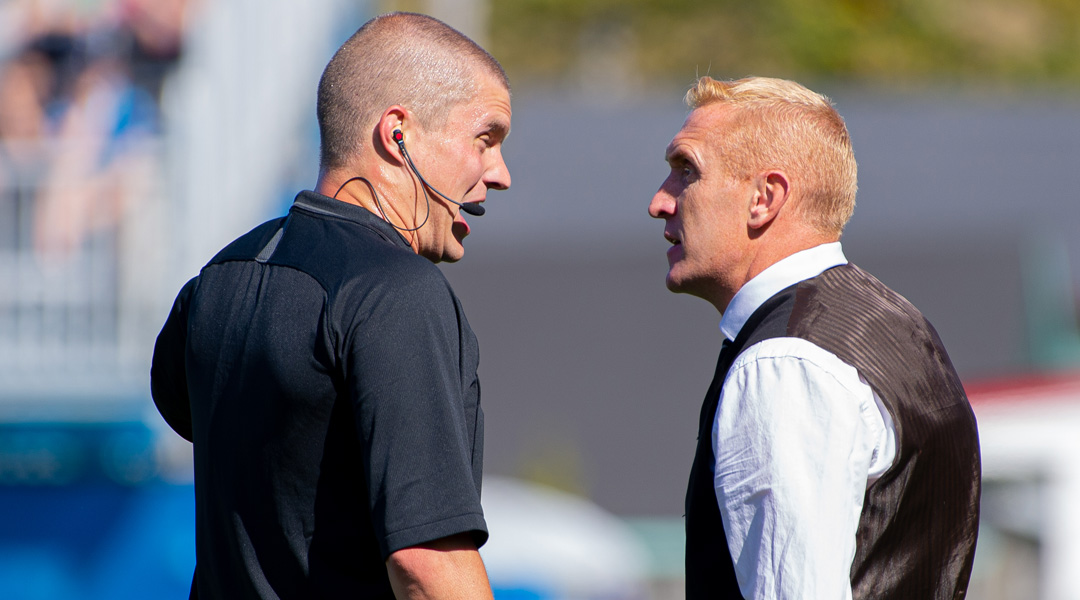 When the final whistle sounded at Wanderers Grounds yesterday, Valour FC head coach and general manager Rob Gale was asked for a few post-game comments. While the 42-year-old coach acquiesced to the request, his short and blunt answers were indicative of the frustration his Valour FC side felt: with Ali Musse having been held back by Chris N’Sa in the box, Gale thought his club deserved a clear-cut penalty for the infraction. It was not given.

Speaking with OneSoccer on the sidelines following the match, Gale was blunt in his assessment: he says his side deserved more, and when asked about the no-call penalty decision, he says that he saw something that the linesman obviously didn’t, and not for the first time at Wanderers Grounds.

Rob Gale’s Valour FC squad currently finds itself in fourth place after collecting sixteen points from fourteen games. Gale may not have been happy on the day, but the club’s current position is still a marked improvement over Valour’s last-place finish from the spring season, even if the gaffer feels calls aren’t going his way.


If Gale’s club had the potential six points he says they probably should have if referee decisions went a different way, that would put Valour FC tied on points with second-placed Cavalry FC, a club which once battered Gale’s side 8-0 in the league’s biggest blowout win.

Gale’s comments were brief likely for his own sake, as jumping into referee criticism is like to get coaches and clubs alike fined by the league. When FC Edmonton head coach Jeff Paulus criticized referees after his side’s Canadian Championship loss against York9 FC, he was quick to apologize on Twitter for his comments the next day.


Gale, who doesn’t frequent social media, is less like to offer an apology: after all, this is far from the first time he’s lamented referee decisions. It’s been a rough inaugural campaign for his club, which has had to contend with plenty of injuries and a pitchside debacle that resulted in the club’s team captain stepping down, though the fall season has seen some bright spots with the occasional clinical victory and the emergence of Tyler Attardo.

Gale has been one of the more vocal critics of CSA referees, with his post-match comments having prompted Kurt Larson to speculate if the boisterous crowd at Wanderers Grounds might have an impact on CPL referees. For now, Gale’s comments haven’t crossed a line (at least publicly) with league officials, but if anyone is going to get fined for criticizing referees in the league, the Valour boss seems like the most likely culprit, whether he has a point or not.