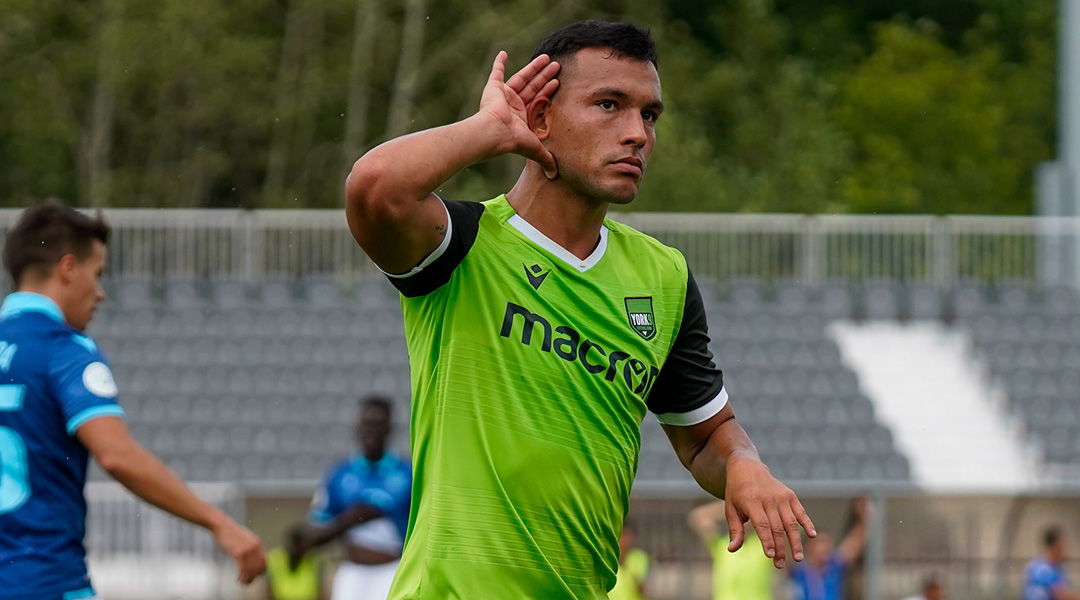 27-year-old Chilean striker Rodrigo Gattas doesn’t speak much English, but he’s enjoying life in Canada: after signing for York9 FC a day before the inaugural Canadian Premier League season kicked off, he’s scored seven goals in his first 22 appearances for the Nine Stripes. He also etched his name into league history by scoring the Canadian Premier League’s first-ever hat trick as the club fights to rise up the fall season league table.

Speaking with Chilean outlet PubliMetro, the Santiago-born striker talked about his first few months in Canada, his impressions of the league itself, and disclosed some unverified information about planned salary cap growth which includes – interestingly – the potential idea of the CPL introducing a designated player rule similar to that of Major League Soccer.


Gattas has been enjoying life in Vaughan for the last few months, though it turns out that the striker arrived in Canada without high expectations regarding the level of play in the Canadian Premier League. He found himself – like many others – surprised by the quality of the league:

Well, you know it surprised me, I thought it wasn’t going to be that good. There are plenty of young players who have a very good future and I think that over the years, the league will grow. They want to copy MLS and they’re going to go little by little. It’s more physical, because the structure of the Canadians is thick, they’re tall and strong, maybe technically they’re not that good, but there are some who are.

His certainly spot-on about the physicality of the league: referees have set a precedent that fairly physical play is allowed, and fans have maintained an environment where diving and embellishment aren’t tolerated. If the league is to truly catch on in a Canada, that kind of behavior certainly can’t be a mainstay.

Gattas chatted about the ambitions of the league, and how he feels it stacks up to Major League Soccer. Responding to a comment that the league was developed with the upcoming 2026 World Cup in mind, Gattas found himself agreeing with PubliMetro:

From what they tell me, they had always wanted to make a league and had never been able to, but they got fed up with sponsors and brought together enough people so that it could be done. Here it’s all first level, the courts, the stadiums, the training sessions. They did well from the beginning and you can see that it is going to grow. We played two weeks ago against the Montreal Impact of the MLS, for the Canadian Championship, and we were eliminated by a penalty, so there’s not that much difference.

The burgeoning league has been criticized for not revealing the ceiling height the salary cap it imposes on each Canadian Premier League club, which has been rumoured to be under a million dollars. Interestingly, Gattas indicates that not only is salary cap going to go up in the 2020 season, but the league may implement a designated player-type system akin to the MLS which would allow one (and, in the future, more) players to exceed the salary cap:

Look, the league started with some budgets, I don’t know the amount, like the MLS, the same for all the teams. Next year it’s going to go up and the idea is that one player per team can get out of that budget, then two and grow, to bring those figures who come back, but have a name and attract the public.

The ramifications of Rodrigo’s comments are huge, as it means that ownership groups will theoretically have the option to make a significant marquee signings for each club which may not have been otherwise possible. The idea of designated players isn’t a new one, but the league has never stated if it would eventually allow this. To that end, it still hasn’t – though Rodrigo’s comments may prompt an official response.

Of course, it’s possible that Gattas simply means that players who come in with higher wage demands – to levels less drastic than one imagines when the term ‘designated player’ is mentioned – will eventually find a home in the league. Still, the idea of the salary cap potentially growing already is news enough.


Back to the present, Chile national team manager Reinaldo Rueda has now attended matches for two different Canadian Premier League teams: he took in a Forge FC game a few weeks ago, and was present during York9 FC’s recent loss to Valour FC. Rueda’s daughter lives in Toronto, so it makes sense for him to be there – though it’s still food for thought that the head honcho for La Roja was watching a game with a Chilean striker. Rodrigo had a frustrating night, seeing a penalty saved as his club fell to an 0-2 loss.

I didn’t expect it at all. Before the match I was told that the Chilean coach was with his family and that they were trying to find a comfortable place for him in the stadium, but he, very humble, didn’t want to and saw it where all the people were. For me it’s a source of pride, regardless of whether tomorrow comes or not. It’s an extra motivation for what’s to come.

Despite not converting in front of Rueda, it’s fair to say that Rodrigo’s first few months in Canada have been pretty positive otherwise: he scored a high-profile goal against Montreal Impact in the Canadian Championship quarter-finals, and his hat-trick from July certainly made waves, too.


During a media scrum following the hat trick, a Spanish-speaking translator aided the interview process. At one point, Rodrigo jokingly told reporters – in English – that he’d be able to chat in Canada’s official language next year, suggesting that he’s keen to stay.

If the league truly intends on growing the salary cap in its second season along with implementing a rule where clubs can sign marquee players above the salary cap, he probably won’t be the only one keen to stay, either.

Whether that happens or not, the league is still looking like it will expand ahead of the next season. Gattas is confident that it will.