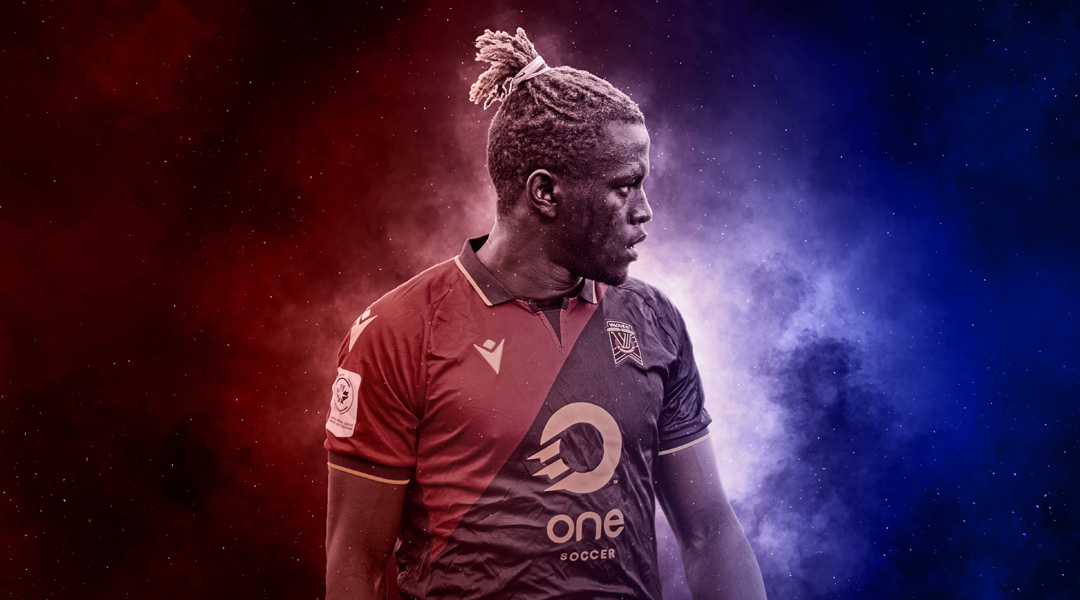 Just one-and-a-half years after breaking into the professional game, William Akio now arrives to Ross County FC on a three-year deal after bringing his scoring tally in the Canadian Premier League into the double digits.

The 23-year-old South Sudan international is a familiar face to dedicated CPL fans, though the world at large may only have recently seen him for a viral miss. With that already in the rearview of the steadfast striker, Ross County fans can expect to see a speedy, versatile forward capable of breath-taking runs, sharp crosses, and tidy finishes too.

The newest Ross County FC signing sat down with Northern Tribune to talk about his challenging journey to reach professional football, his time in the CPL, and what’s still to come.

On His Move To Ross County

The last few years have been a whirlwind for the South Sudanese international, who went from playing college ball to breaking through the professional circuit, featuring for his national team, and adapting to a variety of playstyles between several coaches.

“I feel like I’m going to fit in perfectly fine,” he says regarding his new club. “I feel like this is what I’m meant to do, I’m a player that can really adapt to anything. There’s a reason why I feel like Ross County was was really wanting me. They see something in me that I can help the team with.”

From the moment Akio heard that Valour FC had accepted an as-yet-undisclosed offer from Ross County for the striker, he hopped on YouTube and began absorbing all the Ross County content he could. His younger brother had recently signed there, so he also had a pipeline of first-hand information on what to expect.

“It’s a long way coming, and it’s honestly a dream come true,” he says, “It’s a little emotional, a little hectic. I’m very, very happy – it’s been a while since I’ve told myself, you know, I’m proud of myself and the hard work I’ve put in. But again, this is just the beginning. It’s a new chapter, and I’m super excited to get going.”

On His Time In Winnipeg

The last year-and-a-half saw William Akio score the second-most club goals of any player, behind only Moses Dyer. Having bagged ten goals in 43 appearances, he’s proven to be a proficient talent who had become a fan favourite at IG Field.

“The last year and a half with Valour has really shaped me into the player I am today,” he says. “I’m grateful for Valour and everything they’ve done for me.”

The club has undergone a lot of ups and downs during his time with the team, leaving last year’s bubbled start in the top position, crashing out of it soon after, and then undergoing a head coach change that nearly resulted in Valour clawing its way back. This season has seen similarly bumps and twists, but William says it has helped add to his resolve. He looks back at Winnipeg with fondness and a deep appreciate for the organization’s belief in him.

“One thing I really enjoyed about the being here in Winnipeg was the trust and the love that I’ve been getting from the club, the coaches, and the players. The second I walked in as a rookie, they welcomed me with open arms. They all see something in me, they said one day I can be a star, help the club, and score goals, and I’ve been doing exactly that. I’ve had so much fun here in Winnipeg. I wouldn’t trade it for anything. It’s been such a good time.”

It should also come to no surprise that his favourite goal scored in Valour colours was ‘that one‘ against Forge, where he dribbled the ball from end-to-end.

“I don’t know what it is about Forge, it’s like a different animal comes out in me. Everybody says those are the goals you score maybe three, four, five times in your career. So, I’ll take that one, for sure. That’s my favourite goal so far.”

On The Joy Of Football

Those who know William Akio describe him as a humble, joyful player capable of looking on the bright side of life. Even after his goal-line gaff made waves around the world, he kept his chin up, addressed the miss, and kept looking straight ahead all the way into the Scottish Premiership. Given the challenges he’s surmounted to get there, one would be forgiven for thinking he could be a little jaded, but that’s just not Willy.

“It’s very, very important to have a balance in your life altogether. For me, I look at everything that’s going on in my life and I just try to add the perfect amount. I don’t like to overthink or over-do soccer more than just relaxing with all friends, talking to my family, or working on my YouTube videos. I weigh everything out and I put it on little balance beam and I focus on everything the way I should,” he says.

It’s when there’s an imbalance, he explains, that the stress fractures comes out. Like many successful athletes before him, he keeps it simple, and he finds happiness in that balance. There’s no better example of this than the past month, where many an athlete would have cracked under a viral influx of negative comments. Not Willy, though.

“Life is very crucial,” he adds, “Who knows what can happen? I can get injured any moment. These things happen every single day, so I just try to stay as humble as I can, and balance everything out as best I can.”

It’s a working philosophy so far.

On Joining His Brother

William Akio isn’t the only Canadian Premier League export to join the Dingwall club this year, with his brother Victor Loturi having already made his debut. For Akio, the chance play alongside family is something they’ve collectively dreamt about since they were kids.

“We used to talk about just this,” he reflects. “one day we’re going to play pro in Europe together. We didn’t know how it would happen, and then it did happen so quickly. We’re very, very emotional. We had no idea it would happen so fast. I look back at all the hard work that my brother and I put in, we dedicated our lives to soccer, and it’s meant for us. This is who we are. This is what we’re meant to do.”

Even during the duo’s time on opposing sides in the Canadian Premier League, their sibling rivalry struck a chord even when they weren’t playing against one another: when Akio scored his first CPL goal, his little brother followed suit in a different match on the same day – he just couldn’t let himself be outdone by his big brother.

Now they’re on the same team, and keen to celebrate with one another.

“I know he’s gonna give me a few assists,” Akio says jovially. “I’m just very excited to actually play with my younger brother. We’re going to live together, so when he’s having his bad days and I’m having my bad days, we’re there to pick eachother up. I think that’s the most important thing.”

A Long, Winding Road To The Pro Game

If it weren’t for the COVID-19 pandemic, Akio’s pathway to professional football likely would have come through the MLS SuperDraft, which in itself was a significant achievement given that he had undergone a long recovery after a serious knee injury sustained in 2019. He stormed back to essentially become a goal-a-game player under UTRGV coach Bryheem Hancock, and had been expected to get picked up in the US draft.

Unfortunately for the striker – but fortunately for Valour FC – his final season with the University of Texas Rio Grande Valley saw the season schedule switched to the spring instead of the fall due to the pandemic, nixing his eligibility for the draft.

While Akio was disappointed to miss out on such an opportunity, it wasn’t long before former Valour head coach Rob Gale reached out to the striker and offered an immediate spot on the roster. Akio, having just completed his psychology degree, had been contemplating doing his Master’s and then trying again for the MLS SuperDraft the following year.

Tempted by the opportunity to take a crack at the pro level, however, he signed with Valour that spring and soon proved he belonged.

Having both been raised in Calgary and having played for Cavalry’s feeder club in the USL2, there was always a question of how Akio landed in Winnipeg rather than the hometown club in which even his brother Victor Loturi player for.

After helping the Calgary Foothills win the PDL Championship in 2018, Akio was told there was no real spot for him in the Cavalry setup for the inaugural CPL season. Given that he had a scholarship opportunity in Texas, he opted to continue his education while playing NCAA Division I football. He did just that, all the while becoming the first in his family to obtain a college degree.

After the ceremony, however, his hometown club still hesitated on offering him a contract, even after his explosive form in NCAA: they’d rather have him come in and trial for a possible roster spot. Instead, it was Valour who came in with a concrete offer, and so that’s where he went.

The latest Ross County recruit has some 30,000 followers on his YouTube channel, where he provides a personal, intimate look at his journey as a footballer and his pathway to the professional game. Wherever Akio goes, his camera follows, and this will continue during his time in the Scottish Premiership.

“They were very open about it,” he said of his new club. “They said as long as I’m respectful within the guidelines and protocols, I can do it. So, I’ll give you guys the best inside scoops I can, and hopefully some nice behind the scenes against Celtic or Rangers. I’m excited to share this with you. I’ve been documenting my whole life, and I’m going to continue to do it my entire career.”

It’s been quite a summer transfer window for Canada’s four-year-old domestic league, which saw Diyaeddine Abzi land in France and Akio’s brother land ahead of him in Scotland. With Akio now a figurative flagbearer for the Canadian Premier League, he isn’t worried about the pressures that come with representing the growing domestic game here. For him, it’s all a net positive:

“It’s gonna put this league on a pedestal, and I hope in the next 5-10 years that the CPL grows to be like MLS. It’s big, and hopefully we will have 15-16 teams by that time and it only keeps growing. I feel like my move, and everyone else’s moves, they’re very important for them in terms of growth. They’re gonna make Canadian soccer a lot bigger than what it is right now, for sure.”

Has Akio Hit The Top?

No, not yet. His new club Ross County firmly believes that he’s got plenty of room to grow, and so does Akio.

“For me, I truly believe that I’ll never know everything and I’ll never necessarily be at the top, it’ll just be the next level, and the next level, and the next level. However high I go, it will just be another stepping stone for me. I’d like to just keep myself grounded, because at the end of the day this sport is not forever. Like I said, life is very crucial. We’ve got to enjoy the moment and keep working hard. For me, this is just another level. After that, another level. That’s just the way I look at things.”

Akio has signed with Ross County FC on a three-year deal.