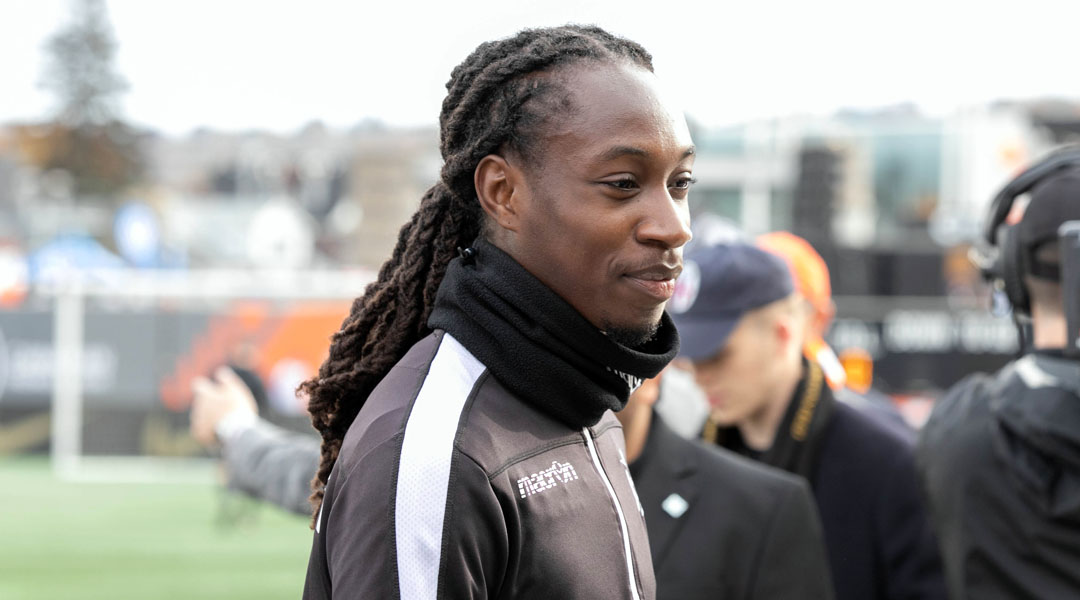 Former Forge FC forward Kadell Thomas appears to have returned to Sigma FC after the reigning CPL champions opted not to renew his contract for the 2021 Canadian Premier League season.

Before jumping up to the Canadian Premier League level alongside several Sigma products in 2019, Thomas had joined the Sigma FC academy at the age of 15 before debuting for the club’s League1 Ontario side in 2014. He went on to make 44 appearances at the semi-professional level, contributing 21 goals.

After following Bobby Smyrniotis to Forge FC, the 24-year-old made 32 appearances for the hammers throughout both of its title winning seasons, where he recorded two assists and three goals – one of which was the first-ever for Forge, and another which was labelled as one of the best goals seen in the burgeoning professional league:

While the club retained most of its core roster ahead of the 2021 CPL season, Kadell Thomas did not re-sign with the side. Yesterday, the North York-born athlete featured in a friendly for Sigma FC, scoring a brace as the League1 Ontario side finished well on top of North Mississauga SC.

Joining Kadell on the scoresheet was Simon Triantafillou (Syracuse University) and Ivan Nikolic (University of Akron), with the side enjoying what appeared to be a comfortable 4-0 scoreline. Goalkeeper Corey Marques kept a clean sheet for the side. Thomas was named the Player of the Match by Sigma FC.

The match also saw League1 Ontario veteran Kyle Walton return to the pitch for Sigma, with the Canadian defender having previously trialed with York9 FC (now York United) and Atletico Ottawa over the past two seasons. He looked a likely candidate to step up to the CPL level last year before an injury ended his trial with Atletico Ottawa prematurely.

Forge FC currently has 24 players on the books right now, with the league’s maximum roster size still listed at 23 – though it should be noted Omar Browne has not arrived on loan as of yet. With Sigma duo Santiago Frias and Robbie Cleary in the bubble on developmental contracts, they are expected to depart before the academic season begins.

Valour FC head coach Rob Gale had also suggested there is additional roster flexibility for U SPORTS athletes this year, which leaves a gray area of roster flexibility for the side to feature more than the oft-named 23 man roster size. At the moment, however, it appears Kadell himself has landed outside of that.

He isn’t the only two-year Forge forward to have moved on, with Marcel Zajac signing for Polish side ZKS Olimpia Elblag after a short stint with Watra Bialka Tatrzanska, and Anthony Novak having signed with Cavalry FC following a brief stint with Clube Condeixa.

The 2021 League1 Ontario season is expected to start on July 29, with Ontario having recently announced that it would be entering the third and final step of its reopening plan at the end of this week.