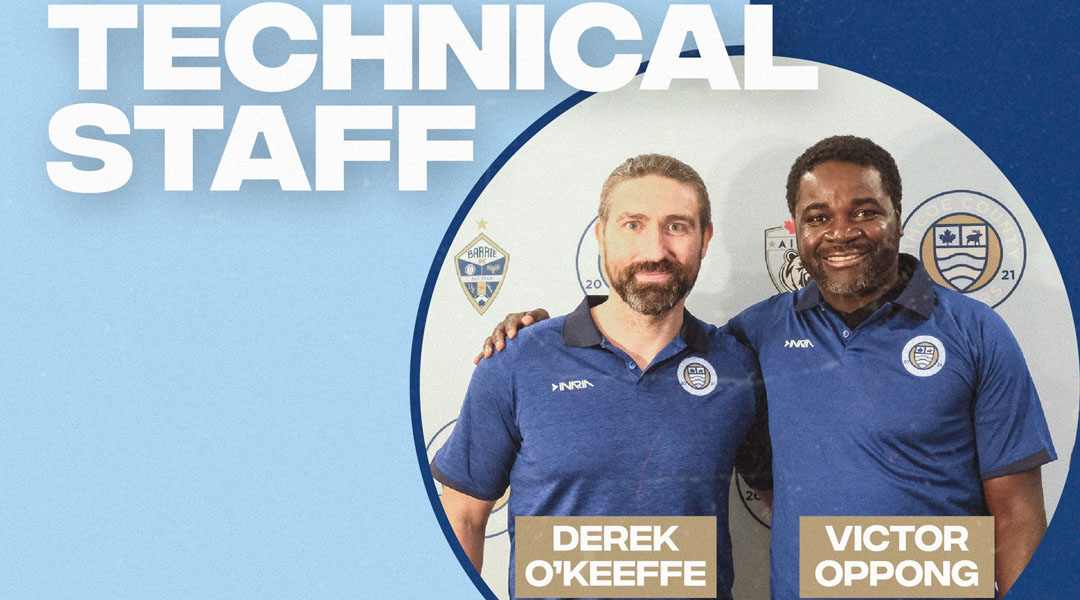 The Simcoe County Rovers is continuing its string of ambitious moves with the staff hirings of Victor Oppong and Derek O’Keeffe.

Victor Oppong joins the side as its general manager and inaugural head coach, with the former Ottawa Fury assistant coach arriving as a familiar face for Club President Julian de Guzman. Prior to the duo’s time in the nation’s capital, he was part of the national team youth setup and had captained Les Rouges at the U-20 World Cup 2001.

Victor brings tremendous knowledge of the game to our club. He is a great addition to the County’s soccer culture and the region should thrive off his leadership. I have had the pleasure of playing with Victor in the U-20 World Cup in Argentina and working with him as a coach with the Ottawa Fury in the USL Championship. We are excited to bring in such an experienced leader to the club.

Oppong spent the majority of his playing career in Germany, playing for the likes of FC Saarbrucken, Waldhof Mannheim, and Vfr Mannheim. It was there where he first transitioned into coaching with TSV Amicitia Vierheim and Ziegelhausen, obtaining his UEFA licenses before returning home to join the Ottawa Fury.

Joining him in the technical box will be Derek O’Keeffe, who holds a UEFA A coaching license and most recently held a head coach role with League1 Ontario side Aurora FC, where he helped develop CPL talent like Morey Doner and Max Ferrari. He will don the role of assistant coach at the Simcoe County Rovers.

It was in Derek’s home country, Ireland, where his coaching journey first started: his first taste of management came in the League of Ireland before a move to North America saw him have a stint as a member of the New York Red Bulls technical staff. He has also coached the Vaughan U-17 boy’s side and the Kleinburg Nobleton U-15 girl’s side at the OPDL level.

Derek is a remarkable professional and a critical addition to the club. He has a high-quality background in League1 Ontario and has an intimate understanding of Ontario soccer. He has a proven ability to develop players.

The Simcoe County Rovers were founded by Peter Raco and Julian de Guzman, who announced the new club in July after the pair had gone separate ways from 1812 FC founder Andrew Weilgus.

The club has since announced Canadian national team striker Cyle Larin as a co-owner, with additional investors – including real estate investor Kosi Stobbs – set to be revealed in the near future.

The Simcoe County Rovers are expected to apply to join League1 Ontario for the 2022 season, where it will play from JC Massie Field on Barrie’s Georgian College campus. The team has already been accepted into the Huronia District Soccer Association, and has formalized youth partnerships with Aurora FC, Athlete Institute FC, and the Barrie Soccer Club.

The additions of Victor Oppong and Derek O’Keeffe represent a highly ambitious start for the prospective League1 Ontario side, and with backers like Cyle Larin and Julian de Guzman, it’s looking like the Simcoe County Rovers will be a team to watch come 2022 and beyond.