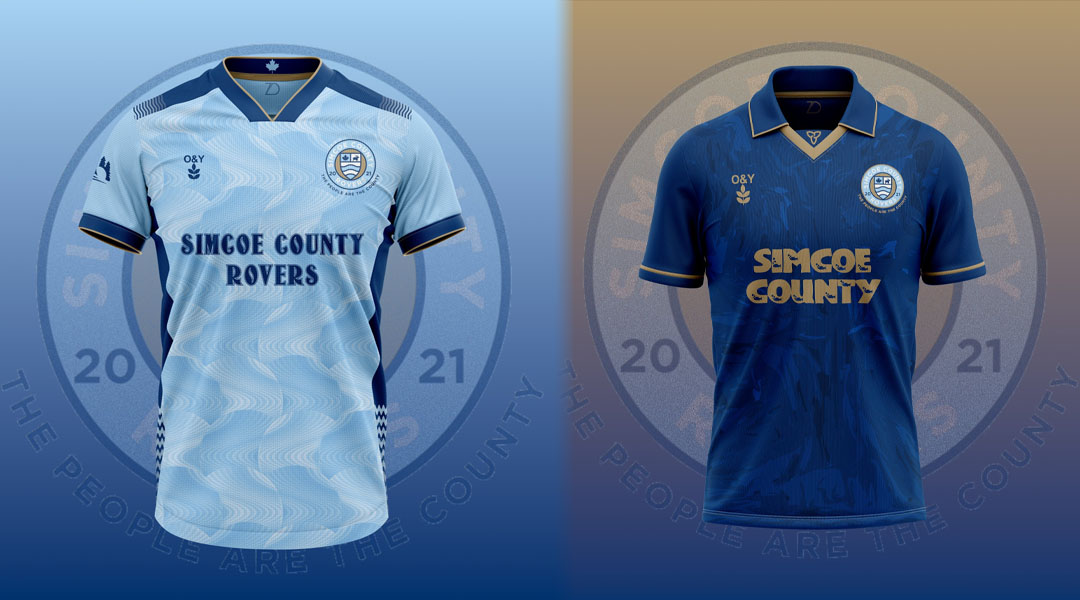 Prospective League1 Ontario side Simcoe County Rovers has received a nice kit concept design courtesy of South African designer Zephyros Designs, who has no affiliation with the club but evidently enjoys the idea of a well-thought-out kit.

If the name sounds familiar, that’s because the designer recently made concept kits for Peterborough-based club Electric City FC a few weeks ago.

Zephyros Designs took a crack at both the home and away looks for the fledgling club, which relies heavily on a colour set that includes Simcoe Blue, Royal Blue, and Victory Gold with a design emphasis on the waterways of Simcoe County.

Without further ado, here’s what Zephyros had in mind for the team’s home kit:

The conceptual Olive & York kits feature a sleek light blue with sharp dark blue accents, and Zephyros even incorporated the maple leaf from the Simcoe County Rovers badge onto the rear collar.

The subtle wave pattern feels right at home with the Simcoe County Rovers, and it’s a look that wouldn’t be a first in Canadian football circles: east coast side Halifax Wanderers featured a geometric form of this idea in its inaugural away kit before transitioning to sound-waves on its 2020 home kit.

Here’s what Zephyros had in mind for the away look, which sports a collar:

Away jersey next for @SimcoeRoversFC

Continuing the nature theme, a royal blue jersey with gold accents, sporting an abstract tree pattern with a number set inspired by the residents of the rivers around the county. The @olive_york logo fits in perfectly with the nature theme pic.twitter.com/kLfeYdJNHq

Here the Victory Gold plays nicely off of a bold deep blue look, with the pattern now shifting to a more abstract tree design while the back of the kit features a fairly classical interpretation of a nautical rover. All-told, the blue-and-gold design pulls off quite a sharp look.

The Simcoe County Rovers are expected to apply to League1 Ontario to participate in the 2022 season, and have partnered with the Barrie Soccer Club, Aurora Youth Soccer Club, and the Athletic Institute in Orangeville. The club recently donated 75 tickets to its youth affiliates for an upcoming national team match.

It is expected that the arrival of Simcoe County Rovers will kickstart a fierce League1 Ontario derby with 1812 FC Barrie. Raco and de Guzman split from that club’s ownership group prior to its launch, and have now formed their own team in the same region. 1812 FC Barrie recently unveiled its own inaugural kits in partnership with the Downie Wenjack Fund.

The Simcoe County Rovers are expected to announce additional investors of its own over the coming months, though there is still much to be revealed about the club itself.