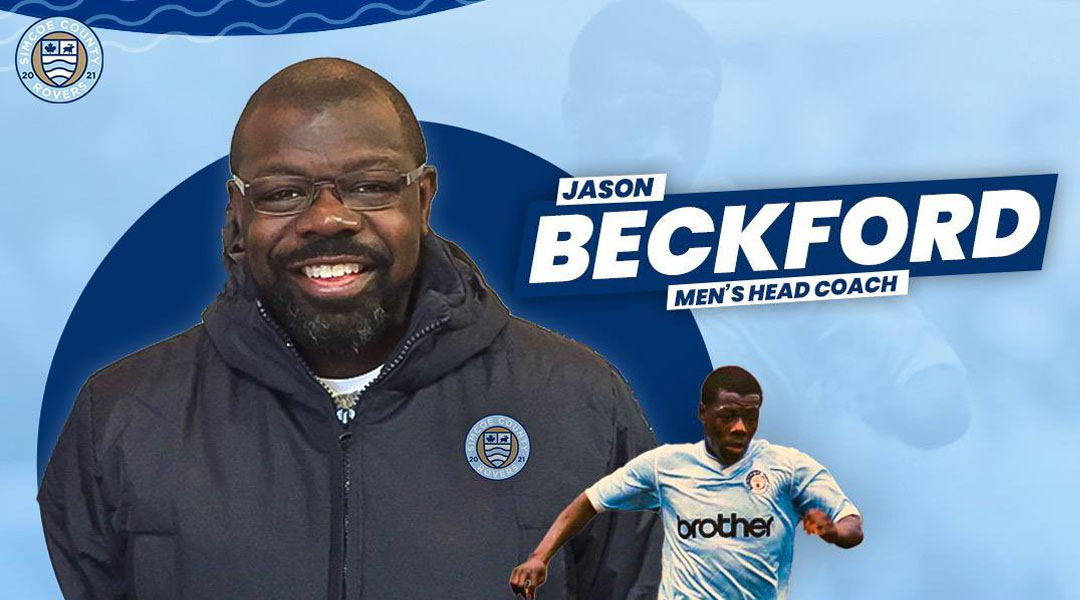 The Simcoe County Rovers have named former Manchester City footballer Jason Beckford as the head coach of its men’s team.

The 52-year-old will arrive to JC Massie Field with a lot of expectation ahead of the club’s inaugural season. The Barrie-based side is striving to be a top side at League1 Ontario level before it potentially jumps upwards into the Canadian Premier League in the next few years.

Beckford’s work with the side will begin immediately, with the Englishman set to help establish an attacking identity ahead of the 2022 League1 Ontario season. The expansion side had previously named Victor Oppong as its inaugural head coach, but confirmed that the former Ottawa Fury man was unable to join the team due to family commitments.

The new gaffer’s first steps into coaching came in his native England through the Manchester City and Bolton Wanderers academies. He then spent spent five seasons as the head coach of non-league side Mossley Football Club, where he led the team to two promotions.

After immigrating to Canada ten years ago, Beckford has held technical director positions with both the Newmarket and Kleinburg Nobleton soccer club, and also held a head coach role with the Vaughan Soccer Club before consulting with the Durham Region Soccer Association. He owns his own player and club development service, and arrives to the Rovers with a UEFA A License.

Suffice to say, he’s a head coach who will be expected to bring the best out of the club’s inaugural roster.

His own playing career began when he turned professional with Manchester City back in 1987, with a young Beckford getting his first minutes as the club won promotion to the first division one season later. Loan moves to Blackburn Rovers and Port Vale followed before he transferred to Birmingham City for a £150,000 fee.

His time at St Andrew’s Stadium was marred by continued struggles with a knee injury that limited his input over the next three campaigns. A short loan to Bury would precede moves to Stoke City, Millwall, and Northampton Town before he retired at the age of 26 due to his knee injuries.

Beckford is now helping grow the game in Canada, and already has quite a playing roster to work with in Barrie: the club’s attacking line already includes league all-stars Reshon Phillip and Leaford Allen, with former Atletico Ottawa forward Shawn-Claud Lawson recently joining the team.

The defensive end also includes Jarred Phillips and Alain Sargeant, with several of the club’s other signings suggesting that the Simcoe County Rovers are aiming to replicate the immediate success shown by Guelph United last year.

“We’re doing our due diligence and really making sure every stone has been turned over,” said Club President Julian de Guzman of the club’s roster, “and now we’re diving into the midfield area as well. For our frontline, with the names we’ve signed, that almost completes an all-star, super team League1 Ontario frontline – but then you want to have a strong midfield as well, with a strong backline and a goalkeeper behind that.”

The Simcoe County Rovers have also impressed off the pitch, where a leadership group including national team players Cyle Larin, Doniel Henry, and Janine Beckie has already assembled.

With Jason Beckford at the helm, the Barrie-based club has secured another sharp-looking addition ahead of its inaugural season – though whether success translates from the paper to the pitch remains to be seen.