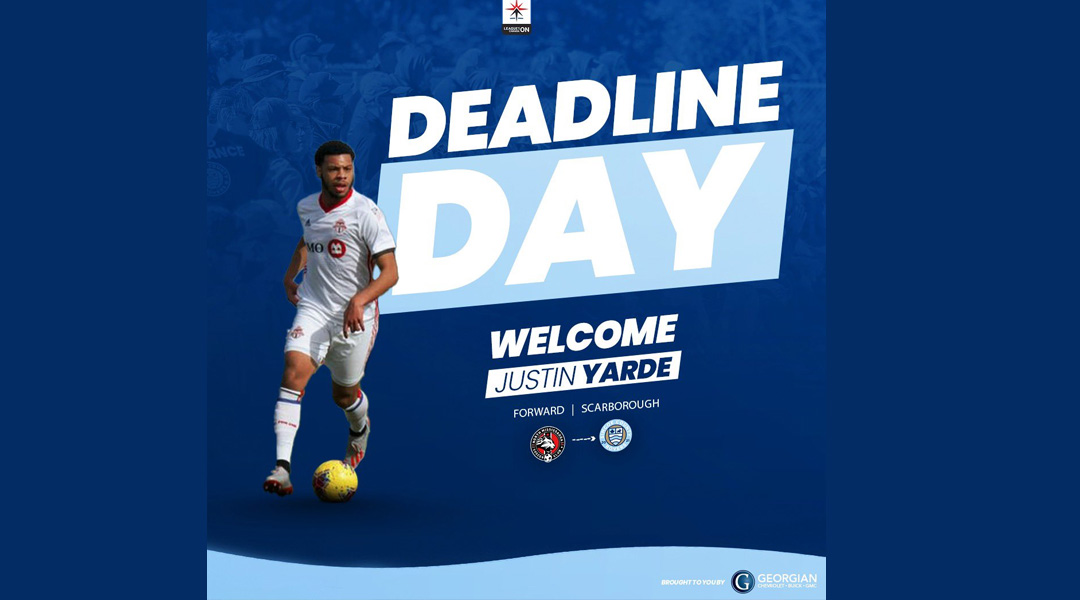 The former Toronto FC Academy prospect arrives as a winger who has already found goals in the league this season, having tallied two goals from his seven North Mississauga SC appearances.

The 21-year-old winger may be young, but he’s already accrued some League1 Ontario experience through his time with North Mississauga FC and Alliance United, while having also trained with Toronto Skillz FC during the pandemic-nixed 2020 campaign.

Prior to that, the youngster helped Team Ontario to a gold medal at the 2017 Canada Games while en route to some youth national team camps, too.

Like former Atletico Ottawa defender Brandon John, Yarde also spent time developing outside of the country in Orlando. Having joined Montverde Academy for 2019, the then-17-year-old even earned a U-20 national team training opportunity that saw him crack the Concacaf U-20 Championship squad.

The following season saw the six-foot-one forward return home to sign with Ontario Tech University, though the pandemic would nix his first season and an injury would see him miss his second.

Yarde had been eligible for the 2022 CPL-U SPORTS Draft, though the student-athlete was passed over after being sidelined for two seasons. It’s fair to say the winger has bounced back well, however, with his North Mississauga SC form evidently attracting enough interest from the Rovers to secure a midseason switch.

Given that North Mississauga SC hosts at least nine Ontario Ridgebacks athletes – including former CPL draft picks Christopher Campoli and Danial Rafisamii – his move certainly comes as an interesting one.

Now back on the pitch and in the midst of a promising campaign, he joins a Simcoe County Rovers side that currently rests four points off the top in fifth place, while his former side is in thirteenth.

The Rovers have recruited high-profile talent in the likes of Shawn-Claud Lawson and several League1 Ontario all-stars, with former TFC prospect Ethan Beckford currently on pace to bag one goal per game.

How Yarde fits into the system put in place by former Manchester City footballer Jason Beckford remains to be seen, but his move is certainly an interesting one for those who follow League1 Ontario closely.