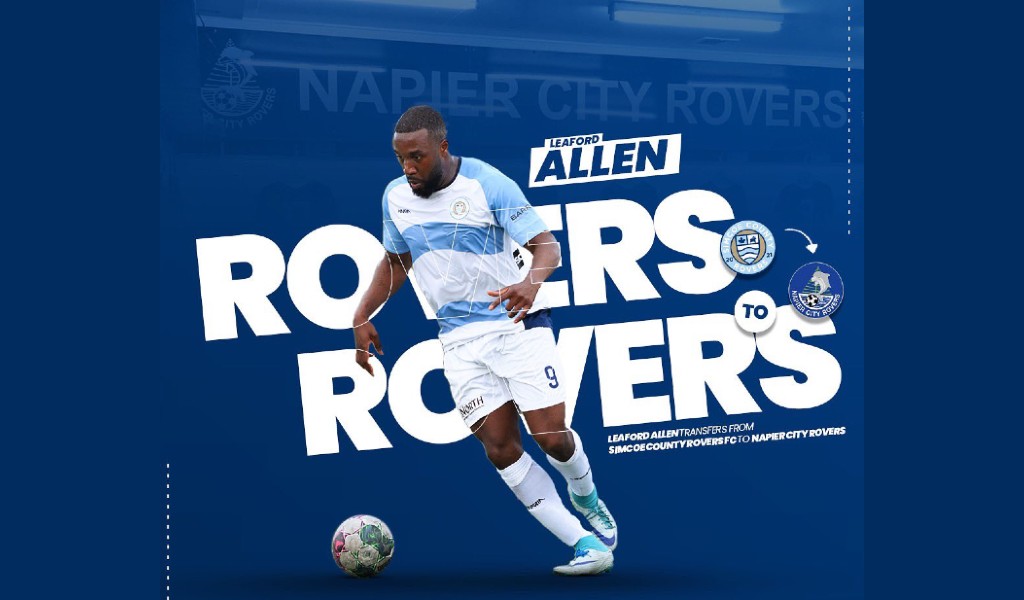 The League1 Ontario phenom made history as the first-ever Simcoe County Rovers signing, duly delivering with two goals in his first three games for the newly-minted side before this weekend’s transfer news.

“An objective of Rovers FC is to offer local players a platform to showcase their abilities and help promote the players to to professional environment, not only in Canada but across the world,” said Rovers General Manager Ali Sozeri, “it’s very rewarding for us to see our vision become a reality in such a short time frame.”

Allen now departs as one of the most highly-rated and consistent goalscorers in League1 Ontario history, with the Brampton-born striker having made waves through his time with ProStars FC, Sigma FC, Blue Devils FC, and the Simcoe County Rovers, earning four MVP awards along the way.

This won’t mark his first time playing abaroad, with Leaford having finished as the top goalscorer for Swedish fourth tier side Tenhults IF in 2017 before landing with Nassjo FF the following year, where he procured 19 goals in 27 matches.

While his time in Barrie was shorter than the club had likely imagined, they’re pleased to see the striker progress to another opportunity overseas.

“We are proud of Leaford Allen earning this opportunity to make a transfer to the New Zealand Central League,” concluded Sozeri, “we wish Leaford much success and have no doubt that he will continue to score goals and contribute to the success of his new club Napier City Rovers.”

Last season saw Allen bag ten goals in just as many games for Blue Devils FC, where a playoff brace against Vaughan Azzurri led the team to a championship final against Guelph United.

The striker has also been prolific in collegiate football, scoring more goals than appearances for the Humber Hawks. The team picked up two provincial championships following his arrival, with Allen being decorated as an OCAA First Team All-Canadian en route to an OCAA Men’s Soccer Player of the Year award.

The Simcoe County Rovers still have plenty of goalscoring talent on the books, with the club having recruited former Atletico Ottawa forward Shawn-Claud Lawson and League1 Ontario all-star Reshon Phillip, who have already combined for five goals in just as many games.

The Barrie-based side has opened up its inaugural campaign with three wins, one loss, and one tie, putting the team fourth on the league table with two games in hand over shock table leaders North Toronto Nitros.