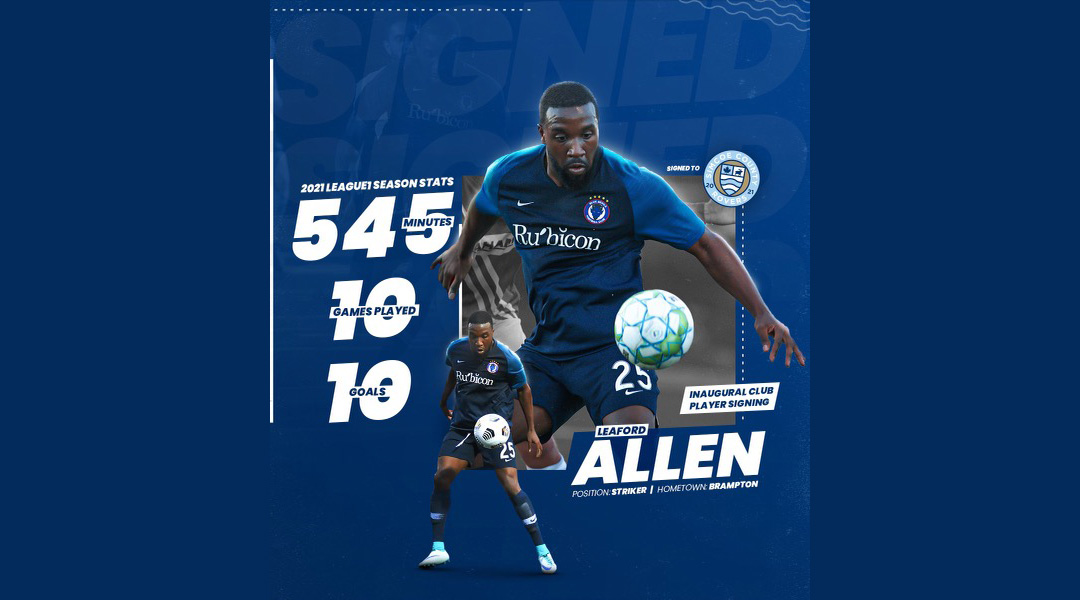 His arrival means that the Barrie-based club has secured one of the league’s most consistent top performers, with Leaford procuring over forty goals in the semi-professional division since first entering with the ProStars in 2015.

We’re delighted to bring in the league’s perennial top attacker. Leaford displays all the qualities we’re looking for in an attacker and a leader on the field. The pedigree he brings is second to none at the League1 Ontario level.

Known well within Ontario soccer circles as a consistent goalscorer with a great blend of physicality and skill on the ball, the Brampton-born striker has made waves in League1 Ontario through his time with ProStars FC, Sigma FC, and Blue Devils FC.

Allen – who has earned four all-star nominations and a League1 Ontario MVP award – also spent two seasons abroad, signing with Swedish fourth tier side Tenhults IF in 2017 and finishing as the club’s top goalscorer with twelve goals in eighteen matches. The following year saw him land with Nassjo FF, where he bagged nineteen goals in 27 games to finish as the third-highest scorer in the league.

Allen scored ten goals in ten games last for Blue Devils FC last season, helping the side reach the final by bagging a brace against Vaughan Azzurri in the playoffs. Guelph United won the championship match despite a late goal from the big striker.

The Brampton attacker has also proven to be quick prolific with the Humber Hawks, scoring more goals than appearances throughout his collegiate career. The Hawks picked up two provincial championships following his arrival, the last of which came in 2021.

With Allen playing big roles in both campaigns and tying the Hawks team record for postseason goals, he was also decorated as an OCAA First Team All-Canadian en route to an OCAA Men’s Soccer Player of the Year award.

The Simcoe County Rovers are expected to build an ambitious team for their inaugural campaign, with the expansion side being backed by current national team members Doneil Henry and Cyle Larin, who joined a already-impressive ownership group featuring Julian de Guzman, Will Devellis, and Peter Raco.

Former Ottawa Fury assistant coach Victor Oppong will lead the side for its inaugural 2022 League1 Ontario campaign, with former Aurora FC coach Derek O’Keeffe assisting him in the technical area.

The club is expected to play from JC Massie Field at Georgian College, though its home ground is yet to be formally unveiled. Details on the 2022 League1 Ontario season and the bulk of the inaugural Rovers squad are still to come.

The Simcoe County Rovers won’t be the only expansion side taking its first steps this year, with Peterborough’s Electric City FC also set to join alongside the return of Pickering FC.