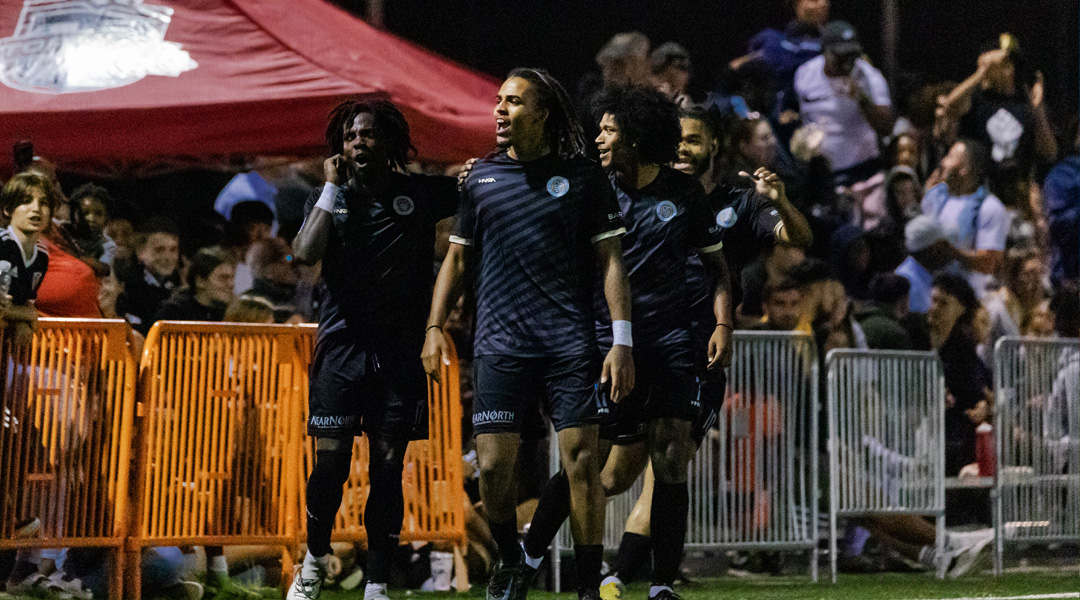 The Simcoe County Rovers weren’t satisfied with just reaching the postseason stage for the club’s inaugural League1 Ontario season: they’ve put themselves ninety minutes away from the final.

Last night saw the Barrie-based expansion team secure a two-nil victory over a North Toronto Nitros side that had proved to be a surprise title contender, with neither side giving away anything easily on what proved to be a fiery affair at Downsview Park.

Both teams exchanged blows in the opening minutes, with the home team buoyed on by a crowd that seemed to have filled nearly every spot in the rafters. The North Toronto Nitros probed mainly down the wings, while the Rovers hit back with a good opportunity through Tre Cosby.

With three yellow cards handed out by referee Brian Butler before the first half whistle, the fiery atmosphere only built up as the visitors probed: fast-footed forward Ethan Beckford nearly put the Rovers up, with Justin Earle following up with a chance of his own shortly after.

The Nitros nearly put themselves ahead fifteen minutes of time, with a close-range opportunity going begging on the opposite end of the pitch after a big stop from former Atletico Ottawa goalkeeper Ricky Gomes.

A tactical change from Rovers head coach Jason Beckford saw former Wanderers trialist Ryley Wishart enter the match, and it proved to be a great move from the gaffer: just a few minutes after coming on, the forward headed home a corner kick from Shawn-Claud Lawson to put the visitors in front, with Wishart seeming to enjoy the rowdy home fans giving him an earful.

The Rovers have consistently proven to be a team that strikes it’s killing blows in the late stage, and that proved to be the case tonight: Ethan Beckford – who had nearly scored an incredulous chip earlier in the match – struck a fine finish at the end of a solo run to put the visitors up by two, all but guaranteeing the Barrie-based expansion team a spot in the semi-final.

With the full-time whistle coming not long after that, a hard-fought two-nil victory for the Rovers was confirmed. Who the expansion club will face next remains to be seen, though they won’t have long to prepare: the semi-final stage will take place this weekend.

“We had clear objectives for both sides,” said Club President Julian de Guzman after the match, who was quick to point out that both the club’s men’s and women’s teams had reached playoffs. “We obviously want to perform well and develop players at the same time, but to achieve something like making the playoffs is a sensational job.”

The former national team midfielder plauded his squad’s growth over the course of the season, with players showing firm belief in one another as the Rovers found their footing and planted their own flag on the highly competitive pro-am league.

“This is exactly where we want to be,” added de Guzman. “We’re quite pleased with everything. We’ve been improving a lot as we move on, and it’s really great to see the product proving itself at home and on the road as well. It shows what this could be coming down the road, if we go in that professional direction.”

The Simcoe County Rovers haven’t shied away from their aspirations to launch as a Canadian Premier League club, with the tread having turned many heads for its ambitious roster build ahead of its inaugural campaign. The club saw striker Leaford Allen and assistant coach Derek O’Keeffe depart for new opportunities as the year progressed, and that’s something De Guzman says that fans will grow some familiarity with.

“We want to create a stepping stone, a platform for players and coaches to be in a professional environment, even though it’s in a semi-pro league. Carrying yourself as a professional is one of the hardest things to do when you’re not pro or haven’t ever signed a pro deal, but that’s kind of the tool I’ve been able to use as a young kid – acting as a pro before becoming pro. That’s what the philosophy has been for this group.”

The club has confirmed that it has been contacted by multiple CPL teams regarding some of its players, though it kept coy on who for now. Ethan Beckford has certainly turned heads with his prolific form, but so have several others in a squad that has some great professional experience amongst them.

Any player departures aren’t expected until after the season concludes, however. For now, the club will set focus on its semi-final matchup that will take place in just a matter of days

“We have such good momentum behind us. It’s down to the guys: we just need to make sure we come in sharp and carry this momentum into the next match whether we play Vaughan or the Blue Devils,” concluded de Guzman. “The players don’t care who we face against. Right now, the confidence is there.”