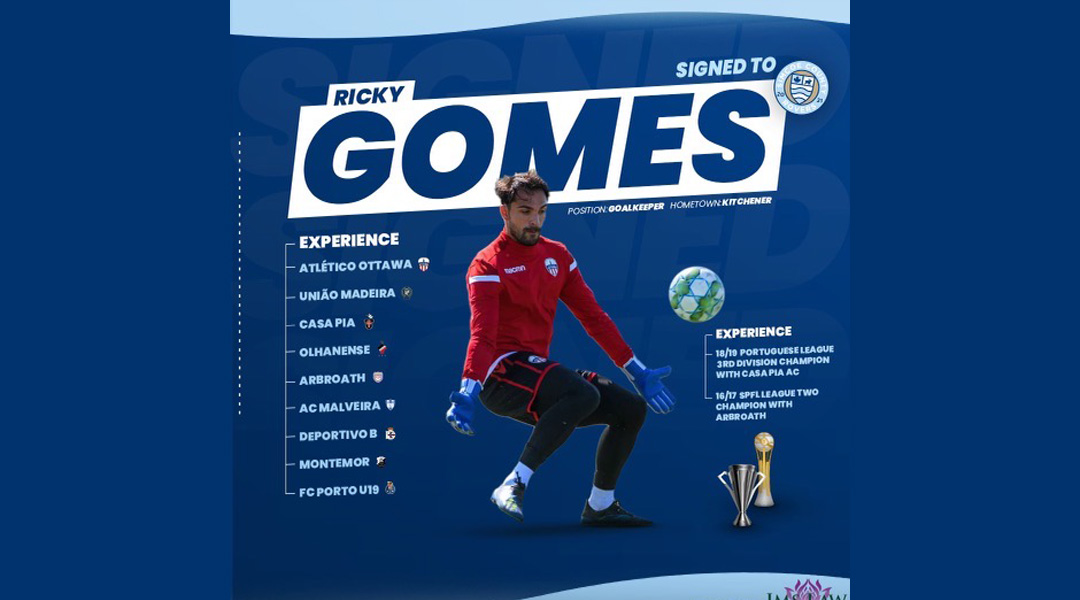 Gomes, 28, arrives with plenty of European experience to his name: prior to launching his professional career, he spent time with the youth teams of clubs like FC Portio, Vitoria Setubal, and Gondomar Sport Club, and his since played for Portuguese sides SC Mirandela and Uniao Montemo, Scottish side Arbroath FC, and Spanish fourth division side Deportivo la Coruna B.

The Kitchener-born athlete most recently plied his trade with Atletico Ottawa, travelling with the side for its inaugural campaign at The Island Games before departing later that year. Having rode the bench behind Nacho Zabal, he stated that his dreams of a homecoming match in Canada would have to wait. With today’s announcement, the long-awaited moment is finally closing in.

Gomes has been training with the squad for some time now, and even featured in the club’s preseason friendly against the Halifax Wanderers.

“Ricky’s singing is a huge boost to the squad not only for his playing ability, but also for his leadership qualities within the locker room,” said head coach Jason Beckford. “He already has the respect of his teammates due to his playing background and the way that he interacts with them in training and on match days, so I am sure they will be as delighted as Ricky that his paperwork has finally been completed.”

Gomes joins a growing number of former Atletico Ottawa players at the Barrie-based League1 Ontario side, with Shawn-Claud Lawson and Jarred Phillips also in the group. With the ambitious expansion club having also recruited players like League1 Ontario all-stars Leaford Allen and Reshon Phillip, the team is expected to climb up the rankings as the season progresses.

The Rovers had used Daniel Buckley for its first two opening matches, with Guelph Gryphons shotstopper Ryan Collins filling in against Alliance United last weekend. The inaugural Rovers campaign sees the club off to a 1-1-1 start as the new team finds its footing.

“I’m excited to join this new club,” added Gomes. “I hope I an help inspire the youth in the area to play soccer and follow their dreams.”

The 28-year-old added that the club’s high-profile ownership group was another factor in his arrival, with the likes of Atiba Hutchinson, Doniel Henry, Cyle Larin, and Julian De Guzman all proving to be a big draw for the goalkeeper.