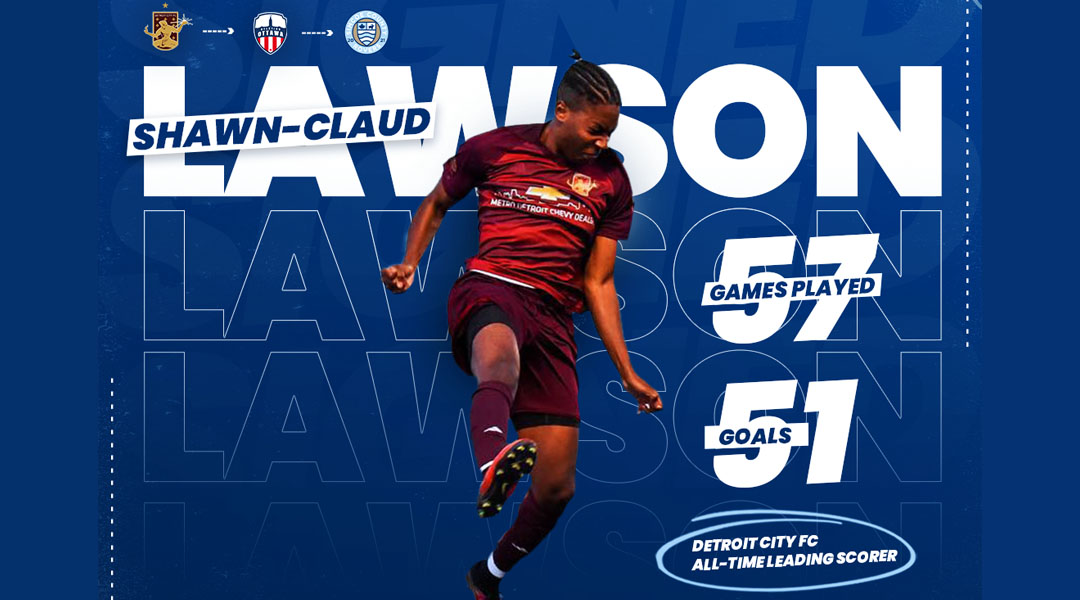 The 28-year-old arrives to the League1 Ontario expansion side after spending the last season with Atletico Ottawa, prior to which he had established himself as Detroit City FC’s all-time leading goalscorer with 51 goals.

“He’s a super striker based on his ability and the qualities that he’s proven to have in the NISA league,” says Club President Julian de Guzman, “there’s not many Canadians who have done that through North America, and we’re excited to have him come on board to really show his ability and talent.”

The marquee signing – who featured for Jamaica at the U-17 level and won a NISA Independent Cup in 2020 – joins a front line that already boasts League1 Ontario all-stars Leaford Allen and Reshon Phillip, who scored 23 goals between the two in the last season alone. With Detroit City FC’s all-time top goalscorer now set to join them, fans who attend games at JC Massie Field can expect to see plenty of fireworks on the pitch.

The League1 Ontario expansion side has been making waves with its professional aspirations and the assembly of a high-profile ownership group, with Julian de Guzman working diligently to assemble a team that, thus far, looks well on course to offer a good show to spectators who give the new club a chance.

“It shows what we want to do for League1 Ontario with the Rovers. It’s important that we bring in players that add experience and value to teach the younger ones, and Shawn-Claud is exactly that,” he adds, “the profile of the strikers around him suits him very well.”

The club notes that Lawson can also be deployed on the wing or even as a false nine, giving head coach the coaching staff plenty of options when it comes the former Atletico Ottawa forward. He and Julian are already familiar with Lawson, who impressed during a training stint with the Ottawa Fury back in 2018.

“He has that versatile factor that really helps a lot whether you play in a 4-4-2 or with three at the front. He’s proven to get the job done, and I’ve seen it too. Based on his time with Detroit, he’s scored a lot of goals as a number nine, sometimes higher up, or even as winger. He is always a danger.”

The Scarborough-born striker spent his youth career developing both in the Netherlands with Feyenoord FC Academy before returning to Canada with the Ajax Soccer Club, where he hoisted the 2011 Ontario Cup and a Canadian National Club Championship. His next steps with Oakland University saw him play in both midfield and forward positions alongside Austin Ricci, with Lawson helping his team land the Horizon League Championship twice whilst undergoing his prolific career with Detroit City.

Lawson won’t be the only former Atletico Ottawa athlete in the team, with longtime League1 Ontario favourite Jarred Phillips also inking a deal with the expansion side. With the likes of Jadon Vilfort, Tristian Gayle, and Alain Sargeant padding the defensive ranks as well, it’s not just the front line that is turning out to be a head-turner.

The side has also added former 1812 FC forward Jonny Amoo, who saw a healthy eight goal return last season which included a hat-trick against Woodbridge.

“We’re doing our due diligence and really making sure every stone has been turned over,” explains de Guzman, “and now we’re diving into the midfield area as well. For our frontline, with the names we’ve signed, that almost completes an all-star, super team League1 Ontario frontline – but then you want to have a strong midfield as well, with a strong backline and a goalkeeper behind that.”

The Barrie-based club is now just a few months removed from the inaugural season for both its men’s and women’s teams, who are expected to begin preseason in a couple of weeks. The Rovers expect to have over three-quarters of its roster completed at that point, with co-owner Peter Raco hinting that there are more head-turning roster additions in the works.

“We’ll continue to announce significant additions to our roster leading up to March’s pre-season camp. Over the past year we’ve evaluated hundreds of Canadian footballers to assemble what should ultimately be considered the most prolific group ever assembled in League1 Ontario” added Raco.

For Julian, assembling such a high-profile roster is all about delivering a memorable sports experience to a city that simply hasn’t had the opportunity to enjoy such a thing in its own backyard before.

“We’re coming into a new region, we’re coming to a new environment that has never seen this game at a high performance level before. They deserve the best, so why not give them the best? And that’s exactly what we want to do.”