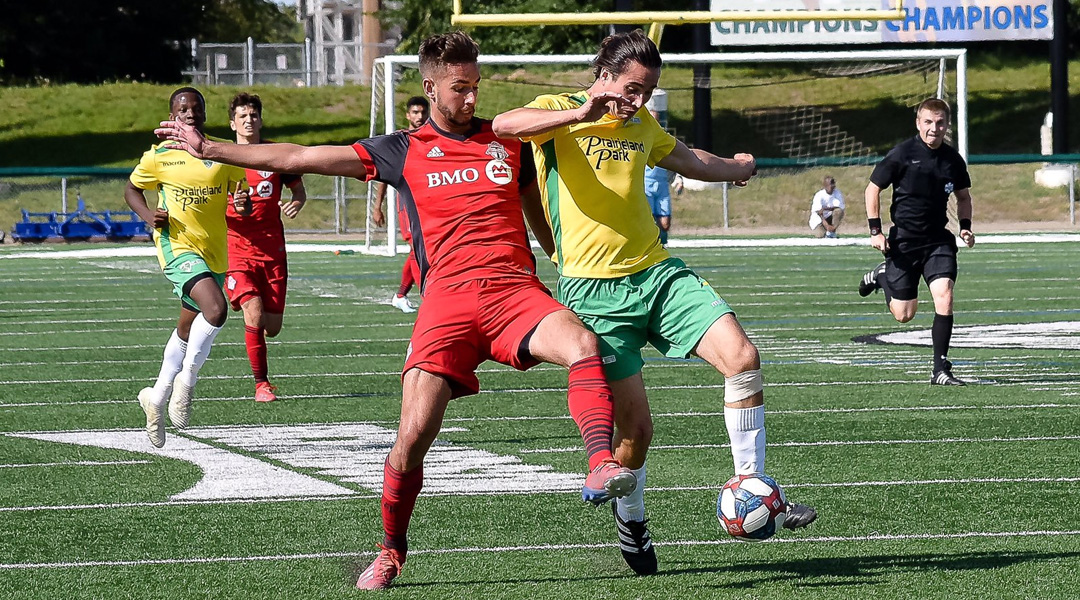 The final match of this year’s SK Summer Soccer Series pit the SK Selects against Toronto FC II, with over 3,000 fans attending the litmus test to see if Saskatoon can bring in enough numbers to support a Canadian Premier League expansion team.

The SK Selects finished the three-game exhibition series on a high note, coming out 2-0 winners after goals from Kelowna-born James Fraser and Saskatoon’s own Nikolas Baikas. Like many of the SK Selects, the duo also play for their respective University teams, and will return to U SPORTS action until the SK Summer Soccer Series kicks off again in 2020.

The SK Selects had recently brought in York9 FC CPL-U SPORTS draft pick Daniel Pritchard, a former Calgary Foothills player who didn’t end up making the jump to the Canadian Premier League. If Joe Belan’s ownership group has its way, Pritchard may have another pathway to a professional sporting career.

The Toronto FC II lineup was rotated for the exhibition match, with plenty of youngsters and even former Juventus Academy product Alessandro Busti making the trip to SMF Field to represent the Reds. All-told, it was a boisterous atmosphere indicative that the province appears hungry for a professional football club.

Fans who purchased a ticket to the exhibition match also got free access to the Saskatoon Ex, which included a demolition derby in the afternoon. Toronto FC has had similar promotions with the CNE, so the double-header promotion could be a mainstay in future years, though whether it comes from the SK Summer Soccer Series or a full-fledged CPL expansion team remains to be seen. Prairieland is, the ownership group confirms, the primary choice of location for a prospective CPL club.

To that end, Joe Belan’s ownership group has no set time limit when it comes to transitioning from a series of exhibition games to a professional football club. They’re going to analyze what worked and what didn’t from the inaugural series, make adjustments, and see the results of these changes. If they’re happy with what they see, the group will then move on to the next step. Otherwise, it’s back to the drawing board.


With 3,016 fans attending the closing match and over 3,000 attending the opener, it’s looking like Saskatoon has a fairly engaged fanbase. Based on those numbers alone, it would put the prospective CPL club ahead of York9 FC in terms of attendance, and within ballpark range of FC Edmonton and Pacific FC – and that’s without the allure of being a professional club right now.

Canadian Premier League commissioner David Clanachan said that he’d be happy with a single expansion team for 2020, though he mentioned that three or four ownership groups had made significant progress compared to the bulk of prospective owners. It’s more than likely that the group behind the SK Summer Soccer Series is one of the former.


The SK Summer Soccer Series organizers have stated that the event will be back next year, with SK Selects coach Bryce Chapman revealing that the group was working with Canadian Premier League clubs to organize a match against a CPL squad in 2020. While the SK Selects have faced the Calgary Foothills, Vancouver Whitecaps U-23s, and now Toronto FC II, they have yet to square off against the CPL opposition they hope to face against in league action one day.

Whether that happens or not remains to be seen, but the SK Summer Soccer Series has certainly put the ball in motion.