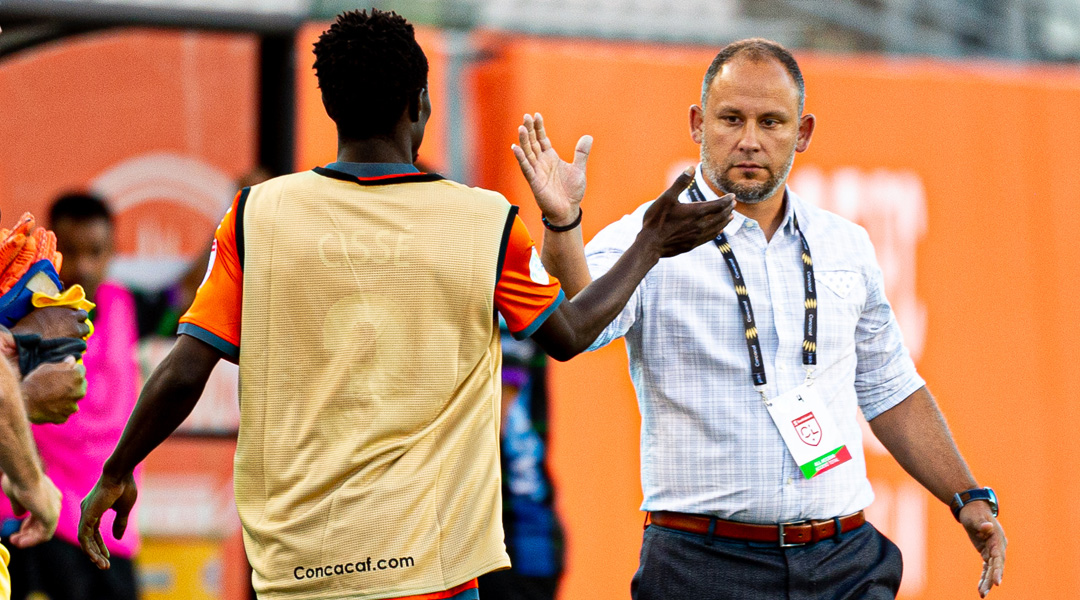 With Forge FC having won its first-ever CONCACAF League game with a 2-1 home win over Antigua GFC on Thursday, the club has the entire week to prepare ahead of its away leg in Guatemala.

For head coach and technical director Bobby Smyrniotis, that means the club has time to analyze its opposition and craft a game plan ahead of the CONCACAF League away trip. After training today, the Forge FC gaffer offered his thoughts on the upcoming fixture, and how he plans to prepare for it:

We’ll be able to watch them play today as well, they play their league match today so we get a little bit more info and a look at them, and see what else differently they can do, but we get a lot from the game we played on Thursday, and I think it’ll be very similar as we go in there on Thursday. Maybe a little bit more to their step playing at home, but when you look at these fixtures in a cup competition, the goals and the results all matter so it’ll be interesting to see how both of us take it tactically.

The Hamilton-based club is now without Mississauga-born striker Emery Welshman, who is pursuing a playing opportunity overseas. The flashy striker has been a crucial cog in the Forge FC attack, contributing three league goals himself and frequently playing provider to the likes of Tristan Borges and Kyle Becker.

It was a pleasure to have him here. He was a player that I’ve known for many years. I think he’s got a great opportunity coming up ahead for him. It’s something that we were prepared for from the beginning of the year, with his loan being up until the midseason with the ability to extend it, but obviously it was a very good opportunity coming overseas. I think it’s a great challenge for him, and we look forward to his success as he grows over there.

For his part, Welshman seems to have enjoyed his time with the hammer: in his goodbye statement on Twitter, he told fans that it wasn’t a goodbye – it was a see you later.


Still, the departure of the striker brought speculation that Forge FC might enter the upcoming away leg with a defensive mindset, especially with the recent addition of Canadian international defender David Edgar. As Smyrniotis stated, however, it looks like he expects that his club will be playing against a high press form Antigua GFC, who know they need a goal and will be buoyed by a hearty home crowd.

While Forge FC will have the entire week to prepare for of the game, Antigua GFC plays a league match today. According to the Forge boss, however, that may not be a big advantage for the hammer:

Sometimes you can say it’s a benefit, but then I look back to our team over this year and when we’ve played three games in a week we’ve done a great job, although most people say it’s not possible. It all depends. They’re in the beginning of the year, so I think it does a toll on them a little bit from the travel they had up here, to getting down and playing a game today, and then getting themselves prepared Thursday, but they’re a quality squad and I think they’ve got some good depth throughout that squad to be prepared for us on Thursday night.

Forge FC certainly doesn’t have an advantage when it comes to depth, as it only has 21 players to work with. It’s also unclear how many players the Hamilton-based club will ultimately bring to Guatemala. Canadian Premier League teams have frequently brought less than five substitutes for away fixtures in the league, though the opportunity to progress in the CONCACAF League may convince the Forge ownership group that giving Smyrniotis the maximum number of options from the bench might be a good idea.

If the club can secure an aggregate victory in the second leg, it’ll then face Honduran side CD Olimpia, who are rumoured to be selling 24-year-old winger Michaell Chirinos to the Vancouver Whitecaps. The club won the inaugural CONCACAF League competition in 2017, and will provide stiff competition to whichever side progresses beyond the qualifying round to face them.

Whatever happens, Forge FC has represented the young Canadian Premier League well during its first foray into CONCACAF action. The possibility of scoring goals in a continental competition was one of the main reasons David Choiniere signed with the club, so one can only imaging what progressing would mean for the Quebec-born player and his teammates.


If Forge FC finishes as a top six side in the CONCACAF League, it will also qualify for the 2020 CONCACAF Champions League – and that brings with it a renewed spotlight on players that, like Welshman, are hungry to prove themselves overseas in the future.

Giving Canadian talent an opportunity to showcase their talent at the professional level was what the Canadian Premier League was made to do, though it’ll be interesting to see how outbound transfers will impact the shape of the league once the fall season concludes and players on one-year contracts evaluate their options.

That’s all future-forward thinking, however: for Bobby Smyrniotis, his sights are firmly set on this upcoming Thursday. Fans based in Canada can catch a livestream of the match on TSN Direct, while fans outside of Canada can purchase a match pass on CONCACAF Go.